Zombie Hill! (And Other Halloween Fun)

Bay View does a lot of Halloween decorations in October, but hands down the best display every year is Zombie Hill on Kinnickinnic near my kids' school.  (And I never get tired of the word "Kinnickinnic.")

How awesome is that?  The first few zombies appear on the hill on the first of the month, then more, and sometimes they get moved around (usually closer and closer to the sidewalk as the month progresses). 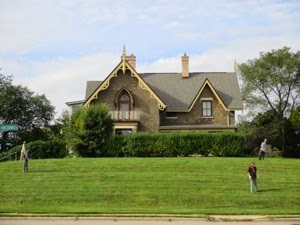 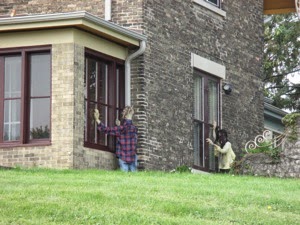 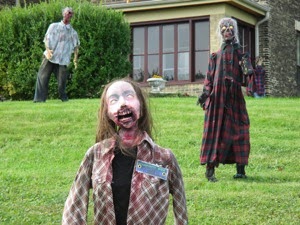 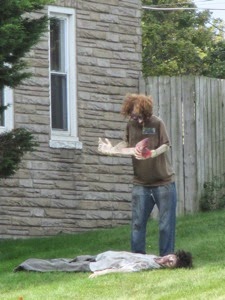 The guy eating someone's arm is new this year.  At night they are SUPER CREEPY.  On a windy day they sway and jerk around a little.

My kids and I were speculating on how funny it would be if they were up year round, and got decorated for other holidays.  Lights and tinsel for Christmas, bunny ears for Easter, green hats for St Patrick's Day....  And then they could hold pumpkin baskets or dress up when Halloween comes around again!  But I suppose it's best to put them away in November so we can look forward to their arrival again the following year.  And we do! 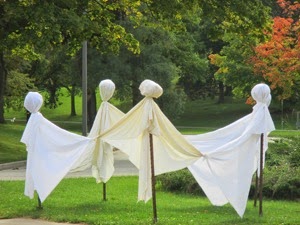 On the less scary side of decorations in our neighborhood are the dancing ghosts in the park, and there is an annual event called the Pumpkin Pavilion with hundreds of carved pumpkins on display for a weekend (along with music and a magic show and games and beer and food).  My husband was trying to impress upon our kids how nice it is to live only a couple of blocks from a park that always has something going on.  He said the park by his house growing up in Portland never did anything.  Humboldt Park is pretty great. 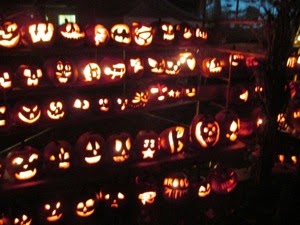 We did our own pumpkin carving a couple of weeks ago.  The kids did all their own pumpkin gutting!  I just cut open the tops and cooked the seeds.  I also let the kids experiment with using a drill.  Pretty fun.  Less dangerous than knives.  I did one all just in patterns of dots, and Aden used the drill to add stars to her wolf pumpkin. 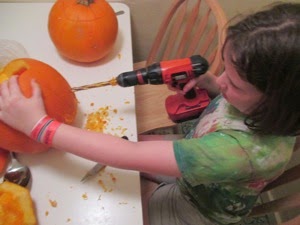 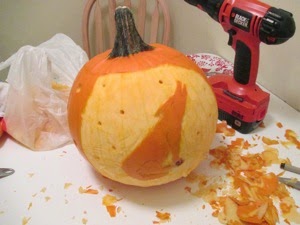 It continues to be weird that for us Halloween is over before most of the country gets to it.  Everything here (except the zombies) is pretty much all packed up and put away.  Our neighborhood does nighttime Trick-or-Treat on the last Saturday of the month, which meant we had it on the 25th this year.  The weather was perfect, and after doing Trick-or Treat in our own area first we even drove over to the other side of Bay View by the violin store to experience a street that is blocked off for a good distance (so you can walk safely in the road) and goes all out with the candy and fun.  One house was a giant Wizard of Oz display, and another was surrounded with psycho clowns.  It's a big, spooky block party and we will definitely go back.

Since Milwaukee at large does Trick-or-Treat on the Sunday before Halloween, my kids also got to go up to the north side of town to Trick-or-Treat with friends there.  They enjoyed the extra candy and another day to wear their costumes, but they all agreed Trick-or-Treat at night is better.  (Duh.)  Next year will be bizarre because I think Halloween is on a Saturday, so our neighborhood will have it on Halloween proper, but the rest of Milwaukee will do Trick-or-Treat on Sunday six days earlier.  That will stretch out Halloween for a week! 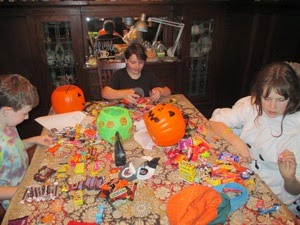 The sorting and trading of candy in our house goes on for days.  They still had some from last year to add to the piles, which is sort of ridiculous, but sort of good in a "at least they are not eating it all at once and making themselves sick" kind of way.   Aden set aside candy for a friend who wasn't able to Trick-or-Treat at the last minute because of an injury, and made sure to examine all the labels for nuts.  Apparently there were more Twizzlers this year than last, and the oddest candies were "Lemonheads with Friends."  Quinn had the only regular Lemonheads, which were sadly friendless.  (I think this is the first Halloween of my life where I haven't eaten any candy.  I'm being good about the no sugar thing.  And the kids will be surprised at how their chocolate doesn't vanish while they're at school this time around.)

The only bad part about the holiday for us this year was after my kids spent a whole day putting up decorations in the yard someone stole some of the things from their display.  Mona had woven a toy snake up through a plastic skeleton so that it popped out of its mouth, and she also put a pair of creepy eyeballs in the skull, and someone took the snake and the eyeballs.  The snake was a souvenir from the Bronx Zoo that my kids were really attached to, so they were pretty upset.  I had told them we could go ahead and leave their display up through the actual Halloween, but after the snake disappeared they just wanted to bring everything in.  So, as I say, Halloween here has been done for days.  The pumpkins are composting and we're moving on to birthday plans and Thanksgiving. 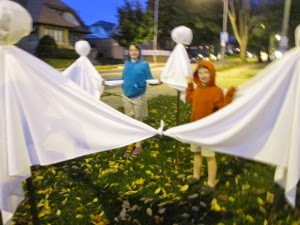 But you out there!  Celebrating holidays on the days they are supposed to be on!  Have fun!  I hope everyone has a Happy Halloween.
Posted by Korinthia at 7:45 AM