Whew!  It's a long drive to New York from Milwaukee.  We did the trip home in one straight shot, too, so between that and spending the first few days back desperately trying to catch up on the workload at the store I'm only barely feeling recovered, but I think I'm finally ready to get some of this down on my blog.  Brace yourselves for a long post of too many photos and a whole lot of everything while I still remember any of it. 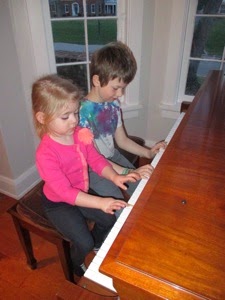 The kids and I hit the road very early on a Saturday and drove as far as Ohio.  (Ian had classes to teach and flew out to meet us in New York later.)  There we stayed with my wonderful aunt and uncle and got to see my cousin's new house where we had a big family dinner.  Seen here is the cuteness that is Quinn playing on the piano with his cousin Kate:

We love visiting Ohio and hate that we don't get to do it more often.  Our family there is so loving and welcoming and we have equally generous and kind friends whom we're hoping to see sometime this summer.  It was too short a visit since it was really just an overnight stop to give me, the lone driver, a break, but it was great.  When I went to tuck Aden into bed and hugged her, she hung onto me as I tried to stand up and said, "We have to come stay here again."  I promised her we'd find a way.

The drive from Wisconsin to Ohio was dominated by getting through Indiana, which takes forever and is incredibly dull.  Usually there is at least the excitement of seeing lots of windmills a couple of hours in, but this time they were all still, which was a little eerie but mostly boring.

The drive from Ohio to New York was dominated by Pennsylvania.  It takes forever to cross Pennsylvania, but it's beautiful, so that helps.  My kids like to do a countdown as we come to state borders, and they couldn't believe how long we had to drive through Pennsylvania before we hit New Jersey.  (Wait until we eventually do a drive out West!  They have no idea how big some states really are.)

We arrived in New York City in time for dinner.  Kids were thrilled to be reunited with their cousin and to get to meet her new puppy, Pepper.  Pepper is adorable.  Teeth like needles and in a "must nip and chew on everything" mode, but adorable nonetheless.  Pepper needed frequent walks and frequent naps. 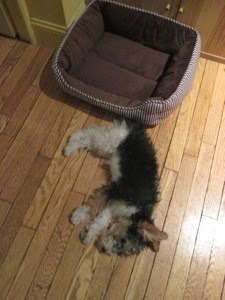 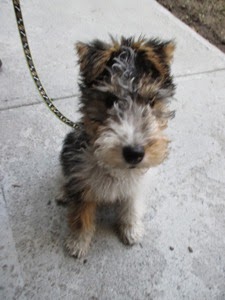 I know many really good parents.  All of them confess to yelling at their kids at some point.  All of them regret it to some degree.  It feels out of control and inappropriate.  Yelling at your kids makes you feel ashamed.  We want to be better than that.  Since we know we don't want to be that and we do it anyway we feel like we've failed every time it happens.  Arguably there are moments that's true.

I yelled a lot more back when Ian was deployed and I was doing everything alone and under great stress.  I wrote about it on Babble when I was blogging there, and got a lot of interesting feedback, mostly from other moms who were relieved to know they weren't alone.

However, my kids are now 12, 10, and 7, and I want to share something I've learned about the yelling:  Your kids train you to do it.  Most of the time we do it because it works and that's that.  We don't yell because we are out of control, we yell because it's efficient.

How do I know?  Because yelling only works with one of my children. 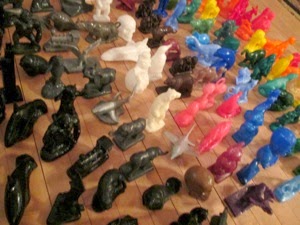 We could always count on my dad to try and trick us every April Fool's Day.  The version in our house growing up was extremely mild and always involved his telling us at some point that there was "a pig in the sink" and/or "a duck on your head."  He'd usually get us with some story about having the car repainted or something along those lines.  We didn't do pranks, and there were never lies designed to upset anyone.  (Unless briefly thinking you had a duck on your head was upsetting.)

My children, however, are sensitive and literal.  They don't like teasing.  They don't approve of lies.  They don't like pranks.  I did get Quinn to run down to check if there was a pig in the sink this morning before he figured out what day it is.  And I tried to convince the girls that the balloon/tissue/glue/paint project that has taken over our kitchen table was chewed up by dog after they went to bed, but Mona didn't buy it.  (Despite the dog looking appropriately guilty, but he's always guilty of something.)  Mona reasoned: Why would the dog suddenly want to chew on that?  It's been out for a couple days!  Are you fooling me, mom?  (I told her yes, but there really was a duck on her head.)

Today I sent out an email to a few people telling them there was a mix up at the groomer and now Chipper looks like a mini-panda, but at least we didn't have to pay for the dye job.  I've fooled two people that I know of with that this morning, but not my brother who knows to be wary today.  The most successful April Fool's joke I ever played was when Quinn was a baby and I told everyone that he said his first word but it was a swear word and I didn't know what to do about it.  Nearly everybody bought it, including my dad, so that was a good one.

I tried a really minor deception on the way to school but then the kids became unhappy and asked me to please stop.  Ian told them he just doesn't listen to anything I say on April first.  A sensitive lot I live with.  Luckily there is Facebook, and I announced a "reverse sale" at the store where today only everything is One Million Dollars.  At least if someone falls for that we can retire.

So be a little cautious today!  And try to forgive those of us who are used to being trustworthy and just want to play a little for once.  You can trust us again tomorrow.

(And, seriously now, there is a duck on your head.)