Some days you don't get to pick your attitude.  I know there is many a pithy quote to be found on Facebook about choosing a positive thought and about how all you can control is yourself so you have only yourself to blame if you are not happy.

Well, when things are on an even keel, sure.  Some days, though, we need to cut ourselves some slack if we don't have the energy to force some more noble perspective.

My birthday is this week and I'm not feeling good about it.  It's my first birthday without my dad.  His birthday would have been on Easter this year and it's the first one of his since he died.  I don't like these kinds of firsts.  I keep tearing up unexpectedly.  I can go weeks at a time at this point where I don't think of dad in terms of loss, just in terms of pleasant memory, but not this weekend.

I'm often surprised when talking to my children how little I really know about their lives anymore.  We have such a tight grip on everything about them when they are tiny that it's hard to shake that impression of our role even as it changes.  I used to have responsibility for every detail of their days, and now they select their own entertainment, seek out their own books, enjoy inside jokes with people I've never met, and eat foods I had no hand in. Like most of parenting it's bittersweet.

But every once in a while I make a point of grilling them past the one word answers I'm used to getting and try to find more information so I'll understand them better.  Most recently I did that with Aden and her latest computer obsession and I learned a lot.

Compared to most of the kids we know, mine own a fairly limited amount of technology.  They share a single iPad that they got as a Christmas gift a few years ago from their aunt.  (They have about a dozen apps on it, which their friends with pages and pages of apps to scroll through find amusing.)  Aden has a laptop we got her with schoolwork in mind, and a DS thingy that I don't quite understand, but it wasn't expensive and she mostly uses it as an awkward means of creating her own animation.  A few months ago we hooked up an old Atari to the TV, and Quinn enjoys playing Frogger and Pitfall II.  We have Netflix streaming but no cable.  None of them own phones. 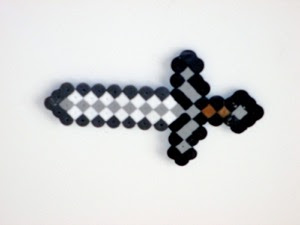 Despite this limited access to modern devices, my kids are well-versed in current video game culture.  Aden is obsessed with the Legend of Zelda and can tell you when the latest version of GTA is out.  My kids are all into Minecraft and make many small items in its image out of perler beads.

I've offered to my kids to get them a modern gaming system if they feel left out among their peers.  Same with phones, actually.  Just because something doesn't interest me doesn't mean I want them to be out of step with what the culture they live in is up to.  But they insist they are fine.  They don't mind sharing the iPad.  They don't need video game options beyond what the box of vintage Atari cartridges offers.