Next was learning how to follow an actual game.  We knew basics about boundaries and rotation, etc. but a lot of details were new.  I didn't realize the cup of your palm could never touch the ball.  And if the referee decided you had the ball on your fingertips long enough that you were moving the ball in a guided push rather than popping it quickly, the point went to the other team.  I also didn't know your body was required to face a particular way in relation to your hands when setting a ball.  The referee was always happy to answer our questions on such points when we asked.

The referee was great.  She was a young woman who obviously had a lot of volleyball experience and she brought her pure joy for the game to the court every week.  She always had an encouraging word for players on either team and often reminded them to remember to stay on their toes, never give up, and have a good time.

We had one day of drama where Aden's team was up against the other top ranking team and there was confusion about the time.  The game started earlier than was originally scheduled, but due to a misunderstanding we hadn't gotten an email, so we arrived halfway through the second of the three games.  Aden was so upset and embarrassed, feeling she'd let her team down by not being there, that she didn't think she could face anyone.  I told her this was the true test of being there for her team--stepping up when it's uncomfortable, not just when it's easy.  I wasn't able to convince her to go join everyone in the gym, but the coach's daughter was.  Aden came out and joined her team on the bench in the last few minutes, and she told me later I was right and she should have come out sooner.  Her team was so welcoming and supportive and glad to see her that she realized she shouldn't have worried.  I told her to try to remember that part of the experience in the future should she bump up against such crippling feelings again.

The very next game was forfeited by the other team for some reason, and instead of dividing up their numbers and playing against themselves for practice the way they did the previous time that happened, the referee cobbled together a pickup team (from people from earlier games who happened to still be hanging around, the coach's daughter, etc.--plus she joined in herself) and played a game and a half against Fernwood.  The coach climbed the ladder by the net and played referee.  That whole round of play was so incredibly enjoyable!  Everyone was playing for the sheer fun of it and it was a pleasure to watch.

At the end of their last game everyone on the team got a medal for finishing the season ranked number one.  Aden's very proud of her medal.  She told me she appreciates the ribbons and things she's been given in the past to commemorate participation in recitals and whatnot, but that this medal means more.  (I've never understood people who complain that such keepsakes handed out to children somehow devalue everything.  Kids know the difference.  Aden understands how this medal was earned in a way other things were not.) 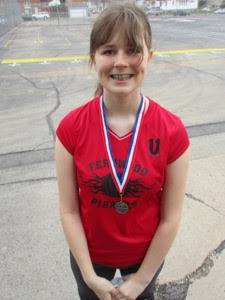 I'm proud of Aden for working so hard at something so new.  She wants to continue on with volleyball next year, so if her high school doesn't have a team we may find her something through Parks and Rec.  I love my volleyball girl.
Posted by Korinthia at 11:33 PM