We had a relatively low key, but warm and happy holiday weekend.  The biggest part of it was in advance of my daughter's birthday (and taking advantage of a Black Friday sale) we got her a bird.  We offered her one a year ago, but she didn't quite feel ready.  She's since done her research and finally feels prepared, and now the bird is adapting to us and we are adapting to the bird.  More details on all of that later as things progress and eventually I can get a good picture.

I can share some other birds, though.  The kids did custom made turkey decorations for each place setting this year, and I asked for a robo-turkey, and Ian asked for an 80s-music-turkey, and Aden delivered. 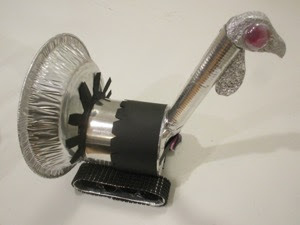 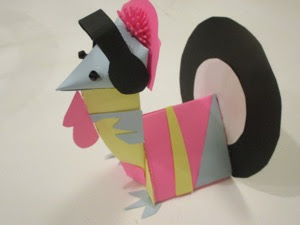 It was a good Thanksgiving.  One that has me simply appreciating the place where I am now.  Some of that is circumstance, and some of that is perspective.

I have reached a point in my life where I have officially abandoned the illusion that there is impending calm around the corner.  You know that sense that "If I can just get past...(fill in the blank with the hassle or crisis of the moment here)...everything will be okay and I'll have time to relax and can get stuff done I've been putting off."  Yeah, no, that will never happen.

I recently returned from this year's Violin Society of America convention in Cleveland.  I had a great time, and am looking forward to writing a post about my experiences soon, but first I wanted to share my part of a panel discussion I was privileged to be a part of.

We got to talking at last year's convention during the women's luncheon (which is a nice place for women in the industry to connect since there are so few of us) about what we experience in terms of discrimination.  The esteemed Marilyn Wallin gave a brave speech about some of the things she's endured, including a man tearing up a check for an instrument of hers after he discovered a woman had built it and then declared the idea too disgusting to contemplate, to the fact that women in the early days of the violin making schools were not allowed to build cellos.  (She had to hire one of the male students to teach her.  Marilyn currently makes some of the best damn cellos on the planet.)

It sparked quite a conversation as everyone began to share their own stories.  Everyone has them, which is very much what the MeToo movement has been about.  As we talked over lunch and beyond, I started to ask why we weren't sharing these stories with men.  We know all these problems are ubiquitous.  It's men who do not.

So we decided to put together a panel discussion for the next convention, and we collected stories that women were too uncomfortable to attach their names to and edited them enough to provide anonymity.  I wrote the intro, my friend Robyn read the stories, and Marilyn contributed a new piece before I read a closing, and then we turned the discussion over to the audience.  The only real stumbling block we had was that various people in charge of organizing the talks at the convention kept trying to change our panel into one about general diversity, at one point promoting it as "How to Bring Diversity to Your Shop!" which struck me as a terrible bait and switch that would understandably upset people. I tried to address the diversity issue a bit (which is incredibly important, just not what we were doing), but was relieved when the wording was changed in the program before it went to print, and finally read "Panel Discussion: Experiences of Discrimination in the Workplace."

For anyone who is interested but couldn't attend the VSA convention this year, here is my talk:

I just wanted to take one last moment to post pictures of my kids in their costumes from this year.  Still impressed that 1.) Mona made hers pretty much on her own, 2.) We got Aden's done so last minute, and 3.) That I actually pulled off building a chimera outfit for Quinn in my spare time. 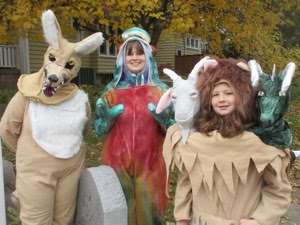 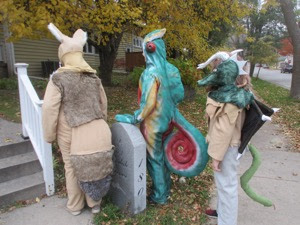 Shout out to whomever the guy was in our neighborhood that the kids said was able to identify all three costumes correctly at his door.  He actually said without prompting, "Jackal, Chameleon, Chimera."  That dude wins Halloween.

My kids also got a sense for the first time how unusually lively Halloween in Bay View is compared to the average neighborhood.  We went through over 400 pieces of candy before we had to go inside and shut off the porch light.  So many cute kids!  Our neighbor down the street was out as usual with his light up roller skates and juggling clubs entertaining everyone, people were out on their front steps to greet the crowds, adults were dressed up (sometimes as part of a theme with their kids--we saw a whole Incredibles family), and the party across the street shared some great chili. 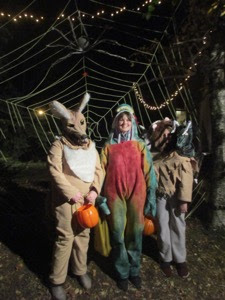 Then we hit the street behind the violin store where they go all out and there was a porch of dancing dinosaurs with disco lights that rocked for hours, a giant spider web to pose in, and just blocks and blocks of happy people.  One of my favorite things was a bit of city construction work that someone decorated.  I didn't think to get a picture, but it was a ripped up bit of sidewalk with barricade around it, and someone had filled it with little headstones.  One house was playing silent horror movies on a big screen on their porch.  Another had giant dinosaur skeletons on the lawn and a T-Rex handing out candy while roaring.  (I know some of the houses in that part of Bay View go through closer to 2000 pieces of candy.)

We even stopped in Mona's high school on the way home where they had games and music and candy for anyone who wanted to participate.  It was all great. 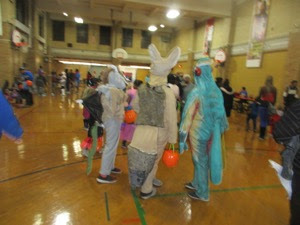 But then the next day during the city-wide daytime trick-or-treat, I took my kids up to a more affluent neighborhood where we have a relative because they wanted to see her and to wear their costumes one more time. 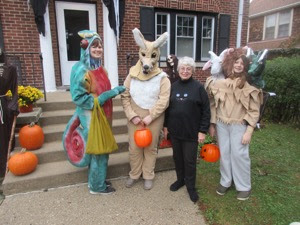 It was different from what they were used to.  People were in their homes and you had to go up to the door and ring the bell.  Most people weren't home, but it was hard to tell which houses they should try.  Several houses just had bowls of candy sitting unattended on the porch.  We saw a few other kids out, but not many.  My kids were really confused.  They kept asking where all the music and crowds were.  I told them this looked a lot more like what trick-or-treating is most places.  It's not the extreme decorating event it is in Bay View.  One house even decorates both stories and the whole yard as part of an elaborate theme each year and puts out a donation box that collects thousands of dollars for charity.  So when I say people decorate, I don't mean just a few pumpkins.

And I don't mean us--other than a few broken skeletons we just have our few pumpkins. 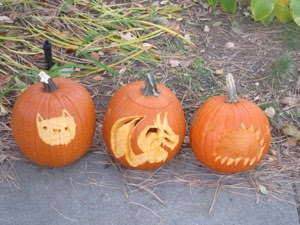 We do, however, have a real headstone that astounds people every year who touch it and go "What!?" 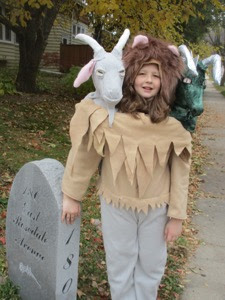 On the downside, trick-or-treat wasn't as exciting in the wealthier neighborhood, but on the upside, they gave out full-sized chocolate bars, so there was that.

You know what I like best, though, about Bay View Halloween?  It's inclusive.  I know there are kids at our door who are coming from other, less safe neighborhoods, and I am happy they do.  I want them to feel welcome on my block, and they do.  Also, right before a contentious election, there was something great about seeing people celebrating together regardless of the names on the signs stuck in their lawns.

There are also no limits on age.  Everyone dresses up who wants to, and my teenagers are praised for dressing up and being creative and not looked at with scorn for being too old.  My favorite costume this year was a man dressed in orange with a bunch of orange pool noodles tied to him, and after a minute I realized he was a big metal sculpture downtown called The Calling (which most people refer to as The Sunburst).  When I asked him if I was right, he smiled and called the woman he was with over and she stood by him and lifted her arms which had white blinds under them like wings, and she was the Calatrava addition to the art museum.  Another woman with them was the weather.  It made my night.  This is the world's worst photo of them, but I want to share it anyway: 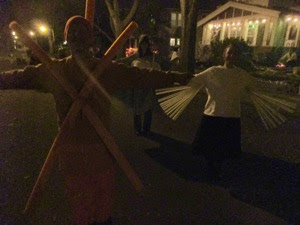 This has been a year of my children being more vocally appreciative of the good things they have that they are beginning to realize are not universal.  Mona actually told me at one point this summer when were walking along the lake that she's glad to have grown up here.  This Halloween they all looked at me and said they were happy to have had such tremendous fun with that holiday in our neighborhood all their lives.  I am just fortunate to have been able to give them that.