I have the privilege of playing with a wonderful group of musicians here in Milwaukee in an orchestra called Festival City Symphony. Once upon a time they were the Milwaukee Civic Orchestra, but they changed the name to Festival City (which reflects the exciting number of festivals Milwaukee hosts annually) a couple of years before I moved here.

It's an orchestra comprised of people who take music seriously, and probably majored in it, but performance did not become their day job. There are a lot of music teachers and gig musicians and freelancers, but many who do any number of other jobs to pay the bills and still make the time for orchestra. Because if you grew up playing in an orchestra, it's hard to picture life without it.

Many musicians got a taste of life without it during the first year of the pandemic and it felt like missing a limb. Festival City canceled the end of its season in the spring of 2020, but started up again with many protocols in place in the fall. I ventured back into rehearsals and onto the stage earlier this year. It's been a relief and a challenge all at once.

The opening of this season, however, was remarkable. We are in a new exciting space. 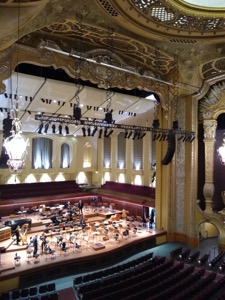 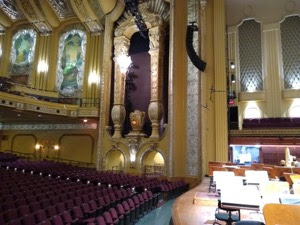 Our concerts pre-pandemic were in the Pabst Theater. It's beautiful, and has my favorite chandelier. During the pandemic we shifted to a hall out at the Wilson Center, which was fine. (A bit of a haul out of the city, but fine.) However, for several years the Milwaukee Symphony Orchestra has been renovating an Art Deco movie theater in the heart of downtown called the Grand Warner. It has sat closed the entire time I've lived here, and I only heard stories from people about how beautiful it was inside. The MSO acquired the building and put a lot of effort and money into moving walls to create a real stage, and expanding the building with a modern addition to the side. The grand opening was supposed to be fall of 2020. They only just moved in recently.

One of the benefactors who donated money to the whole enterprise happens to be a former Festival City musician. He loves our orchestra and knows its worth to the community. He managed to carve out a deal that allows us to perform in that gorgeous building as well.

Now, I'm a bit sad that the last time I performed in the Pabst, I didn't know it was the last time I was performing on that stage. The plan was always to move on to the new Bradley Symphony Center inside the Warner theater for this season, but with the previous season cut short and then the venue moved, we didn't finish at the Pabst the way we expected to.

However, what an incredible experience to play in a hall that is specifically designed for an orchestra. Not a space that is designed for a variety of events that an orchestra can also use. This new hall is conceived entirely around what a symphony orchestra needs and you feel it at every turn.

First of all, just from an anyone perspective, the whole building is stunningly beautiful. In centuries past, the grandest structures that money could buy in any town were usually places of worship. In modern and more secular times it seems to me that museums and concert halls are the new cathedrals where society places the greatest importance on design and beauty in order to cradle and showcase the achievements of which we are most proud. This new hall is no exception, and is one of those landmarks where you feel a tad smug that people outside of Milwaukee don't know what they're missing. The great things in our city don't tend to be for tourists, since nobody visits Milwaukee without a reason. There's something extra special about stepping inside a beautiful concert hall that is intended for us, the locals. I hope everyone in the city gets a chance to enjoy it and feel inspired there. 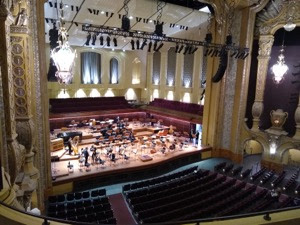 This is the point where I'm going to apologize for not having better pictures. (Go look at the pretty ones in that first link when you have time.) Most of what I had access to was from the stage or behind the scenes, and when I went out in the general areas to explore, I kept hearing staff on their modern walkie-talkies behind me sharing the information that, "The musicians are wandering." I was eventually gently herded backstage, but not before I poked my head onto the balcony to see what things looked like from that direction.

There are restored paintings on the walls of very white people doing very stylized rich people things which are both pretty and kind of funny. 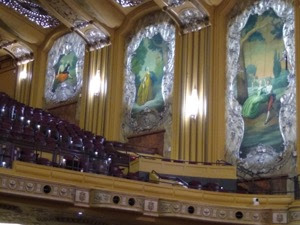 I miss the chandelier from the Pabst, but it makes sense that in a theater originally designed for movies one wouldn't have made a lot of sense. But there is a lovely ceiling nonetheless, and a couple of elaborate light fixtures hanging off to the sides. 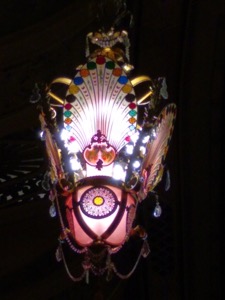 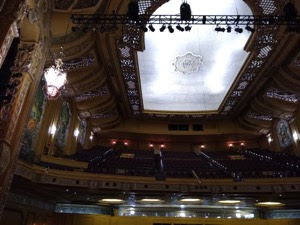 And I only got a glimpse of the lobby from above, but it was all just gorgeous. 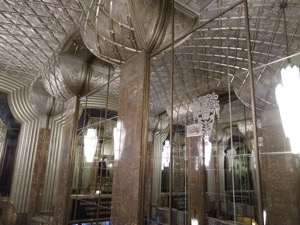 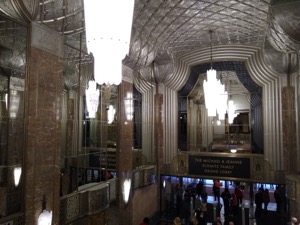 And everywhere you look there are restored details to admire (like this one little piece of a bit of railing at the top of the stairs). 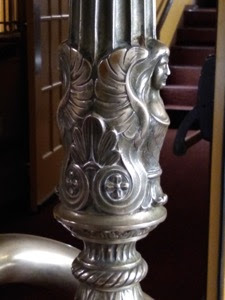 One of the other details I enjoyed was where they left evidence of the original outside walls. I noticed in the alley I walked through next to the building when I was trying to find the stage door, that there were old painted warnings on the brick admonishing people not to park below the fire escapes (which was amusing since there are no fire escapes on any of those walls now). Some of those same warnings are now inside the building! I love that they left that when they expanded beyond those walls. 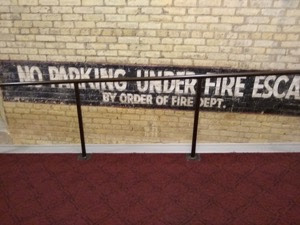 So that's the kind of stuff everyone can get to enjoy. My perspective is generally more like this: 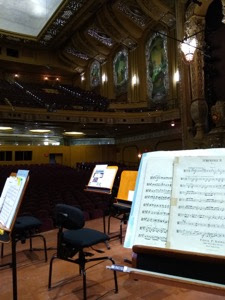 But here is a good place to start pointing out cool musician oriented details! First of all, the stage chairs are fancy. I don't know if they are smart, because we had to get a tutorial at the beginning of the rehearsal mostly to inform us that the two levers under the seat must only be ever pulled up. Apparently if you push down on them (and everything about them suggests you should push down on them) they will break. One lever adjusts the height of the seat, and the other the angle, but I was too scared to touch them and decided I was fine with whatever height and angle was there when I sat down. But they were very comfortable and excellent for orchestral playing,

The other thing is the stands. I wasn't sold on the chairs, but I want one of those stands. 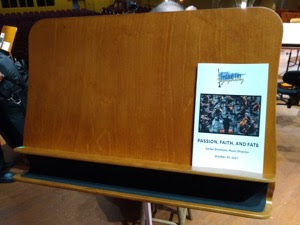 It was solid, wide, and smooth (the most common type of stand has inexplicable bumps on it that sometimes interfere with marking a paper part with a pencil), and best of all had a lower shelf lined with a grippy material perfect for setting your bow in. (And considering there's an entire movement of the Tchaikovsky symphony we played that's all pizzicato, that shelf came in handy.)

That shelf is also perfect for pencils, rosin.... I love the shelf.

Only less than optimal thing was the height adjustment required you unscrew something first, but eh. You don't do it that often anyway.

The brass and woodwinds had their own sections on risers. And there are seats behind and on the sides above the orchestra that I assume are for singers. 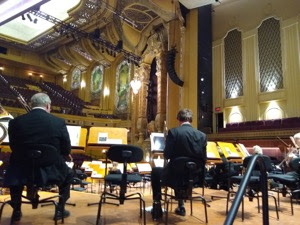 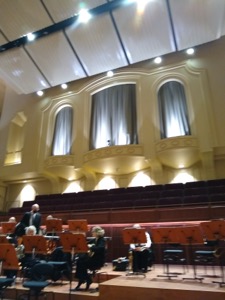 But it's the stuff offstage that I think I appreciated most.

At the Pabst, the green room was under the stage. It was okay. There were some tables and chairs, a couch or two, inadequate bathroom facilities, a TV that was only on when players wanted to check a Packer game. There were dressing room spaces that some people used to unpack their instruments and store their cases and coats, but most of us found space to balance our things on random beams that were the structural supports behind the adjustable stage walls. There were a few tables on one end, and cellists tended to prop their cases along a wall, but not too close to the hot pipes. It was dark back there, and dirty. It wasn't really where we were supposed to store our things, but it was the most convenient place in terms of proximity to the stage.

The new building? Well, the green room is across the hall and on the same level and includes monitors of the stage. 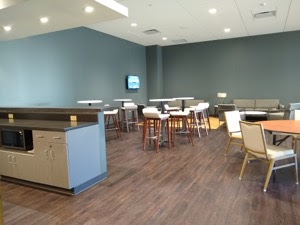 Lots of light in this building, and lots of windows. And I noticed signs indicating practice rooms upstairs, so that must be nice. 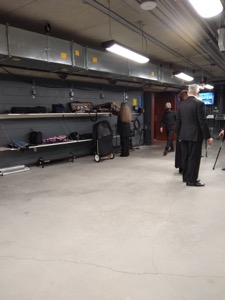 And in the wings around and behind the stage there was so much light and useful storage! Not to mention several mirrors, a couple of large monitors so you could see the stage, and lots of room to move.

Even the chains on the shelves had little plastic covers on them so you wouldn't snag yourself on anything. It was great to have an actual spot to set my case right off the stage. 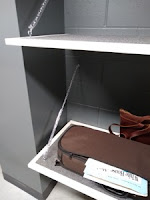 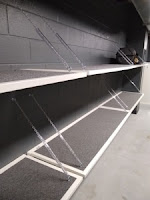 There were cubbies for cellos on their side of the stage.

Also? Amazing security. That place was on top of everything (including "wandering musicians"), so I wasn't worried about leaving any of my stuff backstage.

This concert was also the first event I've attended since the pandemic began that required proof of vaccination (or two negative tests within a few days), and nearly everyone was masked, so I was far more at ease in such a crowded setting than at anything similar in recent memory.

And aside from all the beauty and practical details? The hall sounds incredible. Which is truly the whole point. The sound engineers and acoustics people did an astonishing job. It's almost a little too good, in that you can hear everything on that stage and you become very self aware. I took my necklace off after the sound check, because the clicking sound it made as I put my instrument to my neck seemed like it might carry to the audience. Probably not? But it sure felt possible.

I'm pleased to report the concert itself went well. We played Dvorak's Carnival Overture, Bizet's Orchestral Suite from Carmen, and Tchaikovsky's Symphony Number 4. And I have to say, the sound of the brass reverberating in the hall in the rests following their big opening chords of the symphony was really something. It is a magical place to hear the power of live music.

If you're in the area and want to experience something grand, I highly recommend you get a ticket to whatever is happening there. (And Festival City Symphony concerts are free! Come join us! This season's schedule is here. William Grant Still, Aaron Copeland, Mendelssohn, Schubert... lots to like.) 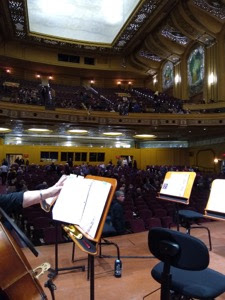 Posted by Korinthia at 1:08 AM 3 comments