What a peculiar week.  I learned again that tragedy can strike anywhere, what things matter, and what things don't.

I also learned that when you do a Google search for "violins" and "Milwaukee" apparently I come up first.  Thus I have been asked for quotes on a story that I have no real connection to because all of those directly involved can't speak about it yet.

The first I heard of the news of the stolen Lipinski Strad was from a talk radio reporter who needed to know something about Stradivaris.  He called me at work and gave me no details on what had happened or to whom.  I gave him general information about how fragile violins can be and why instruments by Antonio Stradivari are so valuable.  I didn't know why we were having the conversation, but at least what little of my recorded self I caught on the radio later that day sounded like it added to the discussion in a useful way.

Then I got a call from a local news station asking if they could interview me about it.  By then I'd searched online and discovered more details about the crime and could just not believe it.  I wasn't sure what I'd have to offer a TV interviewer on the topic, but I was willing to share what I could.

Stealing Beauty from Us All

I am shocked and saddened by the violent theft of Frank Almond's Stradivari.  The concertmaster of the Milwaukee Symphony Orchestra was leaving a performance Monday night when he was attacked with a taser and his instrument was stolen.  The "Lipinski Stradivari" for insurance purposes is worth millions, but its true value is beyond measure.  It's a piece of history, and it's been stolen from all of us.

Someone in the Audience


I had a concert this afternoon.  The orchestra I play with is called Festival City Symphony, and we perform in the beautiful Pabst concert hall.  The weather wasn't great so attendance was a bit lower than usual.

But my husband and son were there.

It can't be overstated how nice it is to have people you know in the audience when you are onstage.  I'm just a section viola player, but when there is someone specific to play for it almost feels like getting to play a solo.  I become self-conscious in a good way.  I'm proud of what I get to do, and I love knowing I'm sharing that with someone who matters to me.

Holiday Mold-A-Ramas at the Brookfield Zoo 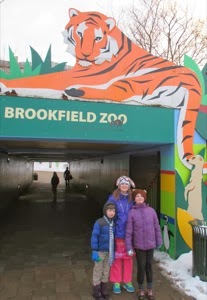 I have to say, the Brookfield Zoo in Illinois takes its Mold-A-Ramas seriously.

When we started our collection last year the only Mold-A-Rama machines we had any experience with were at the Milwaukee County Zoo.  A few of those machines are inside buildings, but several just suffer the extremes of Wisconsin weather year round.  (Even the indoor machines look a bit worse for wear.)  Everywhere else we've been the machines are in much better shape.

On a recent visit to the Brookfield Zoo again we got a clue as to why.  When we went the first time in the fall when the weather was pleasant, most of the machines were outside (but covered).  When we returned recently to collect six new figures, all the outdoor machines had been moved to indoor locations.  What a concept!

Self-Defense Starts With Getting Out Of Your Own Way

I believe most women should take some form of self-defense course at some point in their lives.  Too many never get around to it or don't find an opportunity, which is a shame.

In Bay View (our neighborhood on the south end of Milwaukee) we had several incidents of sexual assault out on the bike paths and streets last year, and one woman was shot for her purse while walking with her boyfriend on Halloween weekend.  It's unnerving to say the least.  The level to which women are made to feel unsafe in our society is staggering.  It's easily the most daunting aspect of raising girls.

In response to the assaults in our community someone organized a self-defense class last fall for women and girls ages 11 and up.  The admission fee was a donation of some non-perishable food items for a local food pantry.  I decided Aden and I should go.

Only Child for Only a While

My girls were recently at a camp for school called Nature's Classroom.  (A friend asked me if Nature's Classroom would teach them all about frostbite and hypothermia.)  The camping trip was pushed back a day due to super-extreme cold so that the kids could experience it in merely extreme cold.  They had a great time, despite the fact that helping them pack reduced me to laughing and crying simultaneously (why can't they find basic things by themselves?!?) and Mona didn't discover until a slushy hike that her boots had holes in the heels.  They came back with stories of upper bunks vs lower bunks, games for learning about bats, and a night hike where they discovered tricks for seeing better in the dark.

The upper elementary students go every year, but this was the first time for two nights away instead of just one, and Aden has been away to camp for school twice, but his was Mona's first year.  Which meant for two days Quinn was the only child at home.

It was a brief experiment in having an only child, but interesting nonetheless.  It was markedly different from having three.  I try my best to get time one-on-one with my kids when I can, but that usually means for an errand or a game.  Never, say, breakfast.

Some people express surprise that we "go to the trouble" of making pancakes or French toast or some other hot breakfast every morning before school.  The truth is it's cheaper and faster than anything else.  We have a griddle that fits over two burners on the stove and either Ian or I can crank out pancakes from scratch and have them on the table in about ten minutes from the time we hit the kitchen.  But for one kid?  I had no idea what to make for one kid.  The last time I had one kid she was still into dry Cheerios and yogurt.  I went with oatmeal because it's something the girls don't really eat but Quinn and I do, and I could make a small batch.

And I decided it was important that it was something I eat as well, because normally I leave the kids on their own to eat breakfast, but it seemed weird to have Quinn eat all by himself.

The whole experience was so quiet.  And uneventful.  The adults in the house were not outnumbered.  With three kids we are always herding people and that impacts many decisions from which car to take to when we can do things.  With one kid, well, it's like we had lives and he was there, too.

A friend of ours in town is getting deployed again.  He's headed to Afghanistan before the month is up.  This news has hit me harder than I would have expected.

People I don't know well, but who are aware Ian's been deployed at some point, sometimes ask if he's home, not realizing that he's been back since 2010.  I don't get unsolicited political commentary about our engagements overseas as often anymore.  Nowadays when people feel the need to remark on Ian's status in the Reserves they say something along the lines of, "Well, isn't it great he won't get called up anymore?"  As if all is fine in the world.  As if we no longer have troops stationed anywhere.

But he can still get called up.  There is no way to predict the odds on that today.  The first time we literally had six days notice and the thought of reliving that terrifies me.  I try not to let the idea of Ian being gone again invade my thoughts, but I can't control my dreams.  I'm not sleeping well lately.

It's cold here.  Freakishly cold, to the point where even in a city like this were everyone is used to dealing with cold they canceled school because standing at bus stops would be too dangerous.  The high was predicted to be negative nine.

So what to do with an extra day of Winter Break when it's cold?  (Besides stay inside to play board games and bake cookies?)  Make decorative ice! 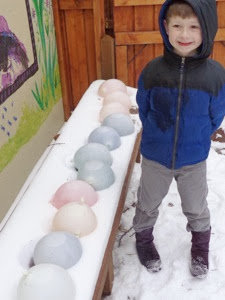 I saw a picture on Facebook last winter of ice balls someone made by filling balloons with water and food coloring and leaving them out to freeze.  They looked beautiful.  We tried it then, but it didn't work.  The water never froze all the way through and we ended up with a cold water splash catastrophe on our porch that made it rather slick for a while.

But this concept was too appealing to abandon (being such relatively cheap entertainment), so we tried it again this year during an impressive cold snap before Christmas.  And it worked!

Quinn helped me.  I filled regular balloons with water and several drops of food coloring, and Quinn lined them up on a bench in the backyard.

The next day we poked one and it cracked and started to leak, so then we left them alone for several days.  But then, success!

Let's just start off by agreeing that I am, and always have been, an excellent big sister.  I have a good memory, so no point in challenging me on this.  (Anything you hear to the contrary is Lies All Lies.) 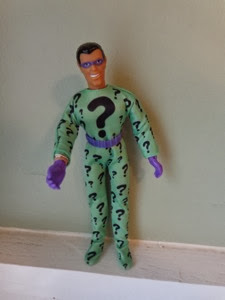 Many years ago, back when our house in Pleasant Ridge, Michigan was green, Marathon Bars were plentiful at the local pool in the summer, and bicentennial quarters were new and shiny, my brother owned a Riddler doll.  It looked a lot like this:

(They don't make villains like that anymore.  Probably for good reason.)

Anywho, to make a long story (the way my brother tells it, anyway) short, I pitched the Riddler out the second story bathroom window.