My Mona.  In some respects she's my easiest child, but in many she's the most complicated of my three children.  She's gone from being a bold and fearless toddler and preschooler to a more self-conscious and emotional grade-schooler.  She's creative and funny, sometimes reclusive but other times eager to join in as long as a group makes her feel safe.  She can work on projects silently for hours, but she can also be loud.  She's shy and silly and sweet.

Tonight I was really proud of her.  We went to St Ben's to do our monthly volunteering there, and she seemed much more at home.  She was nervous the first time, handing out forks and spoons to people in the food line and not making eye contact.  The next couple of times she handed out fruit or desserts and was better about engaging everyone.  She even brought a stuffed animal to give away to a child in the line.

This time she was comfortable enough that I didn't even have to be in her line of sight.  She and Quinn handed out desserts together and I was able to go into the back room and help wash dishes.  (Someone back there joked that I must have drawn the short straw, but the truth is I like the harder work.  I like feeling as if I'm getting something done.)

When it was time for us to go eat, an old man came up to Mona at our table and used a line on her that was intended to be charming, but was in reality a little awkward.  He said, "I bet I know your name!"  Mona smiled politely and looked interested, and then he said, "It's Cutie, right?  Because you're a cutie?"

What would you do with that?  I may have laughed a little and then turned away.  As a self-conscious ten year old I didn't know how Mona would respond.

But you know what she did?  She said, "Actually, my name is Mona.  But thank you for the compliment."  And she went back to her meal.

I was really impressed.  That was a dignified response that left the man happy, too.

Also impressive:  Mona's recent model of the Wright Brothers' plane that she made for the upcoming Science Fair at school.  (Which relates to nothing else in this post I guess, except that I want to show it off because I think it's so freaking cool.  Now that Mona has permission to use the hot glue gun on her own the sky is no longer the limit.) 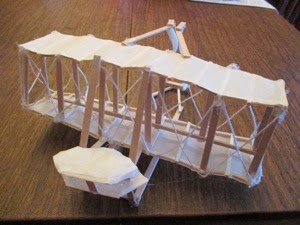 Love that Mona.
Posted by Korinthia at 10:18 PM 7 comments

All Kinds of Strangers

I read an alarming Facebook post by someone in our neighborhood right before I picked up my kids from school today.  She reported that her eleven-year-old daughter was out walking their dog when she was grabbed at by a man who wanted to get her into his car.  She outran him, found her sister, and the two of them locked themselves in their house.  She's safe, the police were notified, and everyone is on the alert.

I hate this kind of story.  I hate when a small number of people commit evil random acts and it forces the rest of us to modify our innocent behavior.  It's one of those instances of life not being fair.  It's been nice to entrust the girls with walking our dog in the morning or after school, and Quinn just last week was given permission to start walking Chipper around the block alone.  He's been so proud to be doing a truly "big kid" chore by himself.  Now I have to rethink all of that and figure out if it's worth the risk.

What a Difference a Pope Makes

I'm an atheist.  I'd say I was an agnostic because there is always room for doubt, but that term implies being more on the fence than is accurate in my case, and it seems disingenuous to use it.

Since I don't believe there is any plan or cosmic justice, I think the responsibility of caring for one another and providing our existence with any meaning falls squarely on us.  My philosophy is we should try to leave the world better than we found it, and to err on the side of compassion whenever possible.  The Golden Rule is a good idea, regardless of where you think it originated.  I honestly believe we are happiest when we are being our best selves, and when we help others instead of behaving selfishly.  Ethics are important to me, and I believe love is at the core of what matters.

The problem with a label like atheist, however, is that I'm lumped in with people based on what we don't believe, not what we do, so we aren't really a group.  We're a vague category at best, and not organized or unified by anything in particular.  There are atheists out there with whom I do not agree on much.  Many people of faith jump to conclusions about what being an atheist may or may not be based on what they assume we lack.  Most of the time the assumptions are negative, so I have found myself in situations where I'm careful not to offer that information about myself.  I don't like being prejudged.

In turn I try my best not to prejudge others.  I've known people of varying faiths who I thought were admirable, and others who were horrible.  There are people I love dearly who find comfort and inspiration in their religions and I would never begrudge them that.  There are those who cling to their faith out of lazy habit, or to prop up their egos with a sense of superiority, and for that I have little patience.  I don't care what you call your belief system.  I just care that you come to it with intellectual honesty, good intent, and that you don't use it to inflict harm. 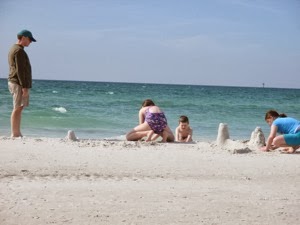 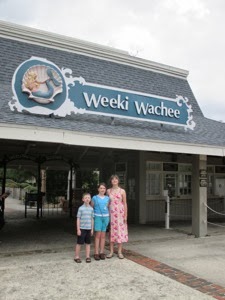 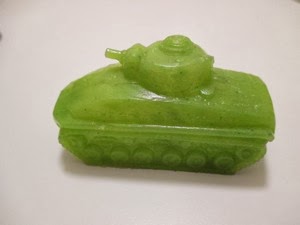 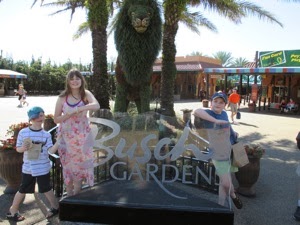 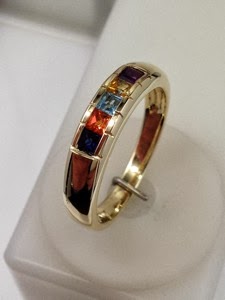 We interrupt this string of Mold-A-Rama Road Trip posts to show you my new ring!

I got this picture yesterday from the woman who made it.  She's going to bring it by the shop tomorrow.

The dark blue stone is Aden's, the orange one is Quinn's, I'm the aquamarine in the middle, then Mona is the "cheerful yellow" as she puts it, and Ian's birthstone is the amethyst.  So everybody will be there together on my new wedding ring.  And I won't wear this one in the pool, I swear.

Looking forward to wearing it!

UPDATE:  It's super comfortable and nice.  So glad I treated myself to something this special.