When my mom was visiting recently we took her on her first visit to the Milwaukee County Zoo, and what did we stumble across?  A new Mold-A-Rama!  One we've never seen before anywhere:  A cow! 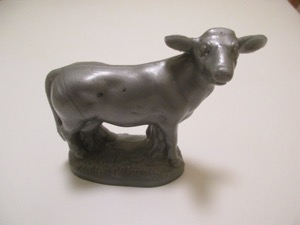 How cool is that?  We knew they had a hippo now (a rare figure--we only have one other that we found in Florida on our big Mold-A-Rama road trip) because Aden picked one up for the family collection when she was at the zoo on a field trip last month. 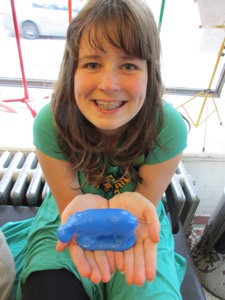 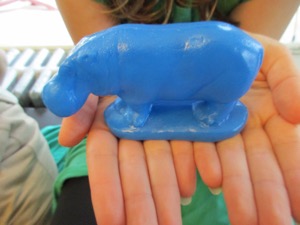 Simply because I find it easier to post here for anyone who is interested than to repeat myself for people who ask.  Anyone understandably not interested, maybe go read this old post about building our garage.  Or, if you want something more deathy there's this.  (Or something random, or something violin-y.)

I'm doing well!  The new doctor put me on steroids back at the beginning of December, and that's doing the trick.  Apparently steroids either work for people with Granulomatous Mastitis immediately or they don't help much at all.  I am in the lucky category of people for whom they seem work.

This has been the week of sorting photos.  I went through the giant stack of pictures we developed before the holidays and got everything labeled and dated.  It's a habit held over from the days before digital pictures when I would get the mystery envelope of prints from the developer and sit down with my calendar and try to remember when everything happened.  I'm glad I did, because the first four years of Aden's life are a blur to me now without those photos, and the dates and reminders of where we were mean something to me.  It's still nice to have information written out on the back of a photo, though, even if there are now high tech ways to figure some of that out.

We got our first digital camera when Mona was about eighteen months old.  The best part about it to me has always been the ability to see right away if you got the shot you wanted, and to decide if it's even a picture you want to develop, or make multiples of.  Not to mention the seemingly endless number of photos you can take to try and get the right shot.  It's hard to explain the old limitations to my kids.

When I think back to using rolls of film, the main thing I remember is having to keep track of the countdown on the roll and having to be selective about what I could even take photos of.  And seeing what pictures I actually got was always a surprise, but not one I would want to revisit.  The quality of the photos, however, I still think was better with real film.  There's a crispness to digital photos that can be great, but also somehow hard and flat.  I'm sure that's not true of professional grade cameras, but there was a softness to the pictures of my old-fashioned point-and-shoot that's different from what I get with my digital version.  Not enough to matter, but it's something I notice when I look back at Aden's baby pictures from before our jump to digital.

Another hold over from my regular film developing days is the boxes.  Not every picture I got developed was something I wanted to put in an album, but I didn't necessarily want to throw them away, either, so I'd put the spares in a photo box.  Even though I can now select what photos to develop, I don't always know until I really hold them in my hand what I think.  I also like to have choices when I'm sorting and put things in an album that tell the right story.  Sometimes that means some really nice pictures end up in the boxes, but that's okay.  They are there if I ever want them.

I was good for several years about getting photos into albums.  I have categories of albums, such as friends and family and the cottage.  I tend to put big trips together into their own albums, so if I want to remember my visit to India, or Alaska, or my car trip out West with my best friend, I can find them.  I sort pictures by what I think I might want to look for--such as photos from college, or Ian as a child.

For my children I have them sorted by kid and by age, and Quinn pointed out to me recently that he only goes up to age four, and Aden stopped aging apparently at nine.  This bothered his own need for organization (not that that need extends to his bedroom floor, but that's a different post), and I decided if I didn't get them up to date soon it was going to be too hard to ever want to deal with, so Quinn helped me buckle down and get everything sorted.

The gift I was most excited to give this year was to Mona.  It's a box of little figures made from the scraps of her old Halloween costumes. 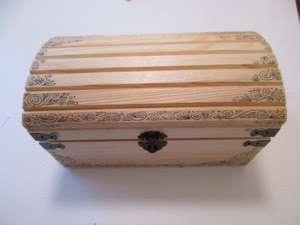 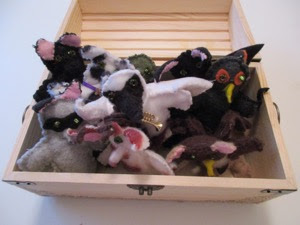 It wasn't exactly a surprise since I did the same for Aden when she turned 12, but Mona was delighted by her box.  Aden's box still makes her weepy.  Mona is not as sentimental, but always appreciative, so it was a different sort of reaction this time around.  It was still worth the effort to hand stitch all those little costume figures, and I like the idea of my kids having mini versions of their Halloween costume memories to hold onto (rather than feel they must forever keep the actual costumes).