Our first night in Yellowstone we were mostly just excited to finally be there, and happy to have real toilets and sinks in bathrooms that were a convenient walk from our tent.  We stayed in the Bay Bridge campground toward the middle of the park near the lake. 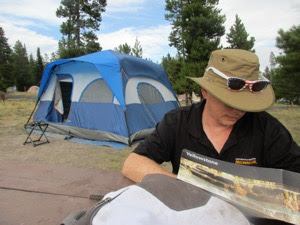 It was really crowded and busy compared to the National Forest site we'd used in Wyoming--like a camping town.  It was really smokey, too, which surprised us since fire danger was listed as high everywhere we'd been, but the campsites all had lined, sunken fire pits, and I guess it was considered safe there.  Everyone seemed to have a fire going but us that night.

After a day in Minnesota we got on the road early and started heading for our campsite in Wyoming, so it was an entire day of crossing all of South Dakota.

This is a good moment to mention again what good travelers my kids are.  They are no problem ever on a long drive.  It's almost spooky how good they are in the car.  They hunker down with their own projects and are happy, and they let me read to them for hours on end.  (This trip we finished reading Birds, Beasts and Relatives, and The Black Stallion.)

This was my kids' first trip west of the Mississippi that they are old enough to remember, and certainly their first time driving across the Great Plains or into the Rockies.  They were amazed at how different the landscape was, how dry and vast.  It was interesting to spend the first part of the day making our way across Minnesota which feels almost tropical by comparison to South Dakota. 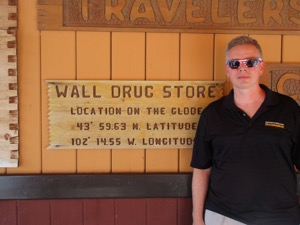 South Dakota also means Wall Drug, which I'd seen the billion signs for on other trips but never stopped in.  Now seemed the time, and I'm glad we went!  It's souvenir heaven, and Quinn was able to stock up on state magnets for his collection, I got a fossil and some salt and pepper shakers, Aden got a necklace and some shot glasses, and Mona found the coolest mug ever.  (I'm glad it survived the trip.  We tried to keep it safe in the box with our Mold-A-Ramas.)  We were able to sit down for an early dinner, admire all the weirdness, and refill our water bottles. 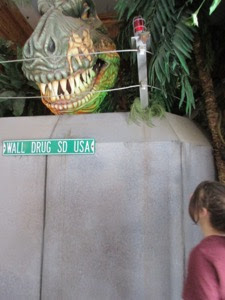 The first stop on our camping vacation was with family in Minnesota, and we were finally able to check the Como Park Zoo in St Paul off our Mold-A-Rama list.  There are not many places left on that list at this point, so our Mold-A-Rama updates are becoming few and far between.  The last big place is San Antonio Zoo, and then there is a car museum north of Chicago, a bar in Chicago, and a record studio in Nashville.  In the meantime the collection on our mantle is up to 146. 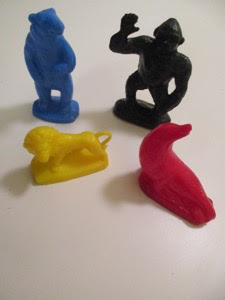 Como Park Zoo has four machines.  We got (yet another) waving gorilla, a (blue!) polar bear, a seal, and a tiny lion.  The lion mold is new for us--we've never seen one that small, and we really like it! 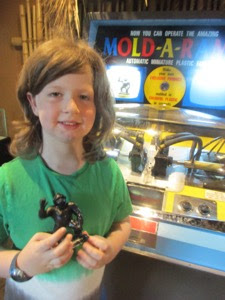 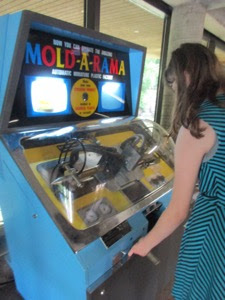 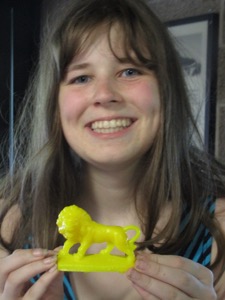 We just got back from a great trip out West that included Devil's Tower, Yellowstone, Jewel Cave, the Badlands...  Lots to say, too many pictures, but before I try to find time to sort it out and share any of it I just wanted to take a moment to appreciate the glories of returning home.

And being clean!  This was our first camping experience with the kids, and we really enjoyed it, but I'm amazed when on a trip like that how quickly you shift from ideas of what is "clean" to what is "clean enough."  I did manage to wash my hair after a week in a sink at a campground and it was wonderful, but nothing compared to getting into the shower when we arrived home in the middle of the night.

Being home is so nice.  Adventures are great, but I love being in my own bed.  In a perfect world we would have Star Trek transporter technology that would allow you to go anywhere for the day and return to your own bed at night.  (Or at least provide you that option when the air mattress in your tent gets flat.)

I already miss being with everyone all the time, though.  I've been swamped with repairs at work, and am back to seeing my kids just at the beginning and end of the day, and it's not anywhere near as good as being able to share every meal and every walk and every drive.  Aden's even off on another adventure with a friend to help tend a lighthouse on Rock Island for a week, so we're down to just two kids.

It's fun having the dog back.  He's REALLY happy we're home and to be with us again.

It's nice to have all my clothes options again instead of the same three shirts.  (Not that my wardrobe is interesting--it's mostly stuff I can afford to get glue on, but still....)

Mostly it's just good to feel grounded.  I'm fascinated by people who are able to function well while having to move all the time.  I know people who aren't in the same place for more than a couple of years and have to uproot, and I don't think I would handle that well.  I need a home base to return to.  I'm glad to be back.

My dad died one year ago today.  A whole year has gone by.

I’m sitting in Yellowstone park.  My family is all in various stages of rest in the tent.  I got up to use the bathroom and then decided to sit by myself for a bit, here, half in/half out of the van.  It’s chilly at the moment, but should warm soon into a comfortable day.

Summer seems to be racing by faster than usual this year.  We're making the most of it, though!  Compared to the trauma of last summer almost anything would be a welcome break this time around, but even with the vacation bar set low I feel we're helping make some great memories for our kids.

To me the essence of summer vacation is being unscheduled, getting outside, having time to do projects purely for fun, a cookout, reading for hours on end, bare feet, watching movies/TV way too late into the night, and a road trip.  By those measures it's been a quintessential summer break, and there's still some left, so life is good.

After our trip to Washington D.C. we had a few days at home together, and then Ian took the kids off to the cottage.  I had to stay behind in Milwaukee to work, but I loved that my kids got to meet up with their cousin in Michigan and just be at the lake.  My mom and my brother were there, too, and Ian emailed me reports of much swimming and fishing and cookie baking.

It's weird living in our house with just the dog.  I kept Chipper with me because I needed the company, but he was so sad.  He kept wandering into the kids' rooms to look forlornly at their empty beds.  After a couple of days he begged to go out the back door (which is odd--he's the only dog I know who hides when you offer to walk him), then begged to go into the garage, then begged to get into the car (another thing he doesn't like), and then he climbed into the backseat and wouldn't leave.  I think he wanted me to drive him to wherever the kids were.  I left the doors open to everything for over an hour in the hopes he'd come back in the house, but eventually I drove him around the neighborhood a bit and when we returned home he bounded inside.  I think he believed some kind of magic would have happened and everyone would be back again on our return, but when he got in the house everything about him just drooped in disappointment. 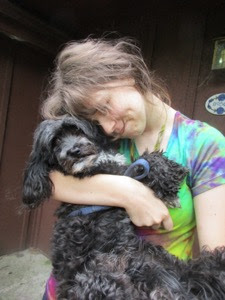 The opposite of the depressed dog was when I got him out of the kennel on the ferry.  I managed to get away to join everyone at the cottage for a weekend, and the only convenient way to do that is to take the high speed ferry across Lake Michigan.  I've never taken the dog on the ferry before, but they have a kennel down with the cars and attendants make sure the dogs get water and treats.  I thought the dog was going to wag us both to death when I got him out of there, and his joy at being reunited with the kids again was something to behold. 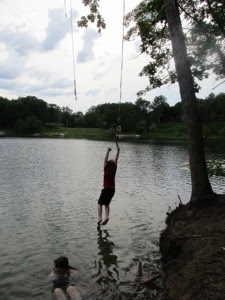 The cottage remains wonderful.  Mona caught many frogs this year.  Quinn caught many fish.  We played badminton on the beach.  The kids swam at The Point, and crossed the island on the other side to use the rope swing there at the other sandy spot they have dubbed The Pointless.  We ate literally pounds of blueberries from a local farm.  There was Monopoly and Boggle and we stayed up very late to watch both Spirited Away and Howl's Moving Castle.  I got to help everyone do tie dying, and Aden was finally successful in making a real spiral pattern on a shirt the way she always wanted.