Last night we attended the opening of the annual Peeps Art Show at the Racine Art Museum. 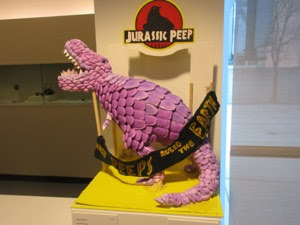 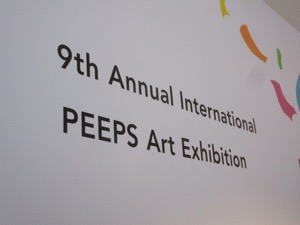 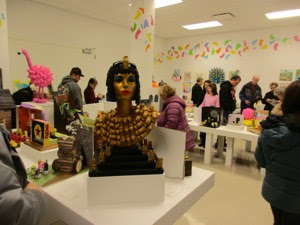 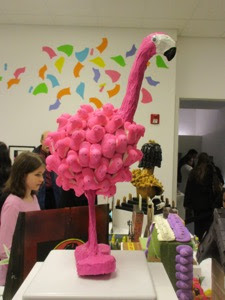 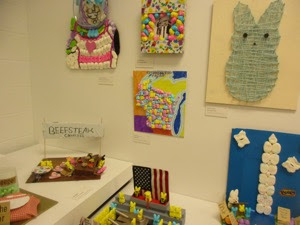 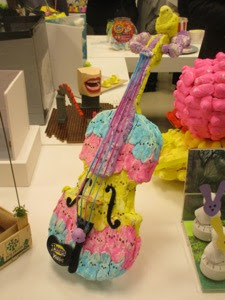 It landed on a night when we had everything scheduled at the same time (2 violin lessons, Latin, orchestra rehearsal, parent meeting for the model UN trip--that was a lot to reschedule or get to late), so we only had time to run through the exhibit and then hit the road again.  (Ask how much we have on the calendar for today or tomorrow--nothing of course.  Because the scheduling gods hate us.)

We left before they announced the awards, but I did read online this morning that Quinn's piece received the Racine Mayor's Award for the under 13 category!  He created "Peepsconsin"--a county map of Wisconsin made of Peeps (that he did freehand, I might add). 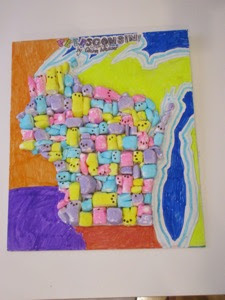 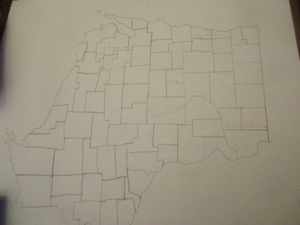 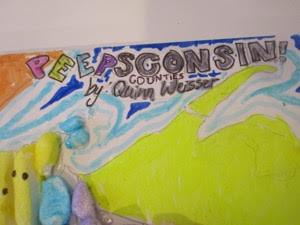 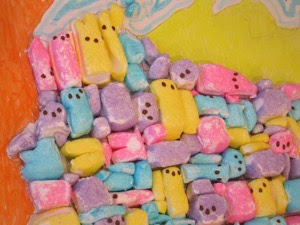 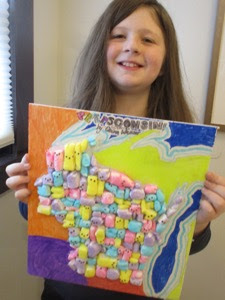 I'm more than a little surprised that Aden's "Jurassic Peep" didn't get at least an honorable mention since it was quite the show stopper and was even featured at the entrance to the exhibit.  (Maybe it will still get the coveted Peeple's Choice Award by show's end.) 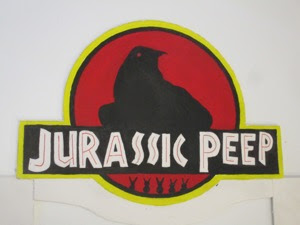 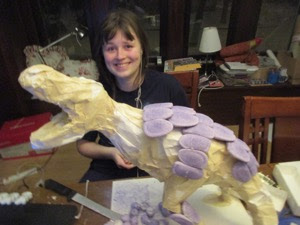 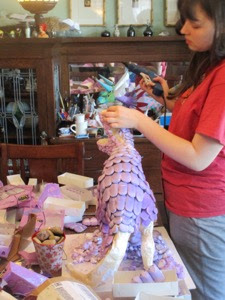 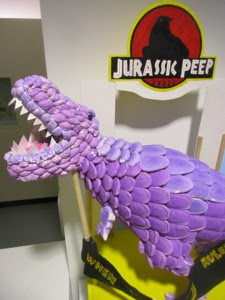 My entry this year was a Peeps Violin.  The Peeps Orchestra I made last year was quite popular in our violin store window after the museum show was over, so I thought it would be fun to make something else that would look good there again.  I had an old destroyed violin that we'd covered in paint and beads about ten years ago that I decided to scrape off and decorate with Peeps. 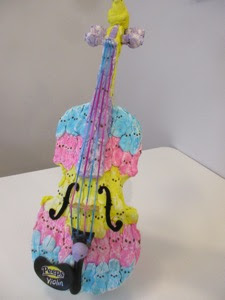 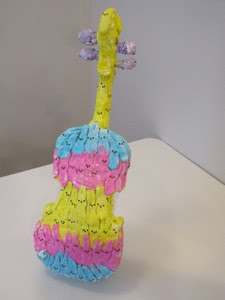 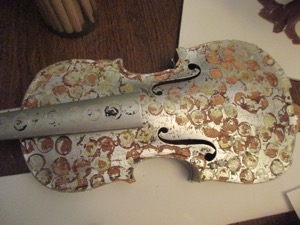 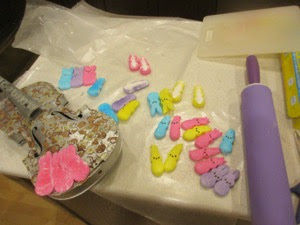 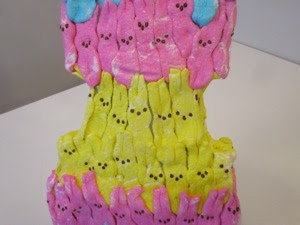 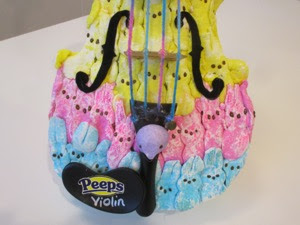 I played with flattening Peeps with a rolling pin, but that didn't go as well as I hoped, and hot glue can do funny things to marshmallows.  For most of the instrument I wound up just cutting off the backs of the Peeps and attaching them with their own natural stickiness.  The f-holes are felt, and the strings are yarn.  (You're not supposed to use any food other than Peeps according to the rules, otherwise some kind of licorice strands would have been tempting.)

I take an odd sort of pride in the fact that even though the whole thing is ridiculous (and no, you can't play it except as maybe a maraca since there are some clackity objects caught inside), the setup in terms of string spacing and bridge placement is better than on a lot of terrible student violins that walk into my store that need my help. 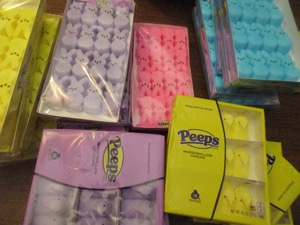 Peeps are not an easy medium to work in.  We've found if you need to cut them up to do anything with, it's best to let them get really stale first.  Fresh Peeps are incredibly squishy.  Even stale Peeps gum up a lot of scissors, but fresh ones are really unwieldy.  We experimented briefly with melting Peeps, which has potential for future projects.  They're just sugar, so they caramelize when heated up enough, and we played with pulling them into long strands.

Also, we discovered the hard way that there is a lot of variation in terms of the color of Peeps depending on where and when you buy them.  So even though we stock up on a lot of Peeps when we're all thinking out our projects, we know now that if you run out of a particular color you can't count on purple Peeps from Target matching the purple Peeps from the grocery store.

This year with Easter being so early we were kind of rushed and only had a few days to put anything together.  Aden's was literally still drying as we drove to drop it off at the museum twenty minutes before the final deadline.  Mona was wrapped up in a different project and didn't get to a Peeps piece this year at all.  But we plan to think ahead in 2019!  The Peeps show is just too much fun not to want to be a part of it.

Go check out the exhibit if you happen to be in the Racine area!  It runs through April 8th.  (Or swing by the violin store after that.  We'll have at least our things in the window for a while.)  Happy Peeps Break!
Posted by Korinthia at 10:50 AM 0 comments

I have a cube collection--Meaning a collection of puzzles centered around Rubik's cubes. 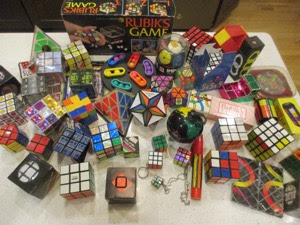 I remember very clearly when Rubik's cubes arrived in the United States in the early 80s.  I wanted one.  It spoke to me in a way few things did.  I liked that it was colorful and compact and could fit nicely in your hands.  I liked that it was something that would take time to figure out.

I also come from a family of collectors, so in my home growing up it was accepted and even encouraged that if you liked something for you to collect and save anything related to it.  So I didn't just have a cube and a solution book, I had all the cubes and all the solution books I could find. 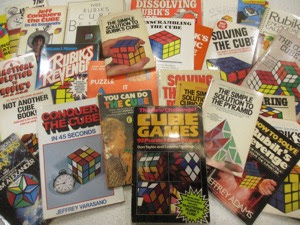