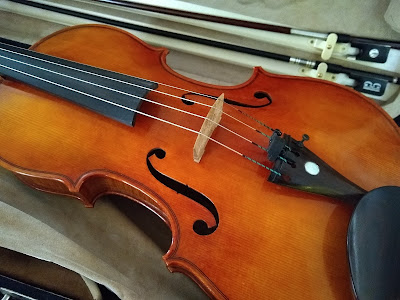 I got to play an orchestra rehearsal last week. I get to do it again this week. The weight of what all of this means to me is something I'm still processing, because sometimes you truly don't know how important something is until it's gone.

For most of my life, my schedule has been organized around rehearsals, concert dates, and making time to practice. I've had to delay family Christmas plans to perform at a midnight mass at the basilica. Options for my kids' spring breaks were impacted by if I had a dress rehearsal that week. In college, orchestra was graded entirely by attendance, and if you missed one of the daily rehearsals, you went down one full letter grade. Since moving to Milwaukee, Tuesday nights have been completely blocked off in my mind as rehearsal nights, and before I can commit to anything else on a Tuesday, I have to check my orchestra schedule.

Then the pandemic hit, and in March of 2020 everything came to a halt. Concerts were canceled. Rehearsals stopped.

Intellectually, I knew that continuing to practice was the correct and healthy choice. I tried at first. I pulled out pieces I knew would be fun and interesting to play. There was lots of time suddenly available to hone my skills in a thoughtful way that normally doesn't happen. But....

Creativity takes energy. In the early days of Covid, all my energy was spent elsewhere. Worry, survival, adaptation, grief... All of it saps energy. And knowing what you should do, doesn't always mean you can.

My viola stayed in the case. I wanted to play. Or more aptly put, I wanted to want to play, but the lack of anyone to play with or for killed my motivation in a way that surprised me.

The important exception was in the middle of summer when I was invited on a couple of occasions to perform along with the Black String Triage Ensemble. They perform protest concerts in response to violence against people of color in our city. The group was organized by a former student of mine, and he asked if I wanted to join them to play black spirituals at various locations to draw attention to racial injustice. One of those locations was in front of the courthouse in Kenosha during the second night of the protest marches there.

Music has meaning, and music has power. Enough power that we had to be forced to stop making music in Kenosha with teargas, apparently. But if I only got to play one concert in 2020, I'm glad it was that one. It was a clear reminder of what matters and how music can help.

Playing music with others, for others, draws on the finest elements of what it is to be human. We create something bigger than ourselves, something more beautiful than we could do alone. Something built from small moments of practice piled one upon the other to eventually create something grand and moving when everything aligns properly. It's a strangely momentous thing to come to take for granted, but when most of your life is built around a schedule of rehearsals, and concert dates--to the point that you consider them ordinary--you can forget.

While orchestras across the country and the world shut down for the year, Festival City Symphony found a way to forge ahead. The spread and death toll of Covid in our state made me too nervous to participate in the first two concerts of the season, and I asked not to be included on the roster. That was painful to do, partially because I deeply missed playing, and partially from guilt that so many other musicians were desperate for the same opportunity I was passing up. But after watching the FCS holiday show online, I was encouraged by the number of safety protocols. I agreed to play the first concert in 2021. I fully intended to back out if when I showed up to the first rehearsal it didn't feel safe.

Everyone was masked, including wind and brass players who had to have special masks with an opening to use when they needed to play, and covers over the ends of their instruments. Everyone had their own stand and was set far apart. The stands were tagged with people's names, and no one was allowed to touch anyone else's stand or music. The ventilation in the room was good enough that the air was completely replaced in it three times an hour. All foot traffic in the building had to move counterclockwise to help people maintain distance. We had to present a signed form upon arrival stating we did not have Covid symptoms or had been knowingly exposed recently. They took our temperature before we could proceed into the building. The length of the rehearsal was kept short, and there was no break when people would normally mingle. The concert itself will have no intermission and will finish in under an hour. There will be a cap of 150 audience members, masked, and in assigned seats set apart from other parties, with no seating in the first couple of rows closest to the orchestra. My family will watch with the virtual option.

So as much as you can mitigate risk for an orchestra to play together, I think they've managed it. I'm still nervous, but do not feel unsafe. And I am incredibly grateful to have a reason to open my viola case again.

However, the physical task of playing after so much time caught me off guard. It's work. Actual physical work that you need to train muscles to do. I don't think most people realize that. Simply holding up your arms for hours takes strength. In fact, when I was in college, there were guys in my dorm who thought it was impressive that I could hold my own in an arm wrestling match if I used my left arm. I haven't used those particular muscles in a while, and when I started practicing again I was really sore.

It's also weirdly cumbersome to play with a mask on. I wouldn't have guessed that, but it's somehow harder to see the way you need to, glancing past your instrument to the music and up at the conductor regularly. I'm not sure exactly what about the mask is in the way, it just is, so that will take getting used to as well.

I've been working my way back up to playing for longer stretches, and with a mask on sometimes, so that I'll be prepared for the concert. Plus I had to follow all the advice I give everyone else who comes through my shop, and gave my own viola a checkup and actually rehaired my bow and changed my strings. It made a big difference.

It will be a good show! If you want to watch it, the information is here. We'll be playing Holst's Brook Green Suite, Schubert's Fifth Symphony, and Frank Almond will be the soloist for The Lark Ascending by Vaughan Williams.

It's strange playing in a mask. It's odd not to have a stand partner. But the camaraderie is still there, even at a distance. And making music is magic. At one point last week in my first real rehearsal in almost a year, I became choked up with how beautiful and amazing it all was for people to work together and bring the air to life with history and sound and meaning. I've missed it. More than I realized.

Posted by Korinthia at 5:48 PM 3 comments