Halloween was on Halloween here in Milwaukee!  It's a Christmas miracle! 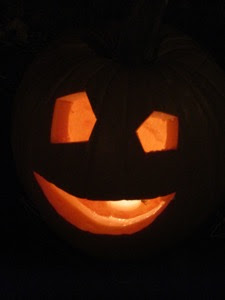 Unfortunately for the city-wide trick-or-treaters it rained here all day, but for our neighborhood's nighttime trick-or-treat it was merely cold and a bit damp.  I was surprised at just how many people came to our door this year considering how unpleasant it was out, but we went through many hundreds of pieces of candy like we usually do.  Lots of Ninja Turtles this year, along with many Batmen, Supermen, and Star Wars characters (the best of which was a dad dressed as Luke Skywalker with a baby in a Yoda hat strapped to his back).  My favorites were a dad dressed as a cockroach, a little boy in a homemade tiger shark outfit, and a small child in a beautiful macaw costume.  Oh, and a little girl in a homemade robot costume who said "Beep Boop!" for thank you 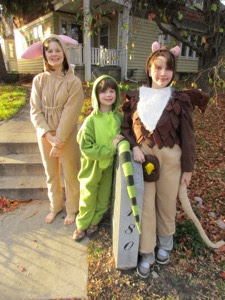 I got pictures of the kids in their costumes before they went to the Halloween dance at their school the day before while the weather was nice.  I love how much they love to dress up! 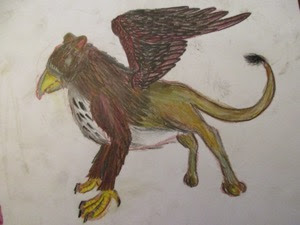 I finished copying over all of my Babble posts into this blog.  (Well, everything except the slideshows--those you'll have to read over there if you want to track them down.)  I was tired of all that writing being buried and not searchable, and it's frustrating that most of the pictures were lost or that some of the posts were jumbled into other people's work.  The dates are gone, and the comments have been wiped out, which is a shame because there were some really interesting and entertaining discussions there.  It's disconcerting to have a heartfelt record of a stretch of your life mishandled in that way.  I feel better having copies of it all here.

I did a lot of writing at Babble!  More than I realized.  As of this date I am still about half a dozen posts shy on this blog of the total amount of posts I did for Holding Down the Fort, so I've doubled my archive.

It's been a tedious process doing that much cutting and pasting, and finding old photos again (any posts where the photos were merely nice but not necessary I just left photo-less), but it feels good to finally have all of it where people can read it.  There are many times I haven't bothered to write about certain topics here because I felt I'd already said what I wanted to say in an earlier post on Babble, but if nobody can find it it's the blogging equivalent of "If a tree falls in the forest..."

It's put my head in a strange place, reliving all that time during deployment again.  The same way you eventually forget the true toll of sleepless nights with a new baby, the deployment stress has faded to something I recall but don't usually feel.  It's good to remember and then appreciate where we are now.  It's amazing to go back to the earliest posts and see just how young my kids were, and see in what ways they've changed and in what ways they never do.

So here are some links to Babble posts (as transferred to this archive) I particularly like that maybe you haven't seen, or that may still be of interest.  I have yet to address any of links in them (I suspect most will take you to a picture of Micky Mouse saying "oops") and if there are any weird mistakes I missed while up late doing my copy and paste thing please feel free to let me know.  (Think of this as a rainy day list for the times I am lax about posting often enough!  Just come here and pick an old post or two.)

My original two Babble essays before I started my blog were about Ian being gone, and about adjusting to Ian coming home again.

I think my funniest post remains The Ultimate Game.  But Styrofoam, how I hate thee, let me count the ways....  still makes me laugh, too.  The world's most hilarious/awful Christmas card was made in Mommy's Sweatshop.

Posts that people contacted me about years later still wanting to reference them were:

Email ThisBlogThis!Share to TwitterShare to FacebookShare to Pinterest
Labels: Babble, Holding Down the Fort, selected posts 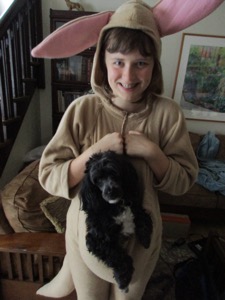 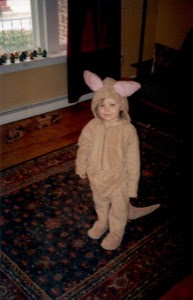 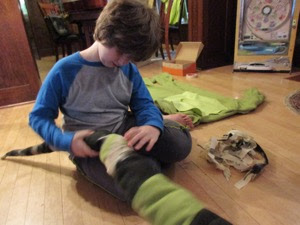 Oh, and also these things happened...

So, the part of this blog that is a record for myself of things my family does kind of got understandably sideswiped this summer (and into the start of fall).  The death of my father and what that means going forward is still something I am processing, but regardless, our lives have continued on in busy and interesting fashion, and I need to jot some of it down before I forget it ever happened.

This is essentially "How I Spent My Summer Vacation" without the sad parts and with many photos.  Here we go:

I did post about our trip to the cottage already.  Ian and the kids (including my niece) got to return there for a week in August as well.  I love that the cottage is a summer tradition for our family. 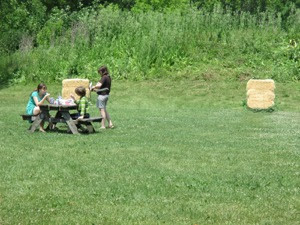 Early in the summer I finally got the appropriate archery equipment for the girls to share.  There are several public ranges in the park system in Milwaukee, and sometimes we'll picnic there when we go out to shoot.

Quinn's still too small to handle the bow yet, so he acts as a human quiver and also retrieves arrows.  The girls are improving quickly and we've been having a lot of fun.  Next summer I plan to get a third bow so they don't have to take turns. 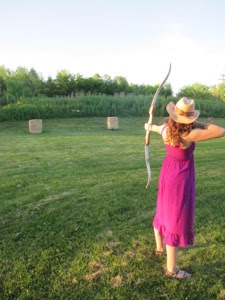 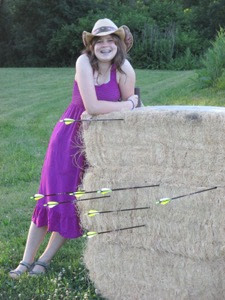 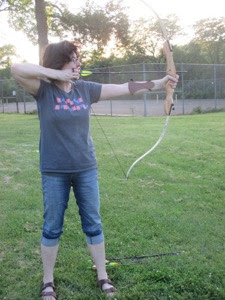 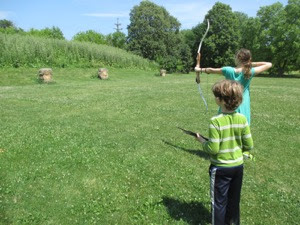 Summer means trips to Leon's Frozen Custard.  (Or, at least, more seasonally appropriate trips to Leon's.)  Aden has discovered the joy of the banana split.

The Good and the Bad

Aden invited me to go with her class on a field trip to a movie downtown.  As part of the Milwaukee Film Festival there was a showing of Landfillharmonic, a documentary about children in Paraguay who live in a dump and play music on orchestral instruments assembled from garbage.  Aden knew I'd be interested, and when her teacher said there were a couple of tickets left for any adults who wanted to come along she was excited to ask me.  It was short notice (she told me the night before), but I was caught up on my work and figured it would be fine for Ian to cover for me in the morning.  I told Aden I could go.  She was delighted.

Aden is 13.  13 is hard.  We are struggling a bit with her lately, because the parenting road is not particularly clear anymore.  When children are younger there are relatively fewer choices about many things.  I'm not saying it's easy, by any means, because it's not, but the variables are different.

With toddlers, for instance, you know all of their friends.  You usually share most of your child's environment.  You know where they are, what they are eating, and what they are watching.  The scope of their potential worries tends to be narrow.

By eighth grade, for many, that all goes away.  Most days my daughter spends more waking hours outside of our house than in it.  I do not know all of her friends.  I have only a vague idea of what her days look like, I no longer have control over what she eats or watches, and her concerns are complicated.