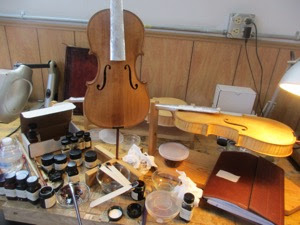 I went to my third varnish workshop in April and this was the best one yet.  I went for the first time in 2013 when it was in Boston (during which the marathon bombing occurred, so that was memorable even without all the cool new information about turpentine), and again last year when the workshop moved to Chicago. 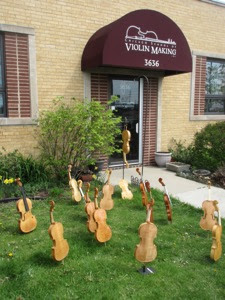 This year it was in Chicago for the second time, using the facilities of the Chicago School of Violin Making while the regular students were away on break.  (It was a long commute from Milwaukee, but it was nice to sleep in my own bed at night.)

I think the most natural question of the uninitiated at this point would be, "What is there still to learn by going to this workshop for a third time?"  And someone who has never varnished a violin or doesn't know anything about it probably assumes there can't be that many ways to do it, so it would be hard to imagine a whole week of it yet again.

But the better you become at anything the more capable you are of learning new things.  It's great to feel you are improving your skill set while also adding to it. 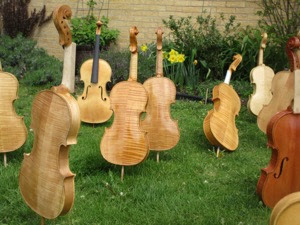 The first varnish workshop was a revelation about how to see violin varnish, how to read the wood as you progress, to understand ground in more depth, and how to use materials very different from what I was initially trained with in school.

By the second workshop I was able to move past more general ideas and focus on finer details.  I learned a huge amount about preparing an instrument while it was still in the white in order to influence the look of the varnish later.  I was led by the hand through explorations in color in ways I never would have conceived of on my own.

I've always been irritated with people who are quick to dismiss Mother's Day as a greeting card holiday.  Holidays are what you choose to make them.  The commercialization of certain holidays can indeed get out of hand to the point where the real sentiments get lost, but that's the fault of capitalism and the juvenile insistence of the average person in this country that everything be fun or dramatic rather than meaningful.

Major Christian holidays in this country get a lot of attention, and I know members of minority faiths who resent how little the mainstream knows about other holidays when they come around, but I've often felt they should be a bit grateful that the relative obscurity shields them from some of the nonsense, and they don't see important traditions reduced to another excuse to buy unnecessary things.  My kids were surprised to learn Easter was a religious holiday at all, because they've only known it as egg hunts and candy.  For us that works, again, because we can make holidays what we like, and for some of them that means making them silly.

But even secular holidays aren't immune from further secularization.  Mother's Day in this country was eventually denounced by its creator who found its reduction from something meaningful to something used as a marketing ploy to be deplorable.  However, we can pick what we like and reject the rest, just as we can on any other day.  The tricky part is navigating the larger context and being prepared for the various meanings any holiday has for others.  We can't assume it's the same for everyone.

Quinn (and consequently I) have been taking Latin lessons once a week at the local university for a couple of years now.  I love having an activity that I get to do with just him where we can chat in the car and walk together to the library and maybe share a snack if there's time.  Plus the Latin is fun, too.  All of that I sort of pictured ahead of time when we signed up.

What I hadn't pictured was our regular inspection of the flags.

We fly an inordinate number of flags in our country.  Quinn loves flags (or, at least, he loves anything related to geography that can be put into an orderly list) and can currently identify all 197 country flags we found on an online quiz.  He pays attention to them in a way I normally don't.  On our short commute to the university we pass many flags flying outside of schools and government buildings and people's homes.

It seems more often than not anymore, those flags are at half-staff.