I wrote this essay as I was preparing to launch my first novel.  (Buy my book!)  It aired on our local public radio station the other day, so if you'd like to hear it in my voice, here's the link:

ART OF CREATION  by Korinthia Klein

As far back as I can remember, I always thought it would be exciting to write a book.  I toyed with the idea on and off for years.  It probably would have made more sense to attempt to write fiction for the first time before becoming immersed in child rearing, but the impulse to finally write did not strike me until I was well down that road.

Is there a mother who loves her children who doesn’t live with the fear of losing them?  Especially in the early years the idea of something unspeakable happening to any of my babies often made it hard for me to sleep.  It was too terrible to contemplate but somehow impossible not to.  I wondered about the toll such a loss would take on me, if I would be strong enough to bear it.  But becoming preoccupied with such thoughts felt wrong.  I needed a distraction.

I know all the logical arguments about why there is no justification for summer vacation anymore.  My children aren't needed out in the farm fields and the break in their formal education takes a toll by fall.  I suppose that all makes sense.  But I'm not one who obsesses over my children's academic lives, and our own work schedule is not jeopardized by the kids being home, so I can afford to get behind the concept of a real summer break.

I believe in the value of giant swaths of free time.  Creativity doesn't readily conform to a schedule.  There are projects I don't even start if I know I can't have several hours to alternately concentrate and let my mind drift.

And I believe one of the greatest gifts of childhood, if you are lucky enough to get it, is the chance to be free of certain responsibilities and come up with things to do on your own.  I like being able to grant that to my kids on a grand scale in the summer.  With a few exceptions, their time in summer is their own.

We don't have bedtimes during summer vacation.  The kids sleep in as long as they want to.  There are no rules about the TV.  The only rule about the computer at the moment is they have to use it in the dining room just so they don't get holed up in some dark corner of their room on a beautiful day.  If they use their own money they can flag down the ice cream cart whenever it comes by.  They can play outside until the sun goes down.  Friends from the neighborhood are welcome.  Quinn can't bike outside alone if a grownup isn't home, but otherwise they can bike wherever.  We keep track of them in a general sort of way, but our house with the trampoline the giant box of legos and the big supply of sidewalk chalk tends to be where lots of kids want to congregate, so we don't have to look far.

Quinn still has a couple of piano lessons to prepare for over the summer, and the girls still have violin, but that's about it.  We do a family word of the day for spelling practice, and as school gets closer we'll buckle down and review math again.  When their rooms get too messy we stand over them and make them clear a reasonable path.  But for the most part not much is expected of them.  They can decide what to do.

And what have they done with their time so far?

The World of Work

About a week before school let out, Aden had one last field trip.  She got to participate in a large scale Junior Achievement "Work" simulation.  The kids were taught how to manage money by using a checkbook and debit card and do some form of job.  Which meant a week or so before the trip everyone had to apply for the different jobs available.

Aden wanted to work in one of the restaurants.  Even though she wouldn't be cooking for real, she likes the idea of making things for people and organizing that kind of activity.  She held out hope for the job she wanted up until the day before the field trip when the assignments were given.  And then Aden found out she was going to be a bank teller.

She was really depressed about it.

I started off by telling her that the good part about her job was that she would get to see everyone.  Everybody in every job would have to visit the bank.  And that depending on the people she was with and details of the job she didn't know yet, it would probably be a lot more fun than she expected.

And then I told her something I'd never considered talking to my children about before, even though it seems obvious: People seldom end up in the jobs they want.

Tempo Was Too Quick 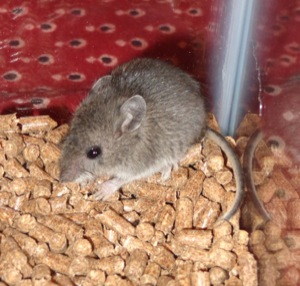 Tempo is/was the name of our mouse.

"Tempo" is short for "Temporary," as in probably not a permanent pet, but since we caught him in a live trap at the violin store it also seemed like an appropriately musical name.

The kids loved Tempo and we got him a tank and a wheel.  Mona made him a little duct tape house.

He's been happy in his tank since late April, running in his wheel all night long, snacking on almonds and seeds.  Then the kids decided we really should clean his tank.  Like an idiot I tried to dump Tempo from his little house into the live trap and SPROING!  Out popped Tempo onto the window seat, down to the floor, and into a grate.  Just like Ian told the kids would happen if they tried to do such a thing. 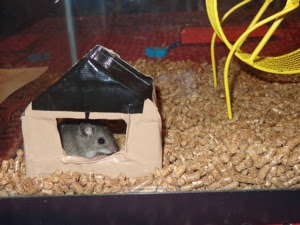 So now the mouse is on the loose and the live trap is set with almonds again.  His tank awaits, but I'm not hopeful.  Our house is much bigger than the violin store and his options for finding food on his own are much greater.  Most days he was actually my favorite pet because the fish is boring and the dog is high maintenance, and there is something endlessly entertaining for all involved when the mouse runs in his wheel.  (How is it a wild mouse knows what to do with the wheel?)

Oh well.  At least Tempo is now probably Allegro in both senses of the term.

Posted by Korinthia at 6:08 PM 4 comments

Buy my book!  How is that for clever self-promotion?

Actually, today seems like a good day to remind people who say they'd like to read my book to go find a copy because the electronic version has become widely available.

The place where you can purchase Almost There in print where I receive the most royalties is at the CreateSpace estore.

My book can also be found in print at Amazon, and is available there in Kindle form as well.

Almost There is on Nook at Barnes and Noble, as well as other sites I'm less familiar with like Scribd.

I have received some very kind feedback from readers so far, not all of whom are my mom.  If you liked my book would you consider writing a review on Amazon?  There could be pie in it for you.  Unless that violates some sort of code of ethics in which case I should probably disclose that you'd get pie anyway if you come over.

If you are interested reading Almost There for a book club, I'd be happy to participate in discussions and answer questions via Skype or email.  (Or in real live person form if it's convenient!)

Buy my book!  (Okay, pledge break done, back to working on real posts....) 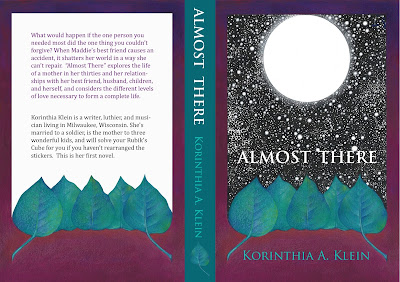 Quinn learned how to ride a bike last week.  He did it with very little help and no training wheels. 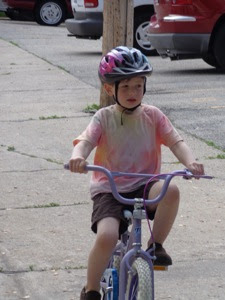 He's six, and when I asked him recently on a nice day if he'd like to learn to ride a bike this summer he shrugged and said, "Okay."  He's been reluctant to try in the past, but he's great on a scooter so I knew he'd have the balance for it.

The things Quinn is good at he is very good at.  He reads at at least a sixth grade level, his geography is better than that of most adults I know (myself included some days), he's gotten off to a strong start on piano....

Well, I've let almost two weeks get away from me without writing about my brother's wedding, so I'd better record something now or I will forget more of it than I care to.

My brother, Barrett, is amazing.  He's an entomologist who teaches at the University of Wisconsin LaCrosse.  He does scientific illustration and sleep research on bees, and is an all around brilliant, compassionate, and funny guy.  I'm constantly floored by his knowledge and talent, and his enthusiasm for life and learning is inspiring.  I adore Barrett and I'm honored to be able to say I'm his sister.

My new sister-in-law, Dosha, is gentle, kind, and creative.  When she heard the news a few years back that Ian was being deployed to Iraq again, her first response was that she would find a week or two to come out to Milwaukee and help me.  And she did.  Living through a deployment with small children teaches you quickly who really means it when they say they are there for you, and it's not always the people you expect.  Those ten days where Dosha stayed with us and made it possible for me to breathe easier for a little while will always mean the world to me.  I love her.

The two of them make a lovely couple.  It's the kind of pairing that seems so natural that it's hard to imagine them not together.  Barrett's energy and extroversion is nicely balanced with Dosha's calm and patient amusement.  Just knowing they have each other makes me happy and feel better about the world.

So, of course, they had a lovely wedding.  It was unique and moving and fun, just like their relationship. 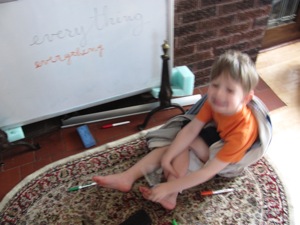 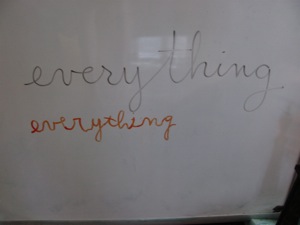