(A bit overdue at this point, and with fewer details than I originally wrote, but at least I got something down while I remember anything.)

We had a great trip to New York for spring break! 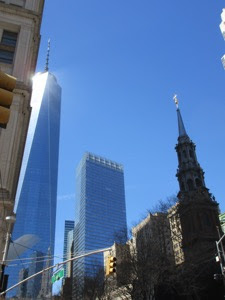 We didn't stop in Ohio this time, so it was a long drive in one shot from Wisconsin.  Thankfully my kids all continue to be excellent travelers, making 15 hours in the car together possible--even pleasant.

In any case, here is a summary (with lots of pictures) so I won't forget:

My kids' spring break didn't line up with my niece's this year.  She only had off the Friday before Easter, and we had from then up through the beginning of April.  So we decided in order to get the most time for cousins together that we would pull our kids out of school a day early and drive to New York all that Thursday.

The car ride was (blissfully) uneventful.  We finished reading the book Wildwood (which we enjoyed) and started Birds, Beasts, and Relatives, which is part of the My Family and Other Animals series.  I really like reading to my kids in the car.  (It's amazing how much faster it makes the time seem to go.)

We arrived around midnight in New York City where my sister-in-law had an air mattress already set up for the girls and the trundle bed pulled out for Quinn.  My brother was out of the country for a business trip, so it was "just" the seven of us (plus Pepper the dog) for the first few days.  I am amazed every time we visit that they are able to find space for us in that apartment, but they do, and we're grateful.

The Knee Jerk NO

Before I begin, let me say that I started writing my NYC post again, and Blogger randomly lost about two hours of writing.  Not the whole post this time, just back a day's writing, but what is going on?  I am beyond frustrated.  I don't know how many times I can try to recreate that work and not go insane so I may have to scrap it.

Some people don't understand why I don't just write blog posts on my desktop and then copy and paste when I'm ready to post, but there's something irritating about that that is hard to describe to someone who doesn't blog.  It's not like regular writing.  It's more immediate and I want to arrange something as I'm thinking about it in the format where it will live.  I've started copying and pasting from Blogger to email as a backup in addition to hitting the ineffective "save," but I still don't understand why now I have to do that.

The other day when we were all in the car together, Ian was telling a story about how in Iraq there was a point where he and another officer were in charge of a group, and the other guy was the picture of a big tough military guy, and Ian by comparison was not imposing.  But Ian was the one everyone considered the hard ass really in charge because he was the one who would say, "No."

I laughed and said, "Which one of you was the parent?"

There is a lot of knee jerk "No" when you are a parent.  More than there should be, and I make a conscious effort to stop and reassess before I simply say "No."  Many times when my kids make a request and my first instinct is "No" and I take a moment to really think about it, I wind up saying "Yes" instead.  Because many times the request is harmless.

I think the automatic "No" comes from exhaustion.  There is so much responsibility and so much to get done in so little time that deviating from whatever plan is in action feels like one thing too many.  And so much of parenting, particularly of small children, has such a meandering pointless feel about it that it can get frustrating.  Adults usually like to feel they are accomplishing something.

This is just a quick, anguished cry in the middle of the night to say that I worked for DAYS on a blog post about our trip to New York for Easter and right when I finished it tonight my computer blinked out and rebooted for no apparent reason and the whole post is GONE.  Gone gone gone.  I don't understand why Blogger only has the intro I started a week ago and not anything I hit "save" on since.  None of the photos or the links.  Nothing.

I have so little time as it is, and to have all that work disappear making that writing effort a waste....   I don't know if I have the energy to write it all again.