I love games, and my most reliable partner for games in our house is my son, Quinn. He's 13, which means he's most often inclined to be off in some corner of the house doing his own thing, but almost anytime I ask when I'm home from work, he'll agree to a game.

If we can convince anyone else to join us, we'll usually play Settlers of Catan, Sorry, Uno, Spite and Malice, or Code Names. If it's just the two of us? It cycles among Backgammon, Rummy, Abalone, Boggle, and Cribbage. During isolation, it's been pretty much all just Boggle or Cribbage.

But our Cribbage board was annoying. It's the type where you have to move your pegs around your track twice to finish, and on evenings when we're fading a little, we can honestly forget which round we're on and suddenly have no idea who is actually winning. We decided it would be better to have a board with one, long winding track from start to finish.

So why not make our own board? Looked easy enough, and I can make things.

Of course it didn't go quite as planned, but I like the final result anyway. Behold our new Cribbage board! 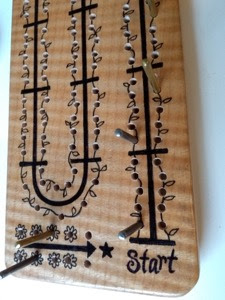 Now let me explain what a goofy adventure this turned out to be.

At least as a violin maker I knew I could find a nice piece of wood lying around to work with. I happen to have a small pile of odds and ends that were given to me by a nice wood supplier in Washington state when I was out West for a VSA convention many years ago. Wood that was too thin or didn't have its book-matched partner, etc. I dug around in that pile and found a piece of maple that was never going to be a violin, and made it into a shape and thickness I could use.

For pegs in the board we went to American Science and Surplus and found matching rods of brass, and "music wire" (whatever that might be--didn't come up in music school), and I sawed them into little pieces and polished the ends smooth. (Quinn has barely been out of the house since the pandemic shut everything down back in March. It was strange to wander around one of our favorite stores while wearing masks, but it was also nice to get out and do something purely fun for a change.)

Once I knew the thickness of the pegs we'd be playing with, we decided how we wanted the layout of the track to go. We penciled in spots for drilling, and I hit my drill press. This is where my general lack of patience decided to teach me a lesson. There are 120 holes per player on the board. (Plus a few extra for a tally of how many games each person has won.) The smart thing would have been to poke a hole to mark each spot before trying to drill them, but ugh, that seemed like a lot to do. I thought, eh, how hard could drilling holes in straight lines be?

Ha! After the second hole I just started laughing. The flame in the wood was guiding my drill bit into odd places, and it was beyond my control. After about half a dozen holes I realized I was either going to have to start completely over, or just deal with the bizarre mess I was creating. I decided to plunge ahead with my Cribbage board that with each new hole was looking more and more like the drill press version of a failed test for drunks at a traffic checkpoint. I showed it to Ian and Aden when I came up from the basement, and they both asked what happened. I told them at least no one would ever ask where we bought our new Cribbage board from. 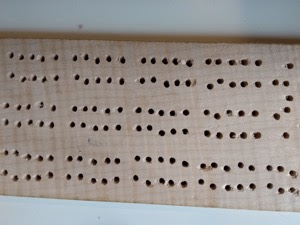 So I pondered the wonky holes for a day and decided that an artistic solution was the way to go. I got out a nice pen and went to work between projects on my bench one day. I created the vine design, and now it looks maybe like it's all on purpose. Quinn looked pleased anyway, when I showed him the finished board. That's all that really matters to me. 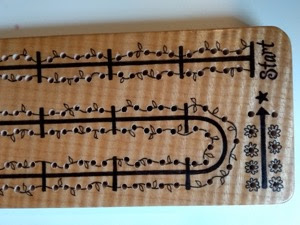 I used an old box from a rosin I bought at a violin convention in 2004 (from which the rosin has long ago been used up) to store the scoring pegs. Maybe someday I'll make a case to keep the whole thing together along with the necessary deck of cards, but not now. Not exactly the kind of project I was hoping to complete during all of our unexpected free time, but still fun. It always feels good to make something. Strangely, of late, I feel busier than ever. Which I don't understand since so many activities were wiped from our calendar. But somehow I'm having even more trouble making time for the things I most want to do.

In any case, one day when we look back on our pandemic days, we'll have a pretty cribbage board made from violin maple to show for it. I love game time with Quinn. That will be part of this whole mess I will be able to remember with nothing but fondness. 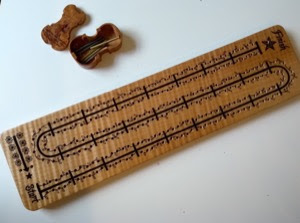 Posted by Korinthia at 1:44 PM 0 comments