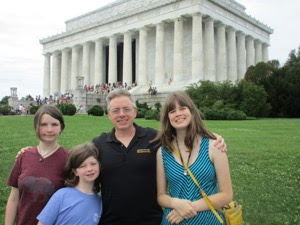 We got to spend 4th of July weekend in Washington D.C. this year.  It's a place we've wanted to take the kids for a long time, but thought we should wait until they were all old enough to remember it later.  (My kids have been to Oregon and Texas and parts of New York that they have no memories of anymore because they were simply too little to retain enough of it.  We'll have to arrange a do over for much of that.)  We were there specifically for a cousin's wedding, but took the opportunity to have fun in a new place together and explore a bit.

Washington D.C. is a marvelous city.  It certainly helps as part of a family vacation that so many of the museums and monuments are free to the public.  We even managed to find free parking for every visit to the Mall.  The weather mostly cooperated; it never got too hot, and what rain we had didn't interfere with any plans.  On top of it all we got to spend time with both family and friends and the whole trip was great.

To Kill a Mockingbird

I started it when Trayvon Martin was murdered, and then again when there was no conviction in his case.

I started it when Dontre Hamilton died right here in Milwaukee, shot 14 times by the ice rink across the street from where my orchestra plays free concerts for kids.

I started it when Eric Garner was choked to death on video, saying he couldn't breathe, and everyone watched, and no one did anything.

I was too numb to start it when John Crawford was killed in a Walmart in Ohio for holding a BB gun for sale in the store.

But I was moved to start it again when Michael Brown was killed and left in the street for hours and hours, and again when Ferguson erupted in response.

I tried several times to write this post after Tamir Rice was shot while playing alone in a park in Cleveland.  And again when no charges were brought against anyone.

I didn't know what to say about Tony Robinson being killed in Madison.

Or about Walter Scott, who was shot in the back while running away, no immediate threat to anyone, his death caught on a video that played over and over in a way that began to feel frighteningly casual.

I started this post again for Freddie Gray.  I'm still trying to wrap my mind around the idea that his death was ruled a homicide, but somehow nobody is responsible.

When Sandra Bland died in police custody I didn't even know how to begin explaining that to my kids.  I couldn't find words to explain it to myself, let alone sort the horror of it out into a blog post.

This week the country watched the senseless deaths of Alton Sterling and Philando Castile.  It's too much.

Then police officers were targeted in apparent retaliation.  From what I understand those attacks were particularly undeserved as the Dallas Police Department has taken a progressive approach to address problems before they arise, and were there to protect a peaceful protest, not antagonize their citizens.  This violence is not only tragic but a setback for the cause that fueled it, because more murder of innocents is not the solution, it just adds to the unnecessary pain and gives people already in denial an excuse to remain unmoved.

I'm afraid to check social media as I write at this moment for fear I am already behind with current events and more tragedy is unfolding that will push the latest chapter in this crisis by the wayside.

It's probably obvious why I kept starting this post.  But why did I never finish it before now?