This past weekend we ran the Amazing Milwaukee Race #6.  There have also been three of the bike version, so of the nine races I've been involved in, five were as a participant and one as an element of the race.  They've all been, well, amazing, and sadly the remarkable man who runs them is moving this summer, so this was the last of them.  Adam Baus is the kind of person who is able to organize productions and people in ways I can barely fathom.  I'm awed by his ingenuity and his ability to not only inspire but follow through.  He makes great things happen.  It's a real loss to our community that he is leaving and he will be missed.

But what a way to go out!  I loved this race.  I'll be feeling it in my legs for a while but it was worth it. 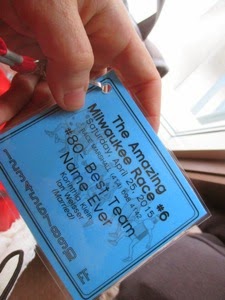 Ian and I signed up pretty late (because there was the possibility of his having to do an Army activity, but that wound up not being a conflict) so we were team #80.  Team name: Best Team Name Ever.


The starting point (and finish line) was a restaurant and bar on the Downtown Riverwalk called Ale Asylum Riverhouse.  It would be nice to eat there when it's warm, which late April in Milwaukee is not.  Only in the low 40s and windy, but at least it didn't rain on us this time.  (And I didn't have to do any portion of this race in just my underwear, so that was a plus.)

I wouldn't want to keep anyone in suspense about my biopsy results.  Got the call this morning that it was just a benign cyst, so all is well.  Thanks to everyone who reached out to me on this blog and through email.  Your kind thoughts have been much appreciated.

Since my last blog post I've traveled to Ohio and New York, played two concerts, and been featured on local TV, so lots to write about when I finally find a minute.  In the meantime, for those who are curious, I can describe the biopsy a little.

No Way to Make Some Things Pleasant

I'm going to start off by saying I'm fine.  I'M FINE.  This is not a plea for sympathy.  In fact, sort of the opposite, as odd as that seems, because I'm finding this easier to write about than talk about with anyone.  I don't want to talk about it, but I still have thoughts I need to sort through, and that's really what this blog is for.

This week I went for a followup mammogram.  The one I got just after my birthday was with a new "3-D" machine and it apparently sees more than the old machines, so the new pictures essentially became the new baseline, and they needed to look at some things more closely.  Most of those things turned out to be cysts that they are not worried about.  One small nodule requires a biopsy to be sure it's benign.