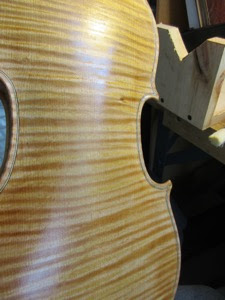 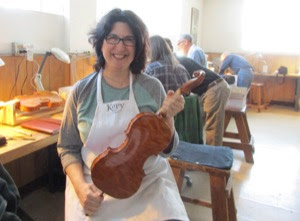 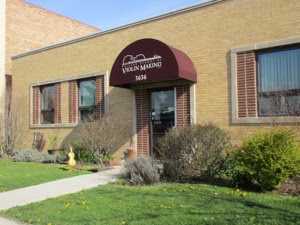 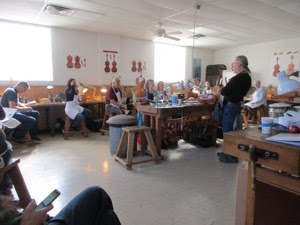 For people who may not understand the complexity of violin varnish, you should know it's generally considered half the process of building a violin.  I get asked once in a while why we even need varnish on a violin, and there are several reasons, not the least of which is for protection.  Violins are objects that are handled regularly, and the amount of damage the oil and dirt from our hands can cause is extensive.  Varnish helps protect the wood from injury.  Varnish on a violin has a great impact on its sound.  Violins set up "in the white" (meaning without varnish yet) invariably sound more "screamy" to me, less settled, slightly hollow and less focused.

All of these are important elements of varnishing a violin, but I would say the goals of the workshop were centered on beauty.  Varnishing a violin simply makes it beautiful, and there is a huge range of ways to pursue that goal.  Application technique is everything, along with developing your eye and learning to understand the materials.  It takes a lot of practice, and a lot like playing a violin, even as we improve we will never get as good as we'd like to be. 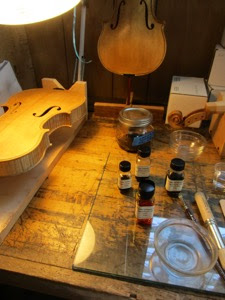 For the workshop we were supposed to bring two instruments: One in the white, and one with the ground completed already.  (More on what "ground" is in a moment.)  I was ambitious and wound up bringing three violins.  Two of them I purchased in the white from a supplier Joe recommended (which is what I did last time as well), and one of them was the violin I've been working on on commission.  The player for that instrument liked the look in photos of the varnish on Marilyn's most recent instruments, so I wasn't going to pass up the opportunity to have her advise me in person on how to reach that color.

Ground.  Ground is everything you put into the wood that becomes a part of it, and varnish is everything you put on top of that.  Ground involves the underlying color you are working with, and a certain amount of sealing and preparing the wood for varnish.  The mantra of the workshop boiled down to: "The illuminating power of ground is stronger than the tinting power of varnish."  What that means is as much as we are distracted by color on the surface of an instrument, much of its impact is due to how well light is reflecting back to our eye from the wood beneath it.  Really beautiful violins aren't just a nice color; they glow.  (There are other philosophies, by the way.  We were focused on Cremonese varnish.  There are other regions of Italy and elsewhere where more pigmented varnishes were used which have a flatter, darker look, and those are beautiful too.  Just not what most people go for.)

Here is my violin in the white: 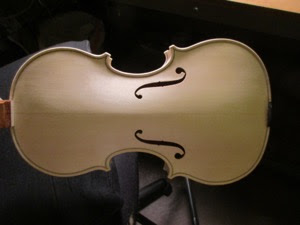 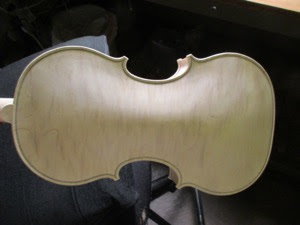 And here is my violin after I completed the ground:
(This color is now a permanent part of the violin.  You can strip varnish, but you can't strip ground.) 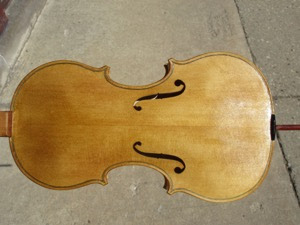 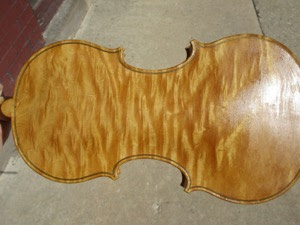 (If anyone had any doubts that varnishing makes the instruments more beautiful, look at that back!  I knew that piece of wood would be spectacular once I finally got some varnish on it.)

If you have the time and the weather for it, tanning an instrument in the sun creates an excellent ground color.  There are methods of sealing instruments using egg whites or thinned varnish or shellac.  People artificially age wood by using ammonia or other chemical solutions, or color it with everything from tea to watercolors to wood stains.  They all produce different results.  I used the Balsam Ground system that Joe developed because I think it's healthier for the wood in the long run and I simply like the look.  But one of the things I appreciate about this workshop is that Joe, Marilyn, and Todd all have very different approaches, and you can use any ground or varnish you want.  They'll find a way to guide you while allowing you your own vision.  (That kind of nonjudgmental instruction is relatively rare in my experience.)

My goals for the other two violins were to make one in the light amber range (because I have never left an instrument that pale and wanted to try it), and one to emulate the color of the Amati violin I saw at the National Music Museum in South Dakota last summer.  The Amati has this intriguing quality where the color shifts in the light in unusual ways.  All violins look different colors in different light, but this instrument could change in the same light.  (In any light it was beautiful.)
I got to sit with Josh Beyer, a builder from Pittsburgh.  (Or, rather, I saved him the seat next to mine specifically because he is both talented and hilarious.  I have no idea if he found the arrangement as advantageous.)  I met him at the varnish workshop in 2013, and after talking with him about his repeat annual experiences with it when we were both at the National Music Museum I decided to do it again myself.  I'm so glad I did!

I need to share pictures of what Josh brought to varnish because it makes me smile every damn time.  He built a pochette.  A second pochette, actually.  (It's essentially a travel violin--this one is a copy of one built by Stradivari.)  It is so weird looking and cute, and it makes you simultaneously ask "Why?" and "Why not?"  I love it.  It was really quick to varnish, so with limited time I suppose that was a plus. 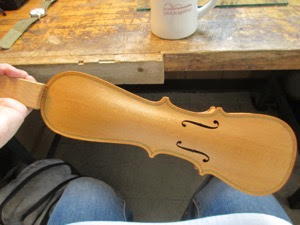 A typical workshop day ran from 9:00 to 5:00.  With good sunlight available to dry things faster it was usually possible to get two coats of varnish on a day, which with three instruments to do kept me pretty busy. 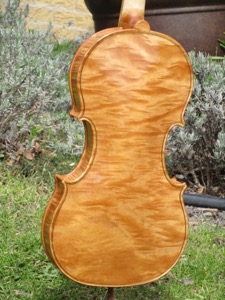 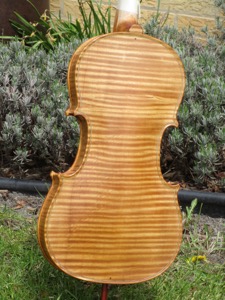 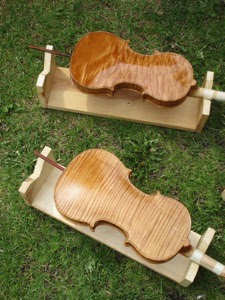 The hardest parts to get to dry in the sun are the ribs on both ends, so it helped to make sure those areas got direct sunlight, too.

At night, or when the weather didn't cooperate, we dried our instruments in UV light boxes made from garbage cans. 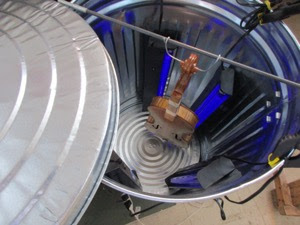 The best thing about the workshop is the chance to try new things and get feedback, as well as watch what other people are doing.  I used colors I've never thought to try before in ways that wouldn't have occurred to me on my own.  Some of the materials I was used to had updated instructions which was good to know.  I had expected to apply varnish on one of my instruments directly with my hands like I had a chance to do the last time, but I always automatically reached for a brush, so I just gave in and declared myself a brush person.  (It's less sticky that way, anyway.) 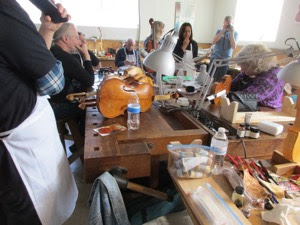 In addition to varnishing, there were various demonstrations (including a particularly informative one by Marilyn on antiquing), occasional doughnuts, and a day of marveling over more than half a dozen rare instruments on loan from a local dealer.
I learned that prep bowls for cooking are great for doing varnish work, and discovered a glass bunny (is it a candle holder?) that I bought on a whim at a nearby thrift store was an excellent turpentine container.  I got my first really extensive lesson in how to prepare an instrument in the white for varnishing, so that was incredibly useful.  (I seemed to be the only one who had never heard of equisetum, but it's nice to finally know what people used before sandpaper.)

The most useful tip I came away with is probably to leave the fingerboard on when varnishing so you don't have to try and re-situate it later.  One of my least favorite steps in violin making is going to all the trouble of putting the fingerboard on right, only to take it off for varnishing and then struggling to get it back on in exactly the same way later.  Not necessary, apparently.  It's possible to simply reach under the board with your brush, and if it's not perfect nobody will see it anyway.  The only trick is to remember to cover the board with reflective foil so that it doesn't absorb heat in the sun and end up cracking.  But from now on I'm permanently gluing the fingerboard on the first time around and leaving it there.

An added fun thing for me was that my mom had an appointment of her own in Chicago at the end of my week, so for my last two nights of the workshop I stayed with her in a hotel.  She had dreams of taking me out for a lovely belated birthday dinner, but we had to settle for Ruby Tuesday's because it was within walking distance, and after all of that commuting I just didn't want to get back into a car if I didn't have to.  I like that my mom got a chance to meet my varnish friends.  She even came to the pizza party the last night and drank wine from my newly purchased CSVM mug.
In terms of my instruments:  The one with the amber color is all polished out and has the board glued back on.  The other two are to their finished colors and have a final clear coat on that still needs to be polished out.  I'll post pictures when all the instruments are finished.  I've been completely slammed with work on my bench after taking a week off, so it's hard to say when I will have a chance to get all three violins set up.  But I'm excited about it!

Which, in the end, is the purpose of the workshop: To leave you inspired and excited about violins and varnishing.  Too often the varnishing process makes people anxious rather than joyful, but it really is fun.  All you need is a little knowledge, practice, and confidence, and I got all three that week.

The whole event went by too quickly.  I miss being able to dedicate full days to doing the work I enjoy most.  I miss having colleagues around for what is usually a process set in isolation.  I miss the daily smell of turpentine. 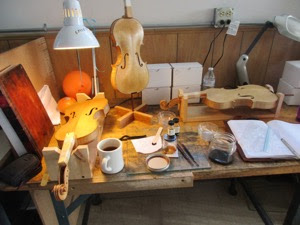 Posted by Korinthia at 9:08 AM