My dad always wrote letters.  Real letters, on paper.  He hand wrote thank you cards and for years longer than he should have he hand addressed every show announcement from the gallery. But in recent years with recurring health scares and preparing to close down his business, (and frankly, the convenience of email) my dad hasn’t written as often.  I call him a few times a week as well, so maybe a letter would seem too out of date by the time it arrived.  I miss the letters, but dad has poured more of his energy into drawing lately, and that’s been quite wonderful.

In any case, sometimes you carry on certain traditions or ways of doing things that make good, logical sense, and then there are also things that feel right because they are familiar or associated with people you love.  For me, sending out out holiday cards falls into the latter category.  Anyone truly interested in knowing what’s happening in my life can read this blog or make contact through things like Facebook anymore.  There are people who need the annual update, but not many.  I wonder if the expense and trouble of holiday cards is really worth it, but I have it in my head that once a year you touch base with people using a hand written note.  That feels right even if the notion is impractical and out of date.

Usually we make our own cards, too, but during the years when Ian was deployed or after I had just given birth that was crazy.  Those years we either used basic photo cards or waited a couple of months and sent out Valentines to everyone instead.  I asked Aden what she thought we should do this year–another photo card or make them ourselves?  Crazy girl after my own heart said, “Make them!”

So I set up what Ian affectionately calls ‘Mommy’s Sweatshop’ and put my kids to work.  We decided to go with a potato print of a pine tree, and when that dried the kids could all decorate the trees with stickers or sequence or whatever they wanted.  We picked a cold, lazy afternoon and cranked them out.

I went ahead and carved the potato, then showed the kids how rub it in the paint and make a print. 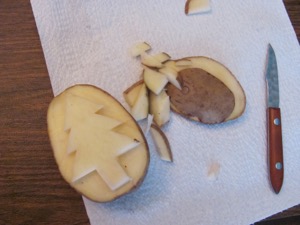 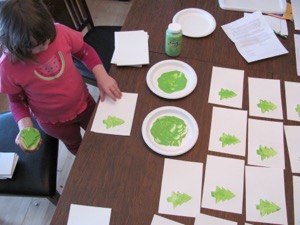 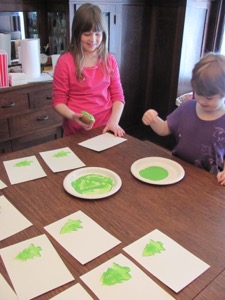 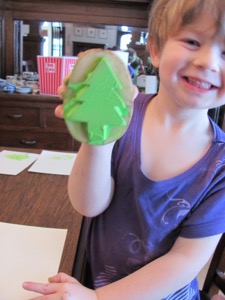 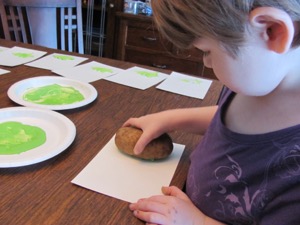 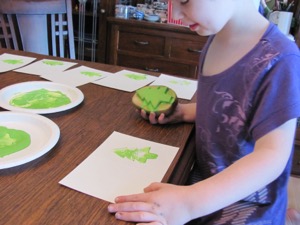 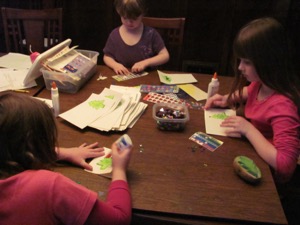 You would think the older kids would be the most helpful at much of this, but honestly, the four-year-old made the majority of the cards.  Aden is particular enough that she spends a long time on each one.  So the few she made are beautiful, but since there were more than 80 cards to do I was trying to encourage speed over beauty.  Mona gets self-conscious, which combined with her instinct to always do things differently can be a minefield some days.  She decided to draw on the cards as well, adding gifts and background color, etc., but then when people remarked on her cards being different (even in the most complimentary way) she backed off from doing any more. 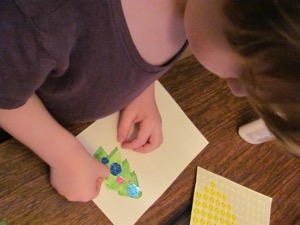 So I was left primarily with Quinn, who uses copious amounts of glue and doesn’t care if there are words on the stickers he picks out.  The funniest thing is he found a page of heart stickers that came from an unused baby book.  Each heart has some milestone written on it, so several trees have ornaments that read things like “Baby’s third tooth” and “First bath.”  Some cards are minimalist with a single sticker in the middle of the tree, and others are covered in butterflies and sequence.  A few are covered with Halloween stickers, which makes for a strange holiday combo card.  Every year that my kids help make cards I save out one to remember what we did, and I’ve picked out this year’s already.  I can’t send it because it’s so awful and funny I can’t bear to part with it: 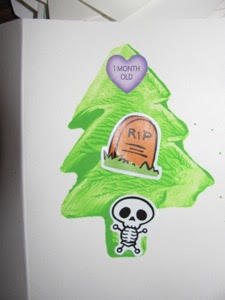 It’s just such an innocently constructed nightmare of a card.  The heart on the top says “1 Month Old”, followed by a headstone and what looks like a baby skeleton.  Quinn just happily picked out stickers he thought looked nice together, but good heavens.
We still have some cards to finish, and now I have to get busy actually writing in them and tucking pictures into a few.  There is only so much Mommy’s Sweatshop can successfully delegate to the smaller people in the house.  Some of it is always just Mommy’s Sweat alone.

Maybe someday I will get more practical and at least pare down my list.  There are people I never hear from myself who I wonder if they puzzle why they even get a card, but the truth is there is no one on the list that I don’t think of fondly, and it’s nice even for just a few moments a year to remember something about the people from my past and let them know they are remembered.  That doesn’t seem like a waste of time, even at a time of year when there is no time to waste.