RIP to a Potter (Babble)

I’m in a bit of shock today.  I just found out a local potter Aden and I took ceramics lessons from last summer, died a few weeks ago.  I called today to follow up with him on future lessons and got a message saying that Dark Star Galleria was closed due to the artist’s untimely death.  Nick was younger than I am, and a talented potter.   We discovered him one day when we had free time before a tooth cleaning appointment, and Aden and I wandered around his gallery above our dentist’s office.

When Ian returned from his last deployment, we opened our own business, and as a result I spent more time than usual away from the children.  I decided that to help make up for it I would do something one evening a week with each child alone.  Mona and I mostly ran errands together but she loved having me to herself, so it was nice.  But Aden and I signed up for pottery.  When we’d talked to Nick that one afternoon before our dentist appointment, we asked if he had classes for kids.  He said no, but for Aden he’d make an exception.  She was so sweet and composed for only six, and just by her enthusiasm and intelligent observations about his work he could tell she was an artist.

We signed up for Wednesday evenings and our neighbor, Julie, joined us too.  We really looked forward to Wednesday nights.  Watching Nick on the wheel was like seeing someone do a magic trick.  He effortlessly made the clay do whatever he wanted and it was amazing.  Aden did her best but had trouble controlling clay on the wheel, so after a few classes, Nick just put a board across her wheel and showed her how to make fish out of the clay instead, and coil pots.  He taught her about making sure there were no bubbles in the clay, and not making things too thick.  I made a ton of tiny pots and our neighbor made a nice bowl for her dog.  More often than not we stopped at a restaurant called LuLu’s afterward and grabbed some pie.


Nick liked to tease Aden, and in a lot of ways she was the more mature of the two.  She loved being in a grown up environment, and Nick liked to play.  They met somewhere in the middle.  I remember being irritated with Aden one evening when we were running late and she was busy gathering up bandaids to take to pottery class.  She’d needed one for a tiny cut the week before and we discovered Nick didn’t have any first aid supplies, so she was going to be prepared.  We arrived at class to discover Nick had cut himself badly on a large bowl that had a sharp piece attached underneath.  Aden went about patching him up with great seriousness.  Nick looked down at his bandaid covered hand with wonder and amusement.  Aden beamed.  I ended up buying the bowl (after Nick ground down the sharp bit).  It broke recently and I glued it back together.  I almost didn’t because it looks goofy and I figured I should just go back to the gallery and buy a new one.  But now I know there won’t be any new ones.  Not that the one of a kind bowl could really be replaced.  Neither can Nick.

I haven’t decided how to break it to Aden.  She’s been bugging me to call Nick a lot lately.  She misses him and the grown up pottery class.  I made him some tools that he was going to trade for more pottery lessons, and so every week Aden asks me if I’ve called Nick yet to set up a day and time.  We used to stop by his gallery on the way home from choir to chat and then pick up a couple of spring rolls from the Chinese restaurant in the same building.  Nick was looking forward to having Aden in a class again, and he said he’d even make room for Mona, too, since she’s older now.

Aden’s never lost anything bigger than a pet bunny, and that was half her little life ago.  I’m worried that having to contemplate death this directly will make her dad’s situation more frightening for her.  She knows that war is about fighting and that sometimes people die, but to know someone you liked could be gone so suddenly is even hard for me to accept.  Aden’s only seven.  I don’t want to tell her but I have to.  I think I’ll wait until we have some time alone tonight, after violin lessons and homework.

I will have to tell her, and she’ll cry, and I’ll cry.  And then I will do my best to convince her the thing to focus on is how lucky we were to have known him at all.  That he created beautiful things that will help us remember him.  That life is about appreciating what we have and not choosing to drown in sorrow over the things that are lost to us.  If I give the speech well enough maybe I’ll believe it too. 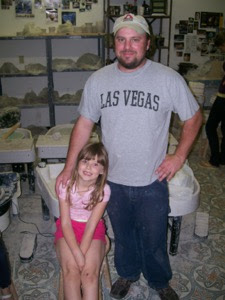