Thanks again to people who commented on my Garage vs Deck dilemma.  When I made up my mind on the compromise garage I decided I wanted it done before Ian got home.  That didn’t exactly work out (partially because of all the rain here, and partially because they had to special order a door that held everything up at the end), but the really important part of it was done in time which was the mural wall that faces the house.  We were able to decorate that with a ‘Welcome Home’ sign for Ian before he got back to Milwaukee.

To reiterate, the problem with the old garage was that it was very small and (inside) pretty icky, and starting to cave in on one side.  To make a two car garage the entrance would have to face the alley.  The problem with that is the city would require us to set the garage four feet back, which would have chopped deeply into our deck and put the garage uncomfortably close to the house.  So the design of the new garage would have a ‘reverse gable’ (which means the roof peak would run the other direction) and the part of the roof that hung over the entrance would be eight feet long to provide some protection for whatever car was parked outside. There was no way to have any poles to support the overhang and still be able to get into the garage, so it had to be done with cantilevers, which meant the garage ended up being extra tall to provide room for that kind of bracing.

Apparently nothing could be done at 10:00, so he shut off the power so I wouldn’t have to be awake for that the next time he came, and he left.  The next day I went down to Chicago to pick up my brother for a short visit, and when I left at 2:00 my garage was still untouched.  I told Barrett on the drive up to Milwaukee that when we got here I might have a garage, or I might not.  Impossible to know.  What I had was a garage with no doors or windows: 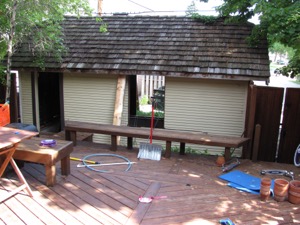 Nothing happened Saturday.  Then Sunday morning at around 7:00 a.m. there was a ton of chainsaw noise and the whole thing came down.  It was weird to watch because somehow he did the roof last.  I guess it’s good I build violins and don’t demolish buildings because I would have done it from the top down, and apparently that would have been the wrong way to go.  It was a crazy amount of construction/destruction noise on a Sunday.  Aden suggested maybe the guy didn’t do it on Saturday because he could be Jewish.  I told her I thought it was unlikely, but an interesting hypothesis. For a few days my kids climbed past the yellow caution tape to play on the remaining concrete slab.  I usually came out to find a folding chair and a hula hoop out there.  Not quite sure what that game was, but it kept them very amused.

Next, there was a noisy morning of tearing out all the concrete.  That left an amazing muddy mess that got rained on frequently. 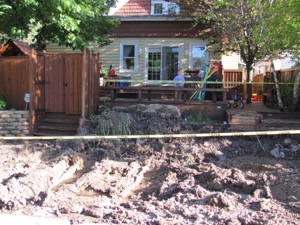 Now, the funny thing at this point was the backyard has been so boxed in for so long that it was weird having it open.  I noticed many neighbors suddenly deciding to walk their dogs down the alley to kind of take a peek at the back of our house.  I actually started going out and picking up the toys a bit more just because, well, people could see.  The family room has a lot of windows that I never worried about before, because the garage and fencing made that whole space private.  It was nice to see out, though.  I have a friend who keeps suggesting I could continue the fence farther up along the side yard, but I’m more inclined to tear fences down than put more up.  I like having a private play space for the kids to use where they aren’t observable from the street, but my personal preference is for open spaces.  Anyway, the mud functioned as a barrier to the yard, so it was like having a moat.

After that came the new concrete, and I started to get a sense of how much bigger the new garage was going to be.  We expanded it back farther, and in toward the deck, and out toward the alley a little.  It’s funny, because it could easily hold two cars, there’s just no way to get them both in there.  Or maybe someday we could each have our own tiny Smart Car and we could get them all inside.  In any case, it will be wonderful to have room for things like bikes and a lawnmower, etc., instead of having those things strewn all over the yard like they are now. 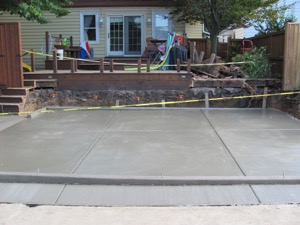 After about a week of watching concrete dry, construction happened in a blink.  The kids watched a lot of it from above on the terrace. 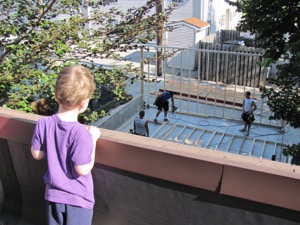 Then I started getting panicky because the thing was looking huge.  Obscenely huge, and I was wondering if I’d done the right thing or made a big expensive mistake.  And it could have been more huge, because the day they came to pour the concrete they tried to talk me into cutting a couple of feet into the deck and I told them to change their design instead.  If I’d wanted to cut into the deck we’d have gone with a two car garage, and we’d already lost a birch tree that I was sad had to come down, so no cutting into the deck.  (Because of the last minute design change they had to order a different door, which is why that didn’t happen on time.) 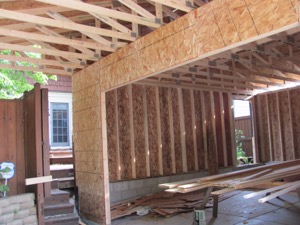 My next door neighbor assured me it was going to be fine, even though the garage looks almost as big as her house.  She said I was probably just used to the open space after a few weeks, and we’d get used to the garage once it was finished.  She was right, of course, but that wasn’t a nice feeling that day, wondering if I’d made a giant goof.

My main concern at that point was getting the mural wall finished.  The kids and I had discussed what we wanted to do, but it all hinged on the caulk between the stucco boards drying in time for us to paint.  We bought almost a dozen sample size containers of exterior latex paint in lots of bright colors and kept poking the caulk.  After the kids were in bed I found a bucket in the basement of the same yellow the last owners had used to paint the house with a couple of years back.  I went out in the dark and rolled color onto the primed boards everyplace but the seams.  (Looks yellow here, doesn’t it?  After the YELLOW went on that the kids picked out for their mural, the background color didn’t look yellow at all anymore.)  It was funny painting in the dark, racing to finish a house project before Ian returned from his deployment.

The last time he finished a tour in Iraq I’d spent a couple of weeks painting our new front porch on the old house every night until about 2:00 a.m. to get it done in time.  I thought of that as I swatted mosquitoes and tried not to drip paint on the deck as I worked.  I wondered why I wasn’t just doing it in the daytime like a normal person, but then when the kids were awake the next day and begged to help I remembered exactly why doing it at midnight was preferable.  There are many projects that I’m willing to find ways for them to help, but not on a deadline. 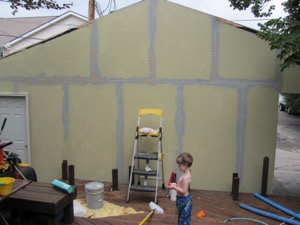 When the caulk was dry and the last of the background paint was up and also dry, it was time to be creative!  I sketched out some letters and boxes with a sharpie, and each kid got a box to paint however he or she wanted.  Then we all collaborated on decorating the rest of the background.  Even my neighbor, Julie, pitched in!  She did the morning glories on the left, which is good, because that’s the part she’s most likely to see from her own yard, so if she doesn’t like it she has only herself to blame.  (I think she did an amazing job and I love seeing her flowers up as part of our mural.) 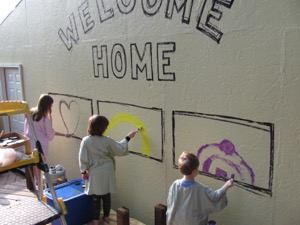 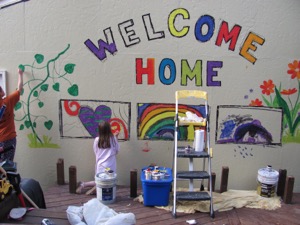 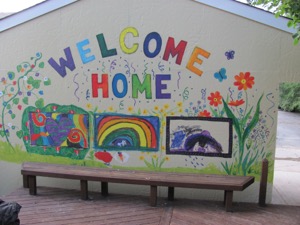 The kids are really proud of the work they did.  It certainly personalizes the garage!  Ian loved it.  I made the decision to go with “Welcome Home” as the message, as opposed to ‘Welcome Home Daddy’ or ‘Welcome Home Ian’ because I figure the odds are good we may not get around to painting again anytime in the near future, and this way if it’s still up in ten years it just welcomes home anyone getting back from work or school or wherever.
And here is the finished garage!  (Sort of.  The electrician still has to come out and make it possible to, I don’t know….open the door.)  But to all outward appearances it’s done, and I’m glad.  There is still some finishing work to do to the deck to get it to work up against the garage, but that will be another project.  There is always another project. 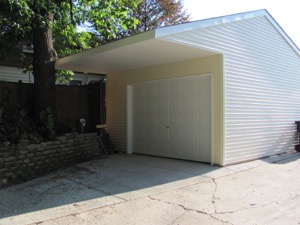