Only Child for Only a While

My girls were recently at a camp for school called Nature's Classroom.  (A friend asked me if Nature's Classroom would teach them all about frostbite and hypothermia.)  The camping trip was pushed back a day due to super-extreme cold so that the kids could experience it in merely extreme cold.  They had a great time, despite the fact that helping them pack reduced me to laughing and crying simultaneously (why can't they find basic things by themselves?!?) and Mona didn't discover until a slushy hike that her boots had holes in the heels.  They came back with stories of upper bunks vs lower bunks, games for learning about bats, and a night hike where they discovered tricks for seeing better in the dark.

The upper elementary students go every year, but this was the first time for two nights away instead of just one, and Aden has been away to camp for school twice, but his was Mona's first year.  Which meant for two days Quinn was the only child at home.

It was a brief experiment in having an only child, but interesting nonetheless.  It was markedly different from having three.  I try my best to get time one-on-one with my kids when I can, but that usually means for an errand or a game.  Never, say, breakfast.

Some people express surprise that we "go to the trouble" of making pancakes or French toast or some other hot breakfast every morning before school.  The truth is it's cheaper and faster than anything else.  We have a griddle that fits over two burners on the stove and either Ian or I can crank out pancakes from scratch and have them on the table in about ten minutes from the time we hit the kitchen.  But for one kid?  I had no idea what to make for one kid.  The last time I had one kid she was still into dry Cheerios and yogurt.  I went with oatmeal because it's something the girls don't really eat but Quinn and I do, and I could make a small batch.

And I decided it was important that it was something I eat as well, because normally I leave the kids on their own to eat breakfast, but it seemed weird to have Quinn eat all by himself.

The whole experience was so quiet.  And uneventful.  The adults in the house were not outnumbered.  With three kids we are always herding people and that impacts many decisions from which car to take to when we can do things.  With one kid, well, it's like we had lives and he was there, too.


It got me thinking about how differently people I know with only children deal with them.  They appear to negotiate all the time.  There is flexibility with one child, and I remember that when I just had Aden.  We could cater our schedule to her whims and needs so her opinion seemed to matter.  When she was tired we let her nap.  When she was hungry we fed her.  If she lost interest in an activity we ended it.

But with more than one child you stop asking and start telling.  Because if you are at the zoo and you survey the group about who wants to stay and who wants to go they won't all agree, and you are guaranteed someone will be unhappy.

Mona and Quinn as toddlers were entirely at the mercy of the schedules of an older sibling.  Nap time for Mona was the bane of my existence for the year and half Ian was deployed the first time because she needed a two hour nap or she was a cranky mess the rest of the day, but we had one shot at it.  If she fell asleep in the car and you tried to move her unsuccessfully, that was that.  And nap time fell precisely at Aden's half-day pickup from school.  For Mona there was no napping when she was tired and eating when she was hungry, and if she didn't feel like being someplace Aden was already scheduled to go, too bad.  Flexibility was in short supply.

Aden we used to take all kinds of places that might interest her, as well as us.  There were trips every week to museums and parks and music classes.  But once you form a routine of school and an extra activity or two, there's not much rime left to carve out space for anything else, especially when beyond things like meals and chores and work you factor in random dentist appointments and invitations to birthday parties, etc.

As a result, Quinn's life has always revolved around where his sisters need to go.  There were days when he was a toddler that he would fall asleep in the car when we'd get Mona at the half-day pickup and he wouldn't wake up until after we got Aden a few hours later, so from his perspective he never left the car.  Instead of his own music classes he's sat in the waiting rooms outside his sisters' music classes.  He was introduced to foods and movies and activities that were already in play in our home and he had to adapt rather than lead.

I do think there is something to birth order and personality because we can be shaped by such mundane logistics.  I have no idea who Quinn would be without his sisters.

Apparently neither does he.  One of the oddest things about having him as an only child for a couple of days was to realize he either really doesn't have a preference about certain things, or he's developed a certain amount of learned helplessness to cope with his sibling dominated environment.  Quinn is easygoing.  Not always, and he definitely has his own opinions, but he's used to being told, "This is what we are doing today" not being asked, "What would you like to do today?"

Because in his lifetime there has been no room for negotiation.  Whether he wants to come along or eat now or do this has been irrelevant.

It's not as if we don't try to make time for what interests Quinn.  We do.  I was thrilled when he declared an interest in piano and immediately arranged to get him lessons.  I helped him make a map puzzle to complete his collection.  He can choose anything he wants to be for Halloween and I will make it happen.

But, when most of what you have to do is get along and go along, your first instinct is not to demand anything, or get too attached to certain preferences.  Insanity (or at least frustration) that way lies.

So for my couple of days with Quinn as my only child I'd ask him, "What would you like to do?  Is there anyplace you want to go?  What shall we have for dinner?" he had no answers.  He'd just shrug and say sweetly, "Anything!"  He didn't really seem to care, and he seemed confused and annoyed by the repetition of my questions.  This was new and strange territory, and he didn't want to go there.

I tried to pick things that I thought he would like, but I know he would have gone along with whatever I decided.  I had to go to extremes, like suggesting we make lasagna for breakfast when I know full well he doesn't like lasagna even for dinner, for him to make any sort of definitive statements about what he did or did not want.  My dear little boy was just happy to have me all to himself, hanging out for hours after school with me at the violin store like he used to when he was small.

I felt the need to keep checking on him to see if he was happy when we were home, because normally he has his sisters and I didn't want him to feel lonely.  But he wasn't all that lonely.  He entertained himself and had my whole lap when it was time to read together.

Quinn missed his sisters, though.  We all did.  The house was too quiet without them.  Driving the minivan was overkill.  The dog slept in their room each night, cuddled up in a blanket he dragged off Aden's bed.

Now the girls are home and life is back to normal.  The kids are a heap of puppies again, huddled together to watch Aden navigate her Minecraft games and coming up with elaborate toy arrangements on the floors.  They are a good group, both as individuals and as a set.  I'm glad to have each of them and I'm glad they have each other.

It's always good to deviate enough from the routine to remember why you made the decisions that led to the routine in the first place.  This week that included having enough time alone with Quinn to surprise his sisters with colored balls of ice used to line the path home.  That's a path I'm happy we're on together. 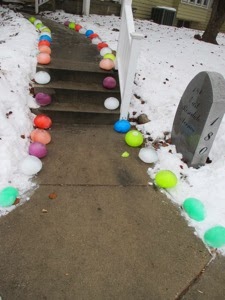