For Love of a Dog

This is our dog, Chipper.
We met him at the pound on 11/11/11 and adopted him two days later.  They think he was about two years old then, so I guess he's now about four.  He seems to be some kind of poodle/cocker spaniel/something with an under-bite like a Lhasa-apso mix.  We sometimes refer to him as a Lhasa-cock-a-poo.  More often we refer to him as "Chipper-Dog, " "Silly Dog," "Dumb Dog," or "No!"

I have mixed feelings about our dog.  Right now, as I'm typing, he's snuggled up next to me all warm and adorable and I love him.  Other times not so much.

Aden's first word was "doggie" and she has always wanted a dog.  When all the kids were finally old enough that it didn't seem like such a ridiculous idea to add another set of chores to our home, I told them we could start looking.  The dog would have to be a type that didn't shed because Ian has allergies, and I wanted it to be a rescue.  It was important to me to save a dog that really needed a home.

Chipper is cute.  That much everyone can agree on.  He's thirteen pounds of scruffy fluff and wiggle.  He is the fastest dog I have ever seen.  He likes children, hates men (except for Ian whom he respects/adores), only wants to sit next to my mom when she visits, and loves to play fetch.


The dog has his downsides, but he doesn't mean to be a bad dog.  He's a fraidy-dog, really.  Scared in a world where he wants to protect us and is too small to do so.  He gets blinded by his desire for things like chicken (and, strangely, chunks of raw pumpkin) and will panic if someone enters the kitchen while I'm trying to cook because he doesn't want competition for any scraps that hit the floor.  Lord help you if you approach him while he's in a "cozy spot."  He protects the children from me if I enter their room at night.  He inexplicably has accidents in the house even if we walk him five times a day.  I have it in mind to make one of those "--insert number-- Of Days Without An Accident" signs as it applies to Chipper and his behavior, and we won't need more than than a couple of digits because I think the highest we've ever gotten is maybe two.

And there is barking.  He barks at terrifying car doors closing in the distance.  He barks if you take too long to throw his toy.  He barks when people are at the door or if he imagines there are people at the door.  Of all the dogs we could have picked, we found one that howls along with violin playing.  He whines and barks as my children practice, and we can't tell if he's doing it in protest or sympathy.  (This, along with barking at strangers, makes him the worst shop dog for a violin store ever.)  For a while we were working on curbing all the barking, but since a series of break-ins in our neighborhood we've decided the barking works for us.  He's not great protection (unless someone were to break in and try to steal chicken off the floor), but as an alarm system he sort of earns his keep.

(Chipper in sheepdog mode, and then as a sleek dog after a grooming:) 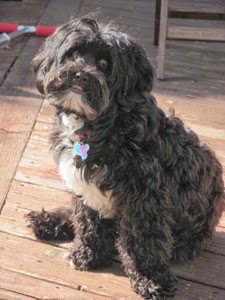 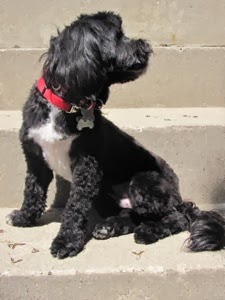 The worst is when he snaps and gets scary.  He's bitten both of my brothers for the offense of being tall, unpredictable men.  He barked savagely at my sister-in-law when she tried to approach her daughter and he was resting protectively at the girl's feet.  He bit Mona the first month we had him, but a lot of that was on her because she did every last thing on the list we told her not to do with the dog.  (Corner him, move wildly, shriek, try to take food out of his mouth....  After a long, serious discussion there has not been a repeat of that.)  The bites are more like strong nips--there's no tearing skin or blood or even persistence (he backs off to just barking pretty fast) but it's not good. 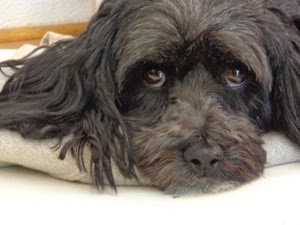 He's gotten better, but just when we let down our guard and think he's mellowed out he'll turn on someone unexpectedly.  He'll get me to lift him up onto my bed, then snarl when I try to get in it, even though it was fine the previous hundred times before.  When he gets weird we ban him from the furniture, but it's hard to want to stick to because he's such an appealing little lap dog.  I feel like if I can't enjoy a good cuddle on the couch with my dog, what's the point? 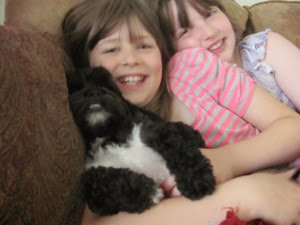 And for the most part he is cuddly.  He lets the kids scoop him up and hold him any way they'd like.  He's content to curl up near them wherever they are. 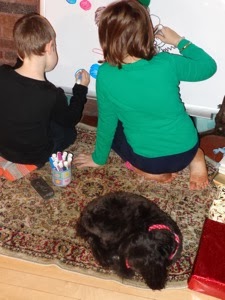 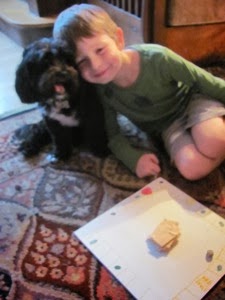 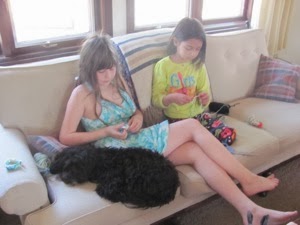 I have a hard time justifying his presence in our home to my brothers who don't get to experience him in what we think of as his normal state.  When it's just our own little family in our regular routine, Chipper is our silly little dog: Thrilled to see us every time we return home, running in circles and dropping toys at our feet, snuggling up and letting the children handle him like a rag doll, following at our heels happily as we move from room to room flattering us that we the most wonderful people to be with in the world.
When the dog knows what to expect and we make the effort to avoid problems he's fine.  He can be on the bed or couch as long as we make him get off before we get on.  The dog or the kids can be in the kitchen when I'm cooking, but not both.  When we have company we keep him on a leash to be safe.  It's just tricky working to head off problems all the time, and when we fail at odd moments I wonder if the dog would be better off elsewhere.  But at this point if we were to give up the dog I don't think my children would ever forgive us.  So, he's not a particularly good dog, but he is what he is, and our children love him more than you can imagine.

He loves us and he loves being home.  All he wants is for the five of us to be with him at home (and for us to drop meat from time to time).  The kids once asked about having something like a bird or a lizard for a pet, and I told them I understood why other people did that, but I am personally uncomfortable with keeping anything that would prefer to be in the wild.  I think a good test of whether an animal might make a good pet or not is to know what it would do if you left the door open.  Anything looking for a chance to escape is probably not something you should be keeping.  We could prop all our doors open all day long and Chipper's not going anywhere unless it's to follow us.  He knows a good thing when he's found it.  That dog is home.

I can't believe we've now had Chipper for two years.  It's hard to picture our lives without him.  He makes travel awkward and his walk schedule can be inconvenient, and he once ate all the carefully carved teeth off my Jack-o-Lantern, but when I'm home alone I am grateful for his company.  Our dog is cute but weird, gross but funny.  I'm not always convinced he's the right dog for our family, but I do believe we are the right family for this dog.  He drives us crazy, but he makes us smile.  We love our silly dog.
Happy "Birthday," Chipper.
Posted by Korinthia at 7:32 PM