The Work of Art

The amount of work that goes into creating good art is undervalued.  I think the overall problem is the artistic process is misunderstood.  We talk about "talent" and having "a gift" as if people in creative fields just come by what they do magically.

Talent is a starting point, not an end in itself.  The gift is an opportunity, not a finished product.  Even if you start at a more advanced place than others, that simply raises the bar for what you can or should do.

My parents are artists.  They ran a gallery for 40 years.  They often apologized to us when we were growing up that they should have realized you have to be rich first and then open a gallery, and that it doesn't work the other way around.  We never lacked for anything, so whatever depths their financial struggles sunk to we remained largely unaware of them.  We admired them for doing what they found interesting, even though it was often hard, and we learned many valuable things.

We saw, up close, the time and effort and thought that goes into creating art.  There are many drawings abandoned along the way before one finds its way to completion.  There is the challenge of having to work when time allows rather than when inspiration hits.  Most people when they create art do it alone.  You can't usually get help with it and still claim it to be yours.  There is trial and error and frustration, but eventually beauty.  When a piece of art (or music, or writing) is just right it's as if it was always meant to be.  After untold hours of preparation and toil the result can look effortless.

Unfortunately to too many without direct experience in creative fields, they believe it really is.

I've been watching my daughter, Mona, this week with great interest.  Mona is many things, and one of those things happens to be an artist.  All of my kids have a decent degree of talent when it comes to art.  Mona is the one at this time willing to struggle for it.

She has been building "creations" now for years and they are ever evolving and improving.  She's gone from simple paper cutouts to hand colored tape to duct tape and recently to using wire as a foundation so that she can expand the limits of what her creations can be.  They are detailed and thoughtful.  There are many prototypes and pieces abandoned and begun again until they are right.

Her latest school project is a presentation on bats that she's doing with a friend.  In class the two of them work on research and writing.  At home, Mona has been working on models.  She's been working hard.


Mona wanted the bats to be accurate.  She didn't want them to look like toys.  She experimented with available materials and when she grew frustrated I offered to take her to the fabric store and see what she could find there that would help.  I sacrificed two eyeglass cleaning cloths to the cause because she liked the weight and texture of them.  I showed her how to use the glue gun on her own, and she told me after the first day with it that she was getting tough to the heat of the glue when she had to touch it to insure something was in the right place as it set.  She had us get her up at 5:00 a.m. every morning for a week, and I let her stay up past bedtime to keep working. 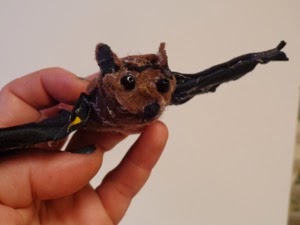 She consulted me a couple of times to get a fresh perspective, which impressed me because she can be private with her work, and reaching out is a new (and I believe positive) development.  At one point she'd made and rejected two prototypes of the little brown bat because the face kept coming out too much like a kitten and she couldn't figure out why.  I told her bats are more triangular, and that if she moved the eyes farther apart and down and angled the ears differently it would help.  I could see the light bulb switch on in her mind as that idea clicked. She was so excited by the difference in the bat face once she made the adjustments that she looked as if she were walking on a cloud for the rest of the day.

Mona has been living and breathing and contemplating these bats for weeks.  And they are great.  Photos don't do them justice at all. 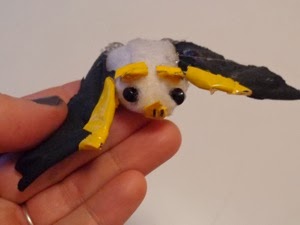 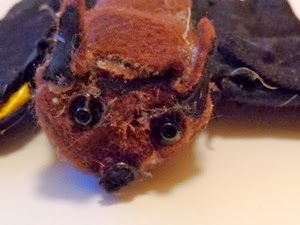 Photos don't capture any of her creations very well, I'm afraid.  Maybe I just need to invest in a really good camera, but the things she makes are so interesting to hold and turn.  Sculpture is like music in that regard, in that there is a time element involved.  You can't take in a sculpture all at once from any given angle and truly appreciate it.

Mona can work very quickly, but most of her recent works are longer-term projects that she thinks about as she goes.


She started the head on this red dragon several months ago.  She debated whether or not she wanted to do a body because she wasn't sure how to do it the way she wanted.  Since then she's gotten proficient with wire and decided it was possible to build a body.  Currently she's contemplating wings.  She can't decide on the size or shape, but she's thinking it would be nice if they folded.  When she hits on a design in her mind that looks plausible she'll experiment on a smaller version, and eventually finish the dragon.  But not before she can make it right.  She's patient.  I can't wait to see it when it's done. 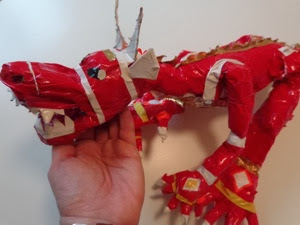 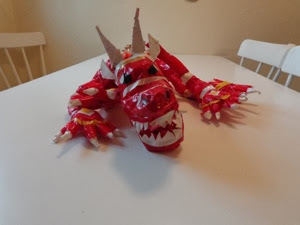 Here's another dragon she's been working on.  This one uses plastic knives in the ears and mouth.  I'm particularly struck by the amount of work she's put into making the mouth close properly around all the teeth. 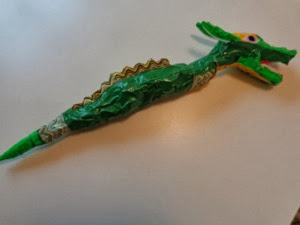 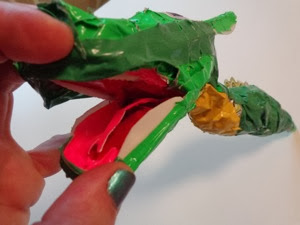 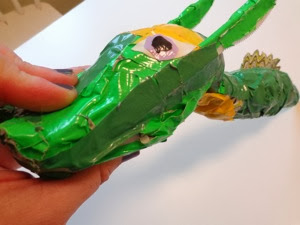 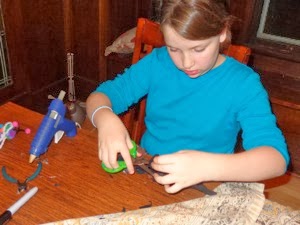 Mona's teacher told me last year that one of the things he liked about having her in his class was that she was the perfect example of what Montessori education is for.  She's given room to learn in ways that suit her.  Some kids are easy to test.  Mona isn't.  She's brilliant.  She works very hard.  But there is no "Build a dragon with a hinged jaw" section on any of the insane number of standardized tests the schools are being forced to administer this year.

When I watch Mona do the hard and satisfying work of using her hands to make what's in her head become real, I recognize that's what I do.  Those are skills that earn my living.  My whole business is based on using my hands and being observant and using tools and experimenting with materials.  I make violins, but people enjoy my store because I make them smile with creations that sparkle, and tick, and light up a room.

Of all my kids I see myself most in Mona.  Which means on one level I feel for her, because I know how hard some of my struggles have been and I would rather she had an easier road.  But on another, I am assured she will be fine.  No one has ever accused me of not being persistent.  Mona will succeed regardless of how she tests because she has the true measure of what it takes to get where she wants to go, in art or otherwise.

She may be young, but Mona is an artist who already understands and appreciates that creating something takes work, not magic.  I can only imagine what she'll do at age 10. 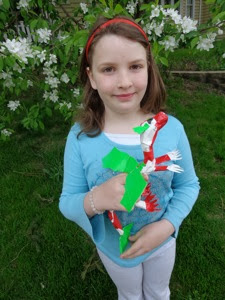 Posted by Korinthia at 8:05 PM