The most fun thing about running my own business is getting to decide the look of the store space and the things that go in it.  I get to be creative, and I get to try new things just because I feel like it.  I have an excuse to make some of the designs in my head become real.  Few things make me happier.

The first thing I made for my violin store when we opened back in 2008 was a big clock. 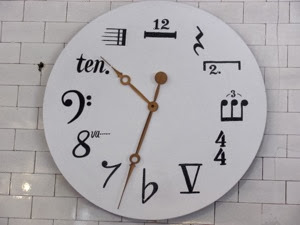 Before we even had a space to rent in the fall of 2007, just paperwork declaring Korinthian Violins a real company and a small collection of rental instruments piling up in the guest room, I knew I wanted to make a music clock.  I thought about it at random moments, and sketched it on paper when I had time.  I didn't want the music symbols to be random like I've seen on commercially available clocks.  I wanted it to amuse actual musicians.

Eventually I figured out what I wanted for every number on the clock, and I went to Target and bought the biggest one they had and painted it white.  (Unfortunately, that clock also had a big hole by the 6 for some sort of decorative pendulum thing in it, and I had to fill that in before I could paint.  I still see it, but I don't think other people do.)  I sketched out each symbol lightly in pencil, then painted them with heavy, black watercolor.  Now years later the symbols have all kind of naturally crackled if you look at them up close, but I kind of like that.

Almost everyone who comes into the store for the first time comments on the clock.  People love the clock, and it gets photographed often.  (Supposedly people "pin it," but I'm never on Pinterest so I wouldn't know.  Every once in a while I get an email informing me another person is "following me on Pinterest!" and I always think, "Why?  You will be SO disappointed with just my three lizard related pins.")

Sometimes I'm prompted to tell people how the clock wall symbolizes why my husband and I make a good team.  Beneath the clock on the office cork-board we have our occupancy permit.  That was the first thing Ian got for the store.  We must have it displayed in order to legally operate our business.  The clock is nice, but technically we don't have to have it.  However, nobody comes in and compliments our occupancy permit.  Everybody comments on the clock.  So, without me there would be no reason for anyone to visit our store, but without Ian there wouldn't be a store.  Take either of us out of the equation and it all falls apart. 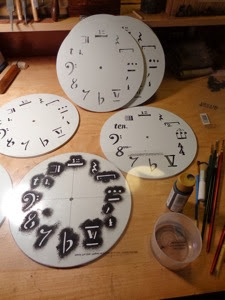 In any case, I've had enough people tell me in recent years that they wished smaller versions of my clock were available for sale that I finally decided to make some.  I ordered some basic wooden clocks to paint and I cut myself a stencil.  I still have to do the bulk of the painting freehand, but it's fun.  The clocks are proving to be an entertaining project.  (Finding a good way to box them will be the next one, although I'm betting that will be less entertaining.) 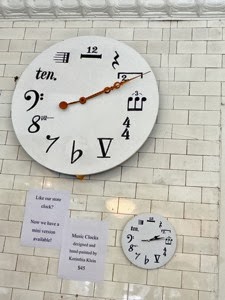 I don't really have experience with stencils, so I decided to buy real stencil plastic and a heated stencil cutter.  I officially don't like the thing.  Maybe I don't have the right touch for it, but it was hard to control the quality of the cut, and I felt I might have done a better job with an x-acto knife.  It was worth a try, and maybe someday I'll find a good use for it.

But the new little clocks are coming out cute!  We'll see if they actually sell or not.  That, or I've just created a stack of handy gifts for people down the line.


Any non-musicians want an explanation of the symbols?  Here you go! 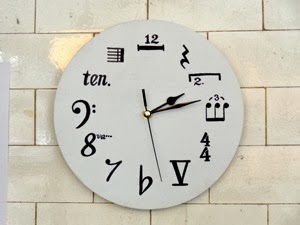 1 is a quarter rest.  It means you are silent for one beat.

2 is a second ending.  Sometimes when you repeat a section of music the second time through the last little bit of it is different, and this symbol written over the top of that new ending shows you which little part has changed.

3 is a triplet.  It's when you fit three notes into a single beat.

4 is a 4/4 time signature.  It means there are four beats in a measure and a quarter note gets one count.

5 is a dominant chord.  We use Roman numerals to represent different chord relationships.

6 is a flat symbol.  It lowers pitches by a half step, and it kind of looks like a 6.

7 is an eighth rest (which means you are silent for half a beat), but it just looks like a 7.

8 is an octave symbol.  It means play everything under it an octave higher than printed.

10 is a tenuto mark.  Tenuto means you need to add emphasis to a note.

11 is a double bar, which is used to indicate the end of the piece.  A pair of vertical, parallel lines is pretty much an 11.

12 is a multimeasure rest.  If you have to be silent for many measures this is a more efficient way to write it, so in this case it represents 12 measures of rest.  (Viola players are no strangers to this symbol.)

So that's my clock.  (And looking the actual one here in front of me I realize blogging time is up!  Time to get back to work.  Why don't these violins repair themselves?)
Posted by Korinthia at 12:52 PM