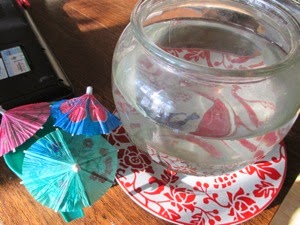 A couple of months after Mona got her fish she came to me expressing doubt about her pet.  Maybe the fish was boring?  Maybe this wasn't such a good idea?

But then disaster struck.  One evening when Mona was cleaning out the fishbowl and left Rainbow on the dining room table in a cup, he somehow jumped out and ended up on the floor.  I happened to spot him before it was too late and we got him back into his bowl where after a moment he was fine, but not before we listened to screaming from Mona the likes of which I'd never heard.  She was completely traumatized by the whole notion of losing her fish and after that there was no talk about possibly giving up Rainbow.

Mona actually said to me not long ago that Rainbow changed her life.  I'm still not entirely sure what this means, but she stands by it, and I believe her.

In preparation for the fish dying we talked about what she wanted to do when it finally happened.  These were painful discussions for her, but I explained that I didn't want to accidentally do the wrong thing.  She was adamant that the fish not be disposed of in her absence.  She did not want him flushed.  At first she insisted he should be boxed in a manner so that she would never have to leave him behind if we moved.

I talked to Mona about other pets that have died.  I told her how sad her dad and I were when we lost our first bunny, Cujo, and how we buried her in the backyard at our old house across the street.  Then I asked if she remembered our other bunnies, Dot and Scout, from when she was little.  She said she did.  I reminded her that those bunnies both died in the winter when we couldn't bury them ourselves, so we left them for the vet to dispose of.  I asked her if it made any difference in how we remembered them compared to Cujo, and she agreed it didn't.  We remember the bunnies by telling their stories and looking at pictures, not by going to where their bodies are.

She told me how upsetting it was to know Rainbow was going to die.  I told her how upsetting it was when our grandparents' dog, Rusty, was put down when we stepped out to the park during a vacation visit, and we were angry we didn't get to say goodbye.  (My grandparents insisted it was a coincidence that they took Rusty to the vet right after we went to the park, but I'm still not sure I believe that.)  A lingering death is hard, but so is a sudden one.

Finally I told her about losing my hamster, Cuddly, when I was in third grade.  This pet story resonated with her the most because Cuddly had been just mine.  When I was growing up I always felt as if my mom and dad were a team, and my brothers had each other, and I was on my own.  Cuddly changed that because he was a cute little fur ball who belonged just to me and we could be a team.  When I found him cold and dead on Easter morning it was horrible.  Mona tried to explain why having a fish was different from having a hamster, but it was hard to decipher through the weeping.

She did agree that maybe we didn't need to somehow hang onto the fish once he was dead.  I pointed out that our house already had a headstone in front of it.  Maybe when the time came we could put the fish under it?  Mona thought it over and decided she could live with that idea. 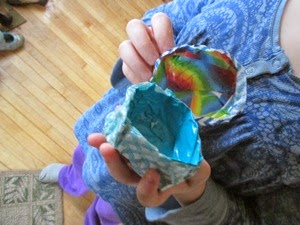 The morning the fish died we let Mona go in late to school.  She wept in my arms for a while, and then I asked her if she could make him a little box.  This calmed her down and gave her focus, and I could hear her humming little songs as she worked.

When the box was finished she let me transfer the fish into it and seal it up.  I got out the pet burying shovel (the one we had to go out and buy specifically to bury our first bunny--ugh, what a depressing errand that was), and made a deep hole by our headstone.

When it was done we placed Rainbow at the bottom, Mona tossed on the first handfuls of dirt, and then we refilled the rest of the hole.  We wrote Rainbow's name in small letters with a Sharpie along the bottom of the headstone. 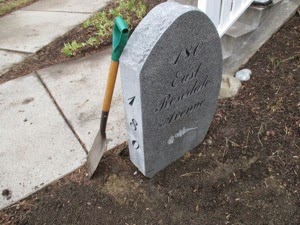 I promised Mona she could plant something beautiful there every Spring.  She loved that idea.

Mona's doing okay.  We received lots of lovely words of condolence from friends and family.  She was feeling somewhat isolated in her grief since the fish only really mattered to her and she knew she was the only one to shed tears for him, but knowing how many people care about her and her sadness has helped.

I've heard it said that accepting death is the last lesson our pets teach us.  When Cujo died it was my husband's first experience with the death of something he loved, and he said it was awful and asked me how do people do this, lose pets over and over?  It's never something you get used to.  Everything dies, and it hurts.

I promised Mona that the pain would fade.  I told her the sadness never goes away, but the physical pain would subside.  I know it's just a fish.  But it's the first thing she's been responsible for that she's lost, and when you love something death is never easy.

I held my Mona after we buried Rainbow.  Then she wiped away her tears and let me take her to school.  I asked if she wanted me to go in with her to pick up her tardy pass, and she said no, she'd be fine on her own.  I watched her as she walked across the playground, waited at the door to be buzzed in, and disappeared inside the school.

Then I cried for all the things I've lost, too.
Posted by Korinthia at 10:49 PM