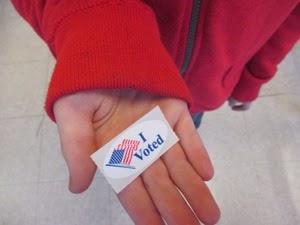 I just got back from voting.

When we used to live directly across the street our polling place was the nearby school.  Since we moved to this side of the street we go vote at a DMV near Chuck E Cheese.  Just a short walk on this wet and windy day.

The kids are off from school so Quinn came along.  The girls didn't see the appeal in watching us stand in line, get a sticker, and come home.  But Quinn will still happily go wherever I go.  He holds my hand and hops along in an un-rhythmic manner that would send me off balance if he were much bigger.

I'm disheartened by how contentious politics have become in Wisconsin.  I know that's the case nationwide, but the ugliness stirred up around the recall election a couple of years ago has twisted things in a manner that cuts deeply.  It's personal in a way that isn't healthy.  People don't just disagree, they are offended, and that makes reasonable discussion very hard.  But I hold out hope that there may still be causes we can all rally around regardless of the political labels we choose.  We just have to be willing to listen to each other, and not default to talking points we've heard others spew out of some sense of competition.

And I hold out hope that elections matter.  Despite the obscene amounts of money involved and the backroom dealings and the party agendas, I still believe in the possibility of change based on the voice of the people.  There are many places in the world where that possibility does not exist.  We take too much for granted here.  We don't appreciate how much power we potentially wield with our simple votes.  It's a tremendous thing that the vote of the richest person is weighted the same as the poorest.  That I can choose whomever I want or write in someone else on a ballot with impunity.

That's what America is really about to me.  The freedom to choose a life that suits us.  It will always be complicated living in a society where those different choices impact each other and compromises must be struck in order to keep things running as a whole, but America for the most part is about possibilities.  I believe that.  And I want my children to believe that.

Use your voice.  Go vote.