Quinn requested a peacock cake for his birthday.  Took a bit of work, but I think it came out nice. 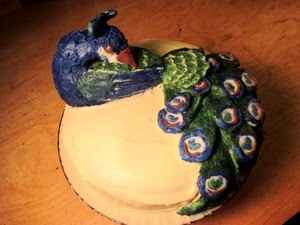 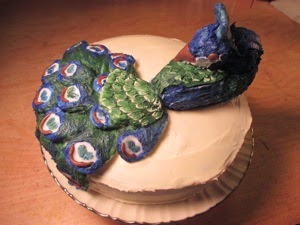 Actually, he originally requested a pigeon birthday cake and a peacock Halloween costume, but remembering back to his grey and black Roomba cake when he was two I told him a peacock cake might be more appetizing and definitely tastier.  He agreed and switched the requests.  (And his pigeon costume came out cute, so I'm glad he did.)

(Here's the Roomba cake if you're curious.  Quinn loved our Roomba and that was his first real word after "Mama.")

I puzzled over how to do a peacock cake for a while.  My first instinct was to make something with the tail raised, but for the tail to look right it would have to be thin, and the proportion of bird to tail would make the actual cake part weird if I made it that way.  And the one preference Quinn had was he wanted the whole thing to be edible (so no purely decorative fan tail).  I asked him if he cared if I made it with the tail down, and he said that would be fine.  I also decided it would be easier if the peacock could simply rest on the cake instead of worrying how to make it out of cake.

There was no room in our fridge at home to store a cake, so I wound up making the basic parts of it at home and bringing it all with me to work so I could put it in the fridge there when I was done.  It was kind of funny to clear off all the violin work from my bench at closing time and play with frosting there instead. 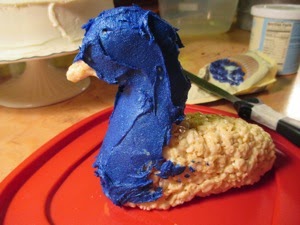 I sculpted a bird body out of rice crispy treats, and made a batch of fondant to do the tail.  I found some great blue glitter frosting at the grocery store, and for a few small details I just used a Tootsie Roll (which is essentially modelling chocolate once you warm it in your hands a little).  The tail pieces I just formed out of the fondant (which is just sugar dough that I have a tasty recipe for).  I wound up applying most of the frosting with a brush which was a lot of fun. 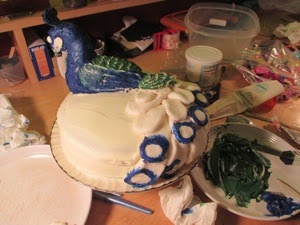 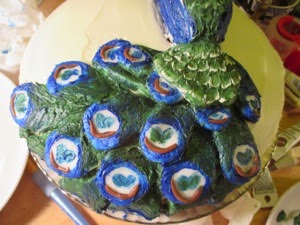 I had problems with the head coming off.  I thought the rice crispy treat material would have some structural integrity if I kept it cold, but I ended up having issues with it getting soft after it was frosted, and I hoped to salvage the situation by propping up the head in the fridge.

However, I had a bad feeling about it after I cleaned up and was leaving the violin store.  I went to check on it one last time and found the neck tearing again, and decided that a decapitated peacock was too depressing for a birthday cake.  I re-carved the neck and positioned the head to rest on its back instead, touched up the frosting, and called it done. 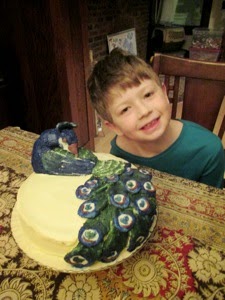 Posted by Korinthia at 5:09 AM