Two down, one to go.  I'm heading into the homestretch of the Halloween costume making.  Quinn's pigeon costume is essentially finished.  And now Aden's snowy owl is done!

I'm glad Aden wanted a costume.  She's worried she's getting too old for it, but I believe you can wear a costume at any age.  People I think get rightly annoyed with teenagers trick-or-treating who just walk around in normal clothes with a bag, but wearing a costume for Halloween is fun at any age, and people appreciate grand displays of imagination.  Why not be a snowy owl for a day?

I started with a basic fleece jumpsuit, but with a wider hood than normal and an extra piece fastened with Velcro across the front of the neck to kind of blend her head into her body more like an owl would be.  I have to say, I am getting fast with the jumpsuits and I make fewer mistakes.  They aren't perfect, but I can trace the kids on the fabric and then pretty much sew the whole thing without them around and just have them try it on again when I finalize the hems, etc.  I used to have to do the whole thing up in safety pins and have them keep putting it on and taking it off and I'd make lots of adjustments.  But after so many years I've got the basics down and can just see it in my head enough to do it on the first try.

Anyway, this was the plain jumpsuit and hood: 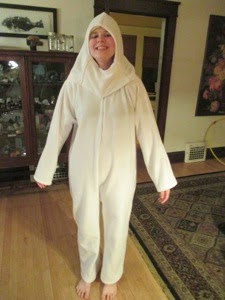 And then I made the wings and tail the same way I did for the pigeon costume, using fleece over cotton batting and creating the shapes of the feathers with the sewing machine. 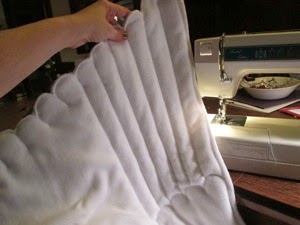 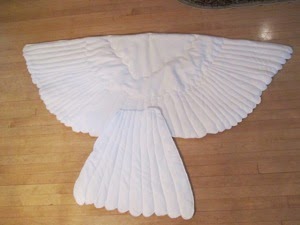 Then it turned from a sewing project into a hot glue gun project.  I cut out a gajillion little black pieces of fleece, and I suppose if I needed this costume to last for the ages I could have turned my life over to hand stitching each one on, but it was faster to just use glue. 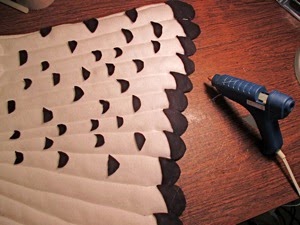 Aden and I agreed to leave the insides of the wings white.  I decided not to sew them to the back of the costume, just to the arms, so she can really swoop around with them impressively.  Here are the mostly finished wings before I hand stitched them to the jumpsuit: 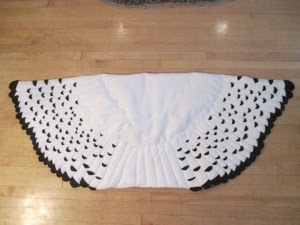 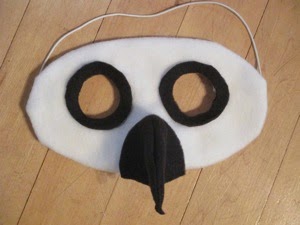 Anyway, the finished costume came out well!  And it's really warm, which is good for Milwaukee in October. 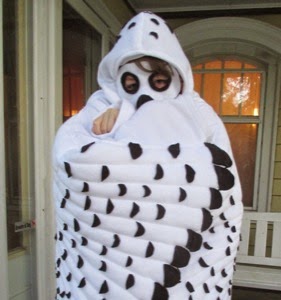 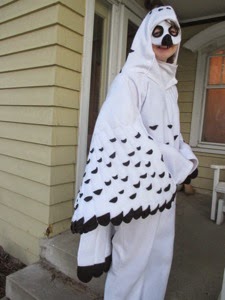 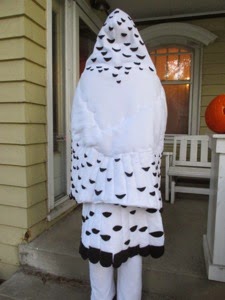 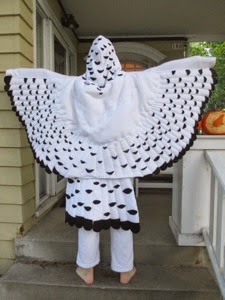 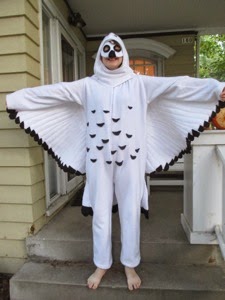 Just the pteranodon left to do for Mona.  (And there is no spelling on Google of pterasaur, pteradon, pteranodon, pterasaurus, terasaur, teranodon, etc. that spell check likes, so I don't know what I'm making or what to call it here.)  I'm a little worried about that last costume because Mona has her hands in this one, and we don't always communicate artistic differences well, so I hope I get it right.  We'll see.  Today I'm just going to start with the jumpsuit.  (That much I know I can do.)
Posted by Korinthia at 11:45 AM