No, I didn't know what that was either.  Definitely one of the most interesting parts of having kids is learning about things you wouldn't have been introduced to otherwise.

A tapejara is a specific kind of flying dinosaur.  Mona was clear she didn't want to be any pterosaur, she wanted to be a tapejara.  And she wanted to help!

I was apprehensive about working with Mona on her costume, not because she's not perfectly capable of making something on her own, but because we don't always communicate on an artistic level very well.  She has her own ideas, and I have mine, and sometimes they mesh, and sometimes they don't.  I'm happy to report it all went well and Mona is very happy with her costume! 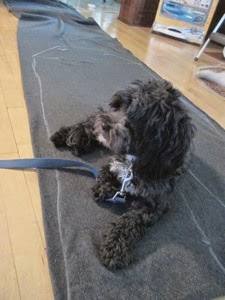 I started with the basic jumpsuit where I traced around Mona on the fabric.  The biggest challenge to my sewing costumes (aside from finding the time) is probably the dog.  Chipper wants to lie on all the fabric all the time, and he doesn't like when I use the sewing machine.  While I sew he begs to sit in my lap, trembling pathetically until I give in and then can't do anything.

After making a basic jumpsuit with a hood I worked on the wings.  Tapejara wings extend past the hands, so I installed extensions with sticks Mona can hold.  When she needs her hands she can just drop the sticks. 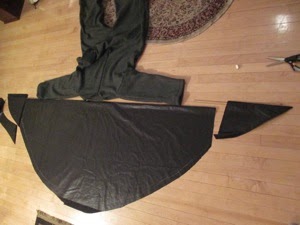 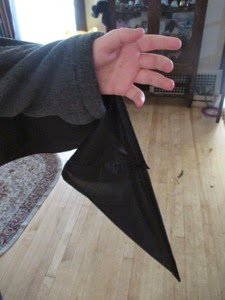 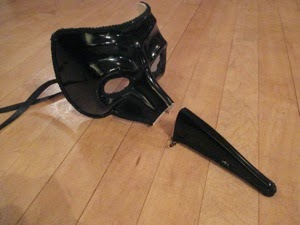 Mona did the headpiece and the mask herself.  We used a couple of masks with long noses, one upright on her head so she could build the crest off the nose, and one where we sawed the nose off so her beak wouldn't be too long. 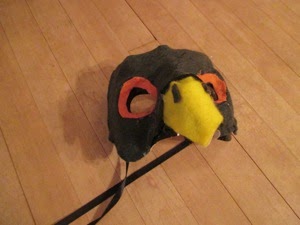 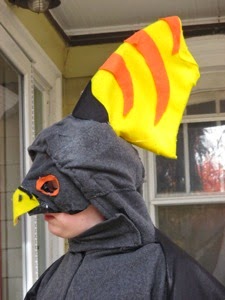 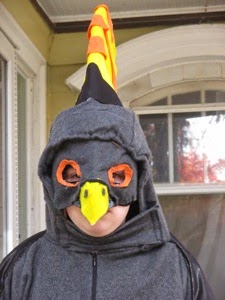 I added flaps of fleece to the headpiece when she was done so I could sew it to the hood.  I also added a Velcro chin strap sort of piece across the neck to help keep the hood in place with all the extra weight on it.  She can't go too wild, but she can pretty much tip her head any direction without the hood coming off.

So we have a finished tapejara costume!  That was fun. 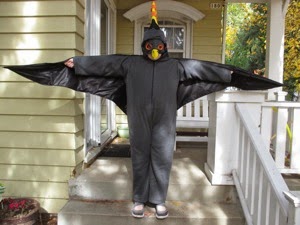 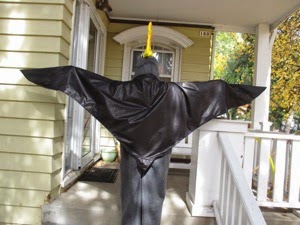 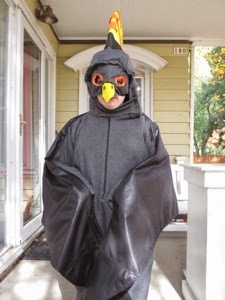 Just in time, too.  There is a Pajama Jamboree concert on Wednesday where they can wear their costumes, the Halloween dance at school on Friday, Trick-or-Treat on Saturday night, and more Trick-or-Treat on Sunday if they want.  I also told the kids that they could also, you know, for kicks, wear their costumes on HALLOWEEN.  (What a concept.)
Posted by Korinthia at 10:26 AM