Quinn asked to be a pigeon for Halloween this year.

That may seem mundane to many, but to my kids pigeons are exotic.  In Milwaukee we have seagulls, which apparently eat pigeons, so what few pigeons we have congregate in minor numbers under bridges here and there.  One of the great joys of visiting New York when we go is seeing so many pigeons and my children adore them.  So when Quinn asked to be a pigeon I could see the appeal.  (And yes, he's already been told by several people he will not get to drive the bus.)

I felt up to a pigeon challenge!


Now, I've been told by many readers they look forward to seeing my kids' costumes each year.  I find that really flattering considering my approach to sewing is haphazard.  I don't really know what I'm doing.  I approach sewing like fabric sculpture and it seems to work out.  I want to disabuse anyone of the notion that I am operating in some sort of Pinterest perfect world of magical creation because my house looks like disaster zone this time of year.  This is my dining room table right now: 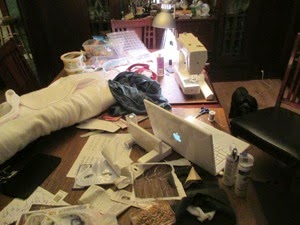 (Complete with laptop set to Netflix for viewing of The Walking Dead or Gilmore Girls depending on if children are looking over my shoulder.)

Anyway, on to the pigeon costume!  I started with a basic jumpsuit in light grey fleece and added a dark grey hood.  I mostly learned that Quinn is way taller than I'm ready for him to be, and next year we need a longer zipper.

Then I worked on the wings: 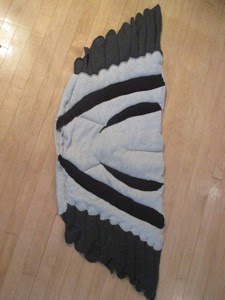 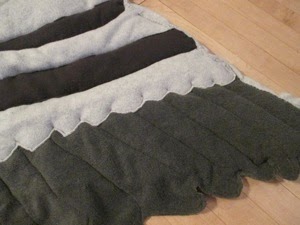 I used cotton batting inside them to give them a little form, and just wrapped that in fleece and used the sewing machine to define the feathers.  My best idea was when doing the light grey edge along the dark grey section was to sew it first and cut it out afterward.  That way it matched on both the front and the back and I didn't have to worry about lining anything up.

I did the tail kind of the same way, but I made the feather tips individually because I didn't want them to line up too evenly so they would look more like separate feathers. 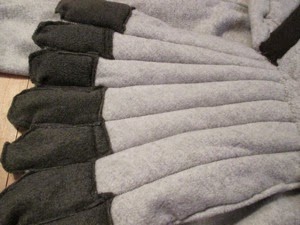 For the mask I just hot glued fleece to a basic mask form and taped on a cardboard beak and covered that with duct tape.  The operculum (the lumpy thing at the base of the beak--thanks Google!) I made out of model magic and just glued it on.  (Model magic is not very durable, but it's really light and is handy for adding odd bits to costumes.) 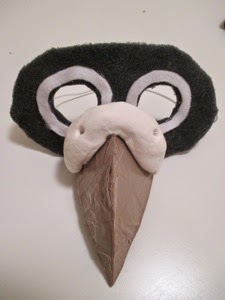 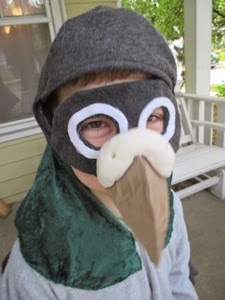 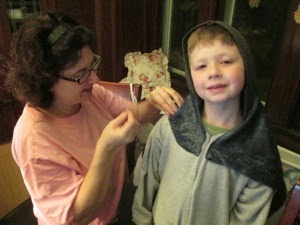 I think the main reason Quinn wanted to be a pigeon (besides having wings) was he liked the green and purple iridescent bits on the neck.  We found a good green velvety fabric for most of that, but we still need to add a touch of purple.  We experimented with some purple fabric paint but it looked bad over the green.  I nearly have Quinn convinced to just let me used purple glitter glue in a few spots, which I think will look nice, but Quinn isn't sold yet.  We have a few weeks for him to think about it.  The whole hood addition had to be sewn on by hand and Aden kept her brother looking the right direction by playing select YouTube videos while I (carefully) stitched. 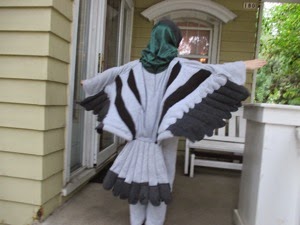 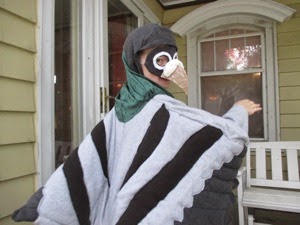 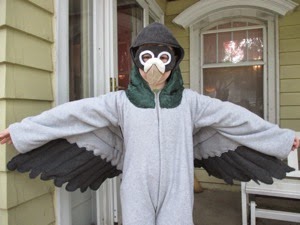 I think he makes a cute little pigeon!  And I'm hoping I did a good enough job people will know what he is.

Next up:  Snowy owl.  (That bolt of white fleece on the table in that first picture?  That is as far as the snowy owl has gotten as of yet.  It's going to be a long weekend.)

Posted by Korinthia at 4:21 PM