After Knoxville, and a night in the southern end of Georgia, we headed on to the Orlando area part of our Mold-A-Rama Road Trip where we had three stops to make. 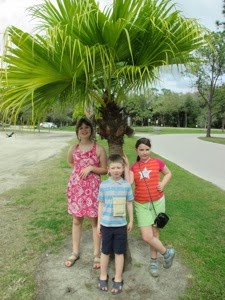 Our first stop in Florida (after the Visitor Center and its free orange juice) was the Central Florida Zoo in Sanford.  It's got to be hard to be any kind of small attraction near Orlando, and it's a very small zoo, but we liked it.  It will always hold a special place in our hearts for being the first place where we touched a palm tree, and for giving us our first moments of real warmth during a truly miserable winter.

The zoo was small enough that nearly every animal in it was pictured on the map, and the only large animal they had was a rhino.  They were getting ready to open a giraffe exhibit, and we actually saw the trailer pulling up with the giraffe delivery as we were leaving!  They had the smallest amphibian display we've ever seen.  There was a tiny building with a door, and when we opened it we realized that little space with a wall with four or five tiny windows in it was the whole thing.  It was like a mini-zoo, but everything was nicely displayed and well-maintained.  All of it was built on boardwalks, and there were covered areas strewn about to hide from the sporadic rainstorms.

We also saw this on our way into the park which we found interesting: 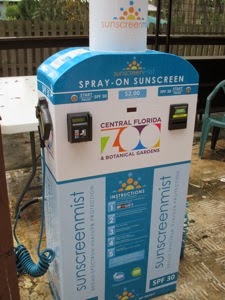 It's a spray-on sunscreen dispenser!  We stocked up on sunscreen before we left Milwaukee, otherwise we would have tried it.

The zoo gave us half off admission with our reciprocal membership to the Milwaukee County Zoo, and they had a large outdoor ropes course that I didn't feel like splurging for while we were there, but it looked fun.  The kids were understanding about that because Central Florida Zoo was one of our "Zip Through" locations.  There were so many places to hit on our list that we went through them all before we left and decided each of us could pick one location as our own to decide for the family how long we would spend there.  The rest we would play by ear and spend extra time if inspired, but otherwise would "zip through" for the Mold-A-Ramas.

The Mold-A-Ramas at the Central Florida Zoo were a lot more successful than Knoxville.  (Which isn't saying much, but hey.)  There were five machines there, and the one that wasn't working (the monkeys) we were able to pick up the figure for at guest services. 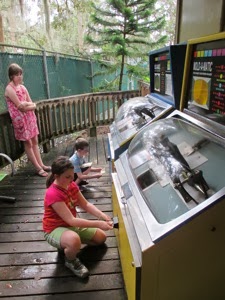 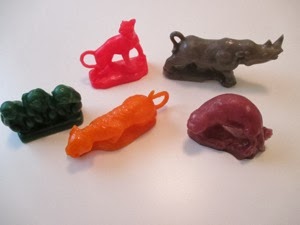 A nice first stop in Florida. 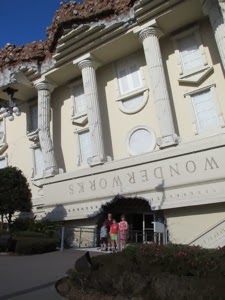 On from there to Wonderworks!  A crazy "upside down" building.

It reminded us most of Tommy Bartlett's Robot World in The Dells here in Wisconsin.  It's packed with crazy things that attempt to cross over into sensationalized learning.  You can experience simulated earthquake tremors or hurricane level winds.  There is dripping water with a strobe light on it so it looks like it's falling upwards.

Admission was pricey (about $100 for five of us, no discounts for AAA or military) and dinner was meager and overpriced, but we had a good time.  On the top floor (labeled "the basement") was a ropes course up by the ceiling that Mona and Ian did together (that was Mona's favorite part) and a 4-D movie which didn't make any sense but was an experience of sorts.  There was also a typical Chuck E Cheese kind of setup with games and tokens where you win tickets and trade them in for a dime's worth of prices.  Aden treated herself and Quinn to that while Mona was on the ropes course.

I enjoyed shooting baskets with the timed basketball game, Aden loved the virtual air hockey table that worked using shadows, and everyone loved the bubble room.  We spent a long time in there watching the kids make bubbles inside other bubbles and work at building giant bubbles around each other. 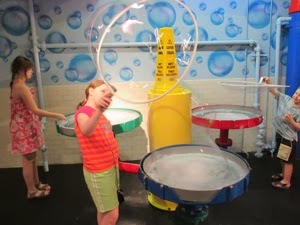 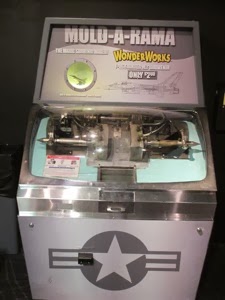 Wonderworks in Orlando has one Mold-a-Rama machine.  It's in perfect, gleaming condition, and it makes a silver fighter jet.  (Quinn got one for his personal collection but the tail broke off before we got home, so he's decided it looks like it's been in a fight. 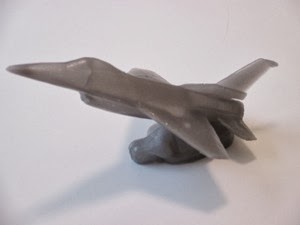 On our way out of Wonderworks there was a man raising money for some kind of alligator research/shelter/education/something, and for a donation you could hold a small alligator (with its mouth taped shut).  The kids were willing to pay for that themselves but I decided to treat. 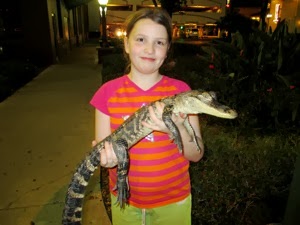 Which makes a good segue into Gatorland, which we did the whole next day.

I have no pictures of Gatorland.  Which is ridiculous because we loved it and spent more than five hours there and I probably took more pictures at that location than anywhere on our trip, but the new camera card I bought that morning to use was apparently corrupted and I got nuthin'.  Not a single photo!  So let me paint for you pictures with words....

Big gators, little gators, birds standing on gators, lots and lots of gators.  (My way with words is daazzling, I know.)

But really, it was fun.  I didn't expect to like it.  I thought it would be hokey and make me feel sorry for the animals.  But we learned a lot there and had an amazing time.  And this was Quinn's chosen stop, so we stayed until he was done, and we congratulated him on picking such an excellent location to spend the day.

The attraction predates Disney World and was apparently aimed at local visitors back in the day.  There is a giant alligator mouth to walk through at the entrance, and the first thing you see when you get inside is a pool filled with small alligators draped all over one another looking content.  Then there is a pool of larger alligators.  Then a giant pool with huge alligators that they do different feeding shows with that also manages to attract vultures who know the feeding times and try to snag some meat for themselves. The gator wrestling was pretty amazing.  Watching someone hoist an alligator by the tail out of a pool and not get bitten is really something.

We learned a new word at Gatorland:  Leucism.  They have four leucistic alligators on display that are white (or mostly white) with blue eyes.  The difference between leucism and albinism is that leucistic animals have a genetic difference in pigment that makes them white but they are healthy, whereas albinism involves the reduction of melanin production and is usually accompanied by other health issues.  Who knew?  So now I'm wondering about any number of animals I've seen over the years that I thought were albino that may have instead been leucistic.

I was surprised at how many other animals we also got to see at Gatorland, including panthers, tortoises, snakes, and many birds.  We saw a good show about exotic creatures, and everything at Gatorland was geared toward being entertaining while also trying to educate.  They struck a good balance between folksy and accessible and informative.  In terms of pure fun they had their own budgie room where you could buy seed sticks to feed the birds.  The budgie exhibit in Knoxville was a bit more wild and the birds more cautious.  In this one the birds were not shy at all!  The kids went in for two separate feeding times and spent their own money they loved it so much.  We also got to feed corn to emus, and we bought hot dogs that we tried to toss to alligators, but we wound up mostly feeding aggressive egrets and ibises.

The most unexpected part of Gatorland for us was the swamp walks.  They had two large areas of preserved swampland with walkways running through them and informative signs to help identify birds and plants.  The first walk was dense and shaded, and we spotted a wild otter ducking in and out under the boardwalk.  The second walk was a path around a very large pond with observation towers you could climb and look down from.  We spotted a huge turtle swimming among the gators, and we got to watch great egrets making nests.

On our way out of Gatorland we visited what was being touted as their "award winning gift shop" (who knew gift shops got awards?) where I bought a tiny ceramic alligator to keep me company at work.  Gatorland cost us around $100 for five (along with a small military discount) and it was well worth it.  Easily one of our most memorable stops on the whole trip, and not a place we ever would have sought out if not for the Mold-A-Rama hunt.

Gatorland has two Mold-A-Ramas: A man wrestling a gator, and a white (leucistic!) gator. 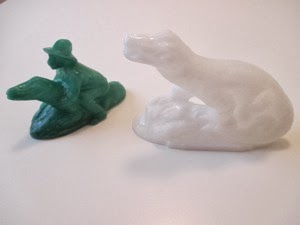 They were two dollars each and the machines worked just fine.

Next stop:  Miami
Posted by Korinthia at 9:58 AM