We just got back from a trip to Florida!
I really needed it, and I'm so glad we went.  Normally I'm fine with winter, but this one has been so oppressively cold and miserable that it kind of broke me.  It was lovely to shed our coats and boots and walk barefoot in the sand even for just a little while.

We've never taken a family vacation that wasn't specifically about seeing relatives before.  This was a purely decadent family fun adventure.  The first two weeks of February aren't an unusually busy time for our store, I didn't have any big rehearsals, the kids weren't doing anything pressing, so Ian and I found people to sub for us in our jobs, we put the dog in a kennel, pulled the kids out of school, and headed south! 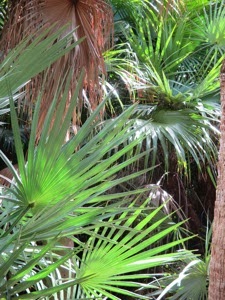 None of us had ever been to Florida, and that's where most of the Mold-A-Ramas are according to our online sources, so we decided to do a Mold-A-Rama Road Trip.  We hit the Knoxville Zoo in Tennessee for Mold-A-Ramas on our way down, and another 13 places all over Florida to add a total of 59 more figures to our collection.  It was great fun, and regular readers should brace themselves for an onslaught of Mold-A-Rama posts very soon because I need to do that in order to document it all for our family before I forget everything.

However, the non-Mold-A-Rama based parts of the trip are also worth noting!

First and foremost, I have to say, my kids are great to travel with.  I know I've written about that before, but a trip like this really tests a lot of limits, and I am truly impressed with how good they were.  On the straight shot home, with breaks only for gas and restrooms where we left Florida in the morning and didn't reach Milwaukee seven states away until long past midnight, they were great.  Even after a couple of the electronic things they brought along to amuse themselves broke they were fine.  They make up little games, they sing, they laugh, we read (got through most of "Around the World in 80 Days").  Most of the time they are so quiet we almost forget they are there.  I don't know why they don't whine or get bored, but I'm grateful, because it opens up lots of possibilities when you can take your kids anywhere.

They are good when we get places, too.  I get angry when I hear of restaurants with "no children" policies simply because other people believe all children will be annoying.  I think that kind of age discrimination is wrong because my kids are just fine, and far less annoying than many adults on cell phones.  Go ahead and have a noise or behavior policy but apply it to everyone.  Anyway, people approached me throughout the trip just to tell me how well behaved my children were.  I don't claim to take much credit for it, but it's nice to hear.

The first exciting part of our trip was leaving most of the snow behind.

The second was putting our minivan through a car wash in Kentucky to remove all the salt from it.  (That was fun because the kids got to ride inside and Ian and I watched from an observation area.  Yes, we are easily entertained.)

Then we arrived in Knoxville where it was cold and rainy and we still needed our coats, but any temperature in the positive numbers felt like a victory and we were happy.

On our way out of Tennessee we stopped in the Great Smokey Mountains.  There is a lot of crazy tourist stuff just outside the park in Pigeon Forge (putt-putt courses with giant dragons and boats, moccasins and fudge, shops and lights...and Mona declared love for all of it).  Then you pass over the invisible line into the park and it's peaceful and beautiful.  Our only problem in the Smokies was that Aden's ears hurt terribly going up and down the mountains, but even she admitted it was worth it. 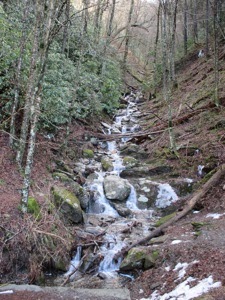 After standing on the border of Tennessee and North Carolina we forged ahead, drove through Georgia forever, and after a couple of Mold-A-Rama stops ended up at the home of a friend of mine from high school.  He works for Disney and has told me for years that if we ever found our way to Orlando he'd put us up and get us into the park.  When I asked if that offer was still good he said it certainly was, and we had two lovely nights in his home.  Disney World is not actually a place I would likely ever pay to visit, but for free?  It was great.  We spent the day at the Magic Kingdom section of the park and did the Hall of Presidents, Teacups, Go Carts (twice--the kids were crazy about it), Pirates of the Caribbean, Haunted Mansion, Carousel of Progress, Buzz Lightyear, and Space Mountain.  We had a blast.


But the best part was finally getting to meet my friend's husband and two sons.  It's one thing to be in touch with faraway friends on social media or with the occasional phone call, but another entirely to see where they live and hear their kids laugh.  It was truly wonderful and I'm so glad it worked out. 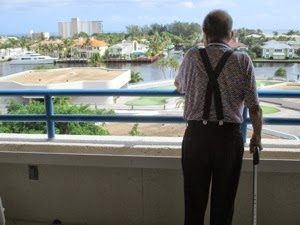 After Orlando we headed south toward Miami, and on the way stopped for lunch with my Uncle Harold and Aunt Lila.  Harold is my dad's only brother and I hadn't seen him since my wedding.  It was such a great thing to have them finally meet our kids after a dozen years of just seeing them in photos.  I think the most touching thing for me on the whole trip was the way my Aunt Lila took each of our faces in her hands so she could really look at us.  My kids loved her.  That whole stop in Del Ray Beach was extremely meaningful to me and one of the highlights of our time in Florida.

We spent time on the beach in Ft Lauderdale and played in the ocean until the sun went down. 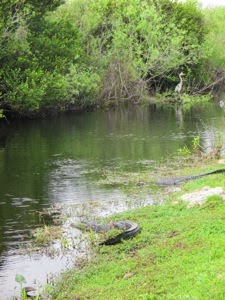 Miami was gloriously wonderfully fabulously warm.  We spent two nights there, and on our way up toward Sarasota we stopped in the Everglades.  How insane to see wild alligators with no barricades!  We watched one catch a fish in front of us and listened to it crunch its bones.  On our drive along the park edge and through state preserves we saw hundreds upon hundreds of alligators.  We saw so many alligators the kids got bored with them.  (That's a lot of gators.) 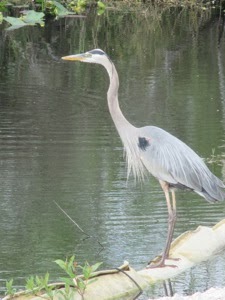 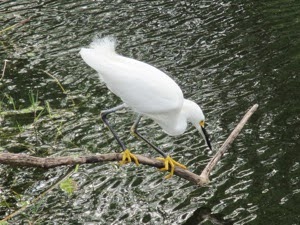 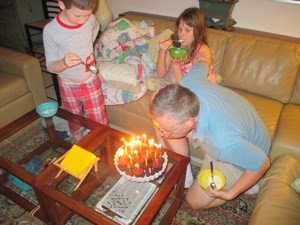 I'd mentioned to a good friend of my mom's in Sarasota that we would be in their area and she offered to put us up.  We stayed three nights, and we felt so welcomed and cared for, which is a lovely thing on a trip where you wind up mostly living out of your car.  We arrived on the evening of Ian's birthday to not just a delicious home-cooked meal, but a tray of brownies with candles and ice cream on the side.  Aden and I even got to watch Downton Abbey while we were there, so it was like a snuggly moment of home within a vacation.  I'm sure our agenda looked pretty hectic and packed to our hosts while we were there, but that portion of our time in Florida felt the most settled to me.  I loved it and I'm so appreciative of the kindness we were shown.


Before we left Sarasota we spent several hours on Siesta Key Beach, which had perfect sand and many shells.  Quinn kept finding broken sand dollars which we referred to as sand dimes and quarters.  All the kids brought home some sand in tiny jars. 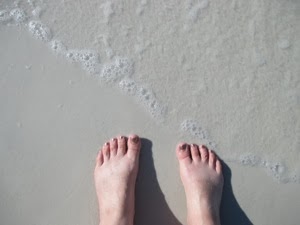 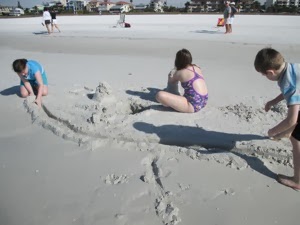 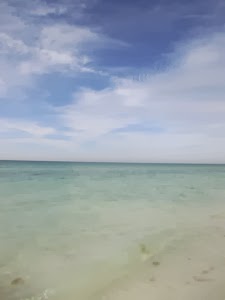 The drive home was complicated slightly by rainstorms and trying to avoid the ice disasters in Georgia, but we spent the night in a hotel on the northern edge of Florida to play it safe, then drove home toward the snow.  It's been painful re-acclimating to the cold, but it's still good to be home.  We missed our beds and our Great Lakes tap water and our silly dog (who was VERY happy to see us again).  But now we also miss palm trees. We really couldn't have asked for a better trip.  I have no amusing stories to share about car breakdowns or accidents, no one was sick or hurt, and everything worked out well.  I loved having so much time with my family.  I'd been feeling like I never saw anyone anymore, between rehearsals and school and work, etc.  I needed to uproot us all and have us spend real time together, and I got that.  Making memories while being warm.  Florida was amazing.  We may have to find a way back someday.
Posted by Korinthia at 12:03 AM