I come from a family of collectors.  I have most certainly passed that gene along to my children.  (My husband, poor man, is surrounded by other people's "precious" things, but at least we are unlikely to move again anytime in the foreseeable future, so he won't have to suffer lifting endless boxes of books and rocks.  Every time we've moved books he's paused to show me how light his library card is.)  There is something satisfying about filling in gaps in a collection, and something oddly comforting about seeing evidence of experiences you've had all lined up on a shelf.
Our Mold-A-Rama collection is the first one we've tried to do as a family and it's been incredibly fun.  Mold-A-Rama figures are not expensive, they're silly, they are just rare enough to be exciting, and best of all the pursuit of them has taken us to interesting places we otherwise would have never gone.

Which brings us to our trip to Florida.

When we first looked at the map of places one can find Mold-A-Ramas we essentially wrote off most of them as impossible.  We would collect what we could in the Midwest, and maybe eventually hit the one location out on the West Coast on a visit to relatives that direction, but anywhere in the South?  Why would we go there?

But then we began to think, why not go there?

It sparked an idea.  An idea that led us to escape the brutal Wisconsin winter for a couple of weeks and enjoy some wonderful time together.  We weren't sure we could hit everything on our list, but we aimed to try, and we succeeded!  Two places were closed this time of year (Adventure Island in Tampa supposedly has one Mold-A-Rama machine, and some kind of Microcar Museum in Georgia we think has four), but everything else we knew of that was open we got to.  Our list included:

We enjoyed everyplace we went, and if we weren't on our little quest I doubt we would have gone to any of them.  We learned a lot, we got to explore new things together, and we got a much needed break from our regular routine.  Our kids were unhappy with the idea of missing school, but a trip like this they will remember forever.  Too many of our days are forgettable.  I wanted to carve out a few for us that were anything but.

The first thing we packed for our collecting journey was a large cooler that Ian and I have always referred to as "the dog."  It was a gift from a friend back in college, and until this trip we've never used it.  It's bulky, but seems like it should be useful, so we have moved with it from state to state where it would sit in storage like a trusty companion waiting for action.  A former Floridian suggested we might want to store the Mold-A-Ramas we collected in a cool container, lest they all melt in the car one afternoon.  After twenty years "the dog" was finally getting used!

The next thing we packed was our giant bag of change, but I also decided to swing by the bank and get a stack of dollar bills just in case.  Very glad we did!  There are a couple of types of Mold-A-Rama machines, and the ones up in our part of the country take both coins and bills and give change.  Turns out the ones in the South only take bills and do not give change, so we went through all our bills.

The different styles of machines are both from the 1960s and in different regions are run by different companies.  (The history of the Mold-A-Rama machines and name can be found on the official Mold-A-Rama website, as well as various collector sites.)  We like them both, but have a particular fondness for the ones in our own state.

The cost of a Mold-A-Rama figure is $2 everywhere, with the exception of the Knoxville Zoo where they were only $1 (the people who worked there assured us nobody in the area would pay more than that) and Busch Gardens where they were $3 (because hey, when you're prepared to spend a fortune for a day at an amusement park $3 seems cheap).  Most places have pre-made figures available at the service desk in case a machine eats your money or the figure is deformed in some way, but nobody outright sells Mold-A-Ramas.  You have to get them yourself at the machines.

Which is where the fun is!  There is something particularly helpful, too, when you step into a zoo or science center with kids to have a mission.  The hunt for Mold-A-Rama machines gave us focus and created a timeline of sorts that I think kept us more sane than a trip with such a packed agenda could otherwise manage.  We got to enjoy the parks and the sights, but keeping an eye out for the next machine gave us direction, and when we had collected all of the figures from a particular place that was a reasonable signal of a good time to leave. 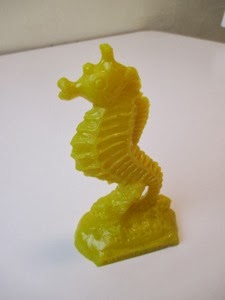 It's satisfying to hold each little figure in your hands and remember it being made and where it came from (we mark them all on the bottom so we don't forget).  The kids can give quite a grand tour not only of the family collection, but of their own individual collections.  Every once in a while there is a Mold-A-Rama that is unique or interesting enough they want one for themselves, so they break out their own money.  For instance, we have many rhinos and waving gorillas, but only one seahorse, so Mona got one of those for herself, too.

There are about half a dozen places left on our list.  A couple of them shouldn't be hard to get to.  A couple will take effort but will be exciting to accomplish someday.  (The kids want to see the Grand Canyon in the future, so we're already planning to swing by the San Antonio Zoo as part of that adventure.)  Regardless of whether we ever add another figure to the mantle the family Mold-A-Rama collection is impressive!  We more than doubled the number of figures we had with our Mold-A-Rama Road Trip. 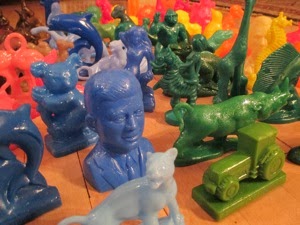 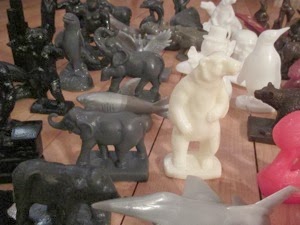