We are nearing the end of this journey, I swear!  But not quite yet.

Next on our Mold-A-Rama Road Trip (after Knoxville, Orlando, and Miami) we hit Sarasota and Tampa.  We were lucky enough to stay with friends in Sarasota for three nights and commute to the places we wanted to visit.

The first place we tried to go was the Mote Aquarium, which was only a few miles from where we were staying, but I got mixed up about the times and we were there an hour early.  We asked the kids if they wanted to wait, or wanted to head somewhere else.  They surprised me by asking if they could get back in the car and watch a movie.  I was sure they'd want to be anywhere but the car at that point, but I didn't mind the idea of taking a walk and then reading for a bit if the kids wanted to curl up together and watch Spirited Away again.  However, the DVD player had other ideas and started spewing smoke (?!) so Ian and I declared it was time to roll. 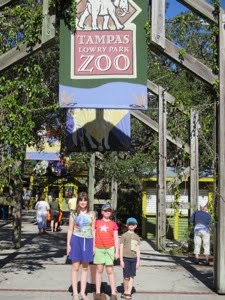 We headed for the Lowry Park Zoo. (I think it was half off with our reciprocal zoo membership if I'm remembering right.)

It's a pleasant zoo.  It was one of our "zip through" locations so we didn't spend a huge amount of time there, but we did see a good raptor show that included trained chickens and an owl that flew over our heads.  We learned that whenever you hear a bald eagle on TV or in the movies doing a big cawing-screech sound it's really a red-tailed hawk call dubbed in.  Bald eagles make a cute little chirpy noise, but that's not as impressive in a big patriotic moment.  Another thing we learned was that great horned owls have no sense of smell so they eat skunks.

We also saw a clouded leopard, and we bought some overpriced popcorn that came in a bucket that has turned out to be incredibly handy for carrying snacks. 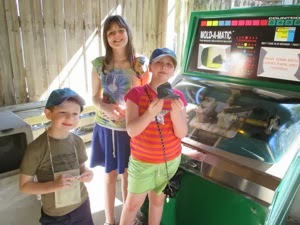 Lowry Park Zoo has eight Mold-A-Rama machines, and they are all in perfect condition.  Took some effort to find them all, but it's another zoo that's essentially a loop so as long as we just kept following the path we figured we'd run across them all eventually.  A couple were tucked off into funny places though!  Before we left the zoo I showed the desk all the ones we had just to make sure we didn't miss anything.

Our favorite was the purple koala, although it was exciting to get a stingray since that was new, (it just wasn't a particularly good figure).  The giraffes everywhere are usually red.  Isn't that odd?  We agreed we would probably make them yellow.  It's also weird how often the rhinos are green.  But hey, all of the machines worked so we aren't complaining. 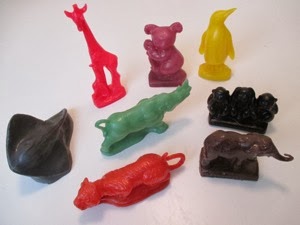 Not too far from the zoo was the Museum of Science and Industry.  This was also a "zip through," and honestly at this point in the trip the kids were getting a little worn out.  The laptop they'd brought was retired for repair after only a couple of days on the road and they were going through a bit of computer withdrawal.  MOSI is large with a lot to see, but the girls immediately gravitated toward a hands on area that had some sort of construction and LEGO theme, and that included a giant screen with some kind of LEGO Batman video game.  Mona and Aden settled in to play and stayed there the whole hour or so we were at the museum.  It made them happy so that's fine. 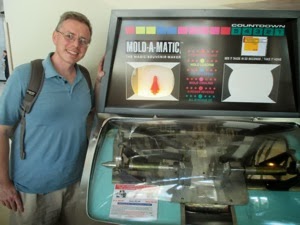 Ian helped us spot the first machine.  It was weirdly placed under some stairs and behind a wall near some storage bins.  It was really strange, and I'm still surprised we found it.  But it was a cool one!  A Mercury Space Capsule!

Then Ian kept an eye on the girls while Quinn and I went out to search in a different building of stuff specifically for kids.  We quickly found a machine with a T-Rex!  Then we hung out and tried some of the neat displays and set up dominoes to knock over and did some puzzles.  We asked around until someone suggested we try the lobby of the IMAX theater for another machine, and sure enough!  A Space Shuttle on a launch pad!  A very successful Mold-A-Rama stop.  We then gathered up the girls and headed out. 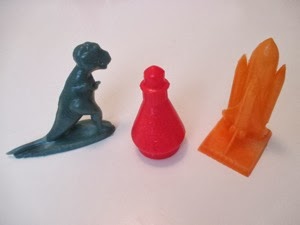 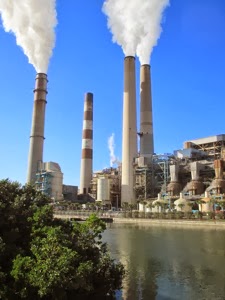 Our last stop on our way back to Sarasota was the TECO Manatee Viewing Center.  The outflow of water from the Tampa power company is warm enough to attract manatees, so they have a free viewing area (along with a learning area, snack bar, and gift shop).  It's a really good idea on many levels.  It's amazing to get to see so many wild manatees in one place, and it creates a positive association with the smokestacks (which can't hurt the power company's image). 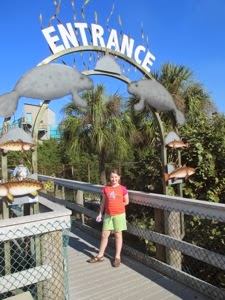 This was Aden's chosen location so we were there for a while.  Aden is my lingerer.  Mona is pretty efficient when she checks out new places and doesn't feel the need to spend extra time.  Quinn will do whatever the majority wants to do.

But Aden wants to stay.  She's always the last one out of any room in any museum, and frequently we have to go back to the beginning of somewhere to go find her and hurry her along before we have to go.  Aden really sees things, though.  When other people see a sleeping panther at the zoo and move on, she waits and watches, and tells me later about the way its ears twitched, or how it changed position or stretched or how when it yawned you could see all of its teeth.

So we stayed about two hours, which is a long time to look at manatees just floating about, but it made Aden so happy not to be rushed. 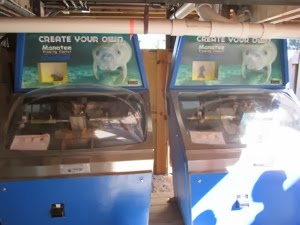 The TECO Manatee Viewing Center has two Mold-A-Rama machines tucked away in an unsightly location with pipes overhead.  One was a "Flipper" dolphin (like the kind from the Flipper show at Seaquarium) and the other was, of course, a manatee.  (Although the kids and I thought it would be really funny if they had those same three monkeys again, or another waving gorilla.  We have an impressive number of both of those.) 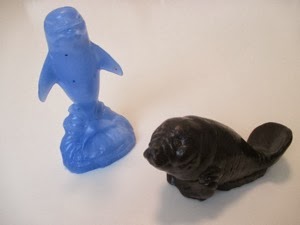 Quite a packed day!  Three Mold-A-Rama locations between 10 and 5 is a new record for us.

After all of that we were treated to a lovely dinner by our friends at the condo and the kids played in the pool and we got some much needed rest.

Next up:  Busch Gardens and the Mote Aquarium.
Posted by Korinthia at 6:47 AM