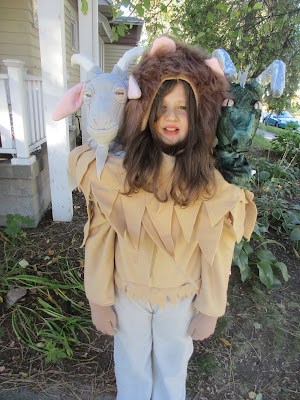 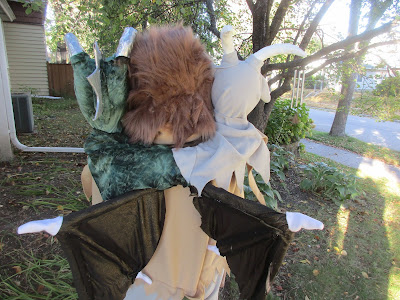 Quinn has been selecting Halloween costumes based on checking different categories off a list: mammal, reptile, arthropod, bird, fish, etc.  Among the remaining categories he was contemplating this year were amphibian and mythical creature, and he finally settled on mythical creature, specifically a Chimera.

Now, I knew a Chimera was a mash-up of different animals from Greek mythology, but honestly didn't remember (if I ever knew) the specifics.  Being imaginary, the details vary depending on the source you use, but after looking online, Quinn settled on: goat legs for the lower half, lion on top, a snake for a tail, wings, and the heads of a goat, lion, and dragon.

So this was kind of like making several costumes.  I'm just glad he decided on it early so I could start it back in September.

I began by making the extra heads and figured I'd find a way to mount them later.  We picked up simple Styrofoam heads at the craft store and I added to them with wire, aluminum foil, tape, and paper mache.  I did the goat first.  I just covered the head with fleece and added eyes I made from pieces of glass with paper I colored underneath.  I was really pleased with my goat! 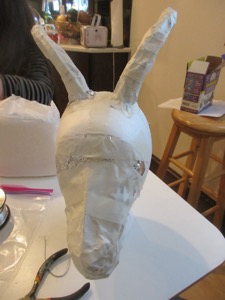 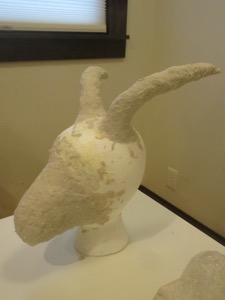 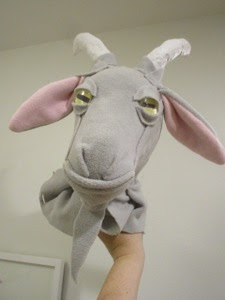 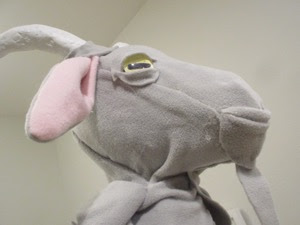 Then I worked on the dragon.  That was trickier, but I think it came out okay.  It was one of those projects where I know if I'd had longer and could spend real time rather than just dabbling with it after work at night I could have done something really cool.  Maybe something with a moving jaw and teeth....  Anyway, dragon: 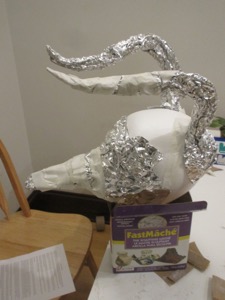 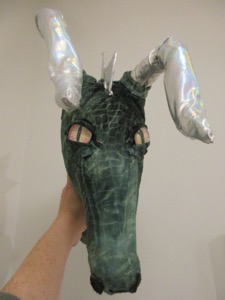 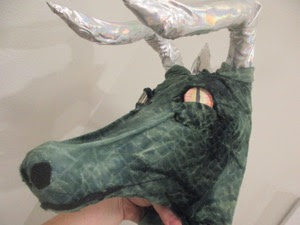 I mounted both heads on a thin piece of plywood with a hole cut in the middle for Quinn's head, and covered all that in fleece to match the body.  I had to add elastic straps under it to fit his arms through to stabilize it. 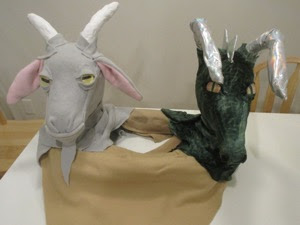 Quinn's lion mane is just a pull-over hood with some of his own hair thrown in for good measure. 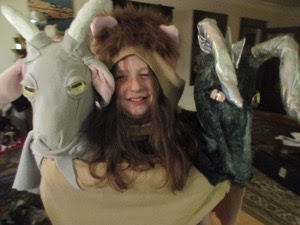 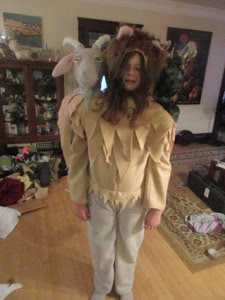 Basic jumpsuit with grey on the bottom for the goat, brown on the top for the lion, and at the back is a snake tail with a wire in it so it can be bent any way he wants. 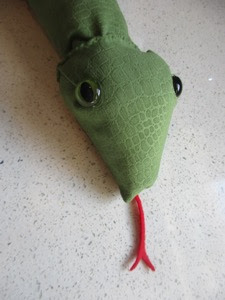 The wings were the hardest part of this for me, and I'm not totally satisfied with them, but Quinn likes them so that's all that matters.  I mounted them on the underside of the same platform the heads are on so Quinn can put all of that on at once. 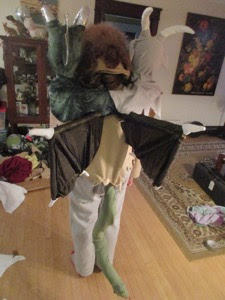 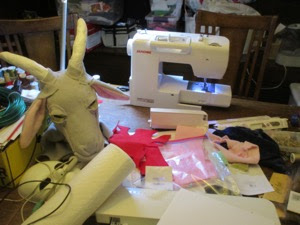 This may have been the messiest Halloween costume season yet.  Mona's bits and pieces of all her costume work took over half the living room, and the dining room was a new level of cluttered.

The best part this year, though, was that over the summer we got a new sewing machine.  Our old Janome that I bought before Aden was born was starting to become more of a hindrance than a help, and when we took it in to see what it would cost to repair we decided to see what the new machines were like.  They showed us the new version of our Janome, now computerized.  Mona and I were both sold at the automatic needle threader.  And there was the automatic knotter, and cutter, and the drop in bobbin, and the crazy good button hole foot, and all the different stitches....  (You don't even need to use a foot pedal anymore if you don't want to, but Mona and I decided to stick with it anyway since we're both so used to it.)  They were having a sale where we could get an amazing discount on the floor model so we just took it home that day.  Sewing everything this year has been so much easier and fun.

So Chimera was a good challenge!  (I guess next year we figure out an amphibian.) 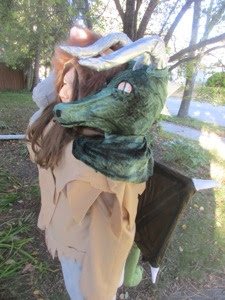 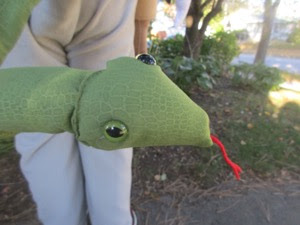 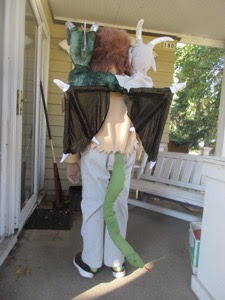 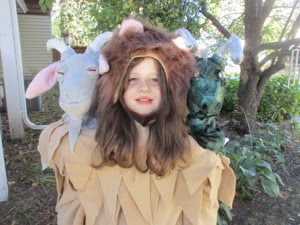