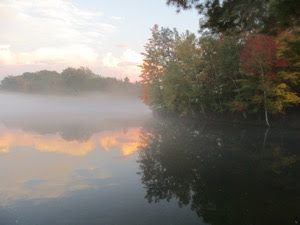 Last week I got to use our cottage in Michigan as a mini-writing-retreat.

I went with a talented writer friend who helped me salvage my first novel a few years ago, and she agreed to help with the second if I would keep her on task with writing her own book.  We had five straight days (plus two chatty driving days) of writing.  For the most part no internet, no schedule, no news, no responsibilities.  There were a couple of trips to the library, a few trips to pick up food, and some lovely walks here and there, but more or less we stayed in the house and wrote without interruption.

I can't emphasize enough how much I needed this.

Because pleasant as it was to be unplugged and free of my daily life for a while, it wasn't a vacation.  It was productive in a way I don't experience often enough for the kinds of things I want to do.

Over a decade ago I decided to try my hand at writing fiction simply to see what it was like.  It turned out to be incredibly fun.  I cranked out drafts for three novels in a relatively short period of time, and then my husband got deployed, and that was the end of that for a while.  I didn't have any way to think for proper stretches in order to do anything quite like that for a long time.

Five years later (when all three children were old enough to not need me every moment and my business was solidly up and running) I turned toward those books again, and with my friend's help I was able to get through a finished draft of my first one and self-publish it.  (Available here for anyone who hasn't read it!)  My goal was to do the same with the next two novels (maybe one a year) and then finally start working on drafts of the outlines for a few other books I have in my head.  But life intrudes.

And the thing is, it's not like I ever felt like I was putting it off.  Each day simply slips by.  It's insidious.  I would go to bed at the end of another day of trying to juggle so many things and think, "Well, today there wasn't time, but soon."  The days turned into weeks turned into months turned into years, and I finally decided I can't.  I can't keep waiting because the time will never come.  Writing for fun will never come before doing things with my family or work or practicing or chores.  But it's still something I want to do, so I either do it or I don't.

This year I made up my mind to buckle down and finish the second novel or throw it out, so the mini-writing-retreat was born.

After a week of heavy editing and rewriting and lots of constructive criticism I think I finally have a book instead of a rambling outline.  It's an exciting feeling.  It's a feeling I definitely want again, so I won't go so long before the next retreat.

I wish it weren't so hard to carve out that kind of time, but it's worth it.  I want to get to the end of my life with something to show for it other than having kept the kitchen counters wiped down most of the time.  This week?  I have a manuscript.

Life, barring disaster, is what we make it.  This week I made it good.