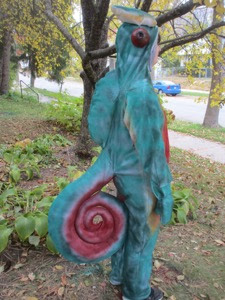 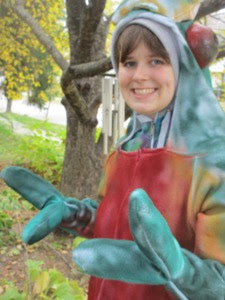 In recent years Aden has waited until only a week or two before Trick-or-Treat before deciding on a Halloween costume.  She likes being a kangaroo, and can always happily fall back on that, but luckily when she has a last moment inspiration we've been able to put it together in time.  This year she wanted to be a chameleon. 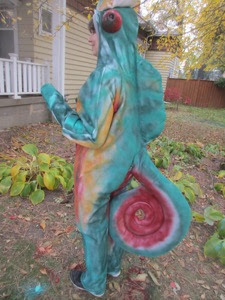 I was a bit bogged down with Quinn's costume, so I told her we could do it if we split the work: I would sew the basic outfit in white, and she would paint it.

We started with our standard fleece jumpsuit (which at this point I'm pretty fast at). 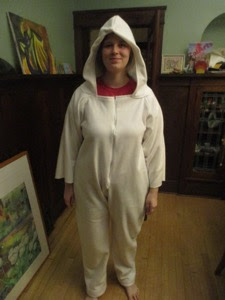 Then I had Aden lay out, pin, and cut out her tail and back hump, which I then sewed, stuffed, and hand-sewed on.  (Hand-sewing those parts was a bit tedious, so I popped in my DVD of Captain America: Winter Soldier to watch for the umpteenth time and stayed up late to enjoy that again while I stitched.) 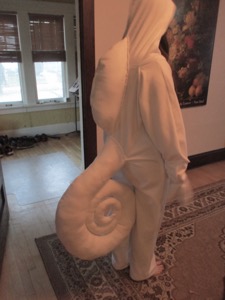 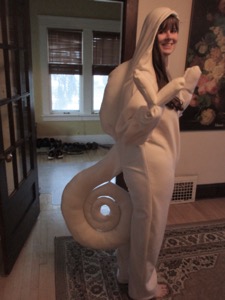 We picked up some spray paint, and the night before Trick-or-Treat (which is always on a Saturday night here) Aden worked on laying down some color.  She had to keep spray painting the next morning to cover everything, but luckily it dried before the evening.  Aden also added a head piece and some eyes made of foam. 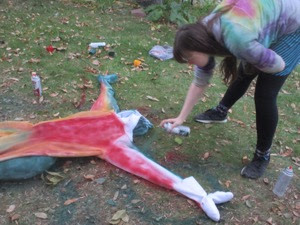 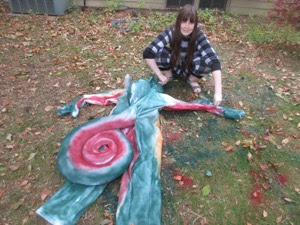 If it hadn't all been so last minute Aden would have added a frill on the front and some small spikes down the back and onto the tail, but overall I think the costume came out pretty nice. 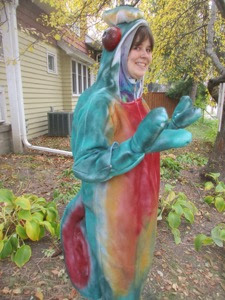 I love that Aden still wants to Trick-or-Treat and dress up.  She had reservations about it a couple of years ago, feeling it was inappropriate at her age.  I'm glad she's over that.  I prefer teenagers who are creative and playful over those who are determined to appear cool at all costs.  My kid actually is cool.  Cool as a chameleon.
Posted by Korinthia at 11:02 AM