This is officially the most labor intensive costume I've been asked to do yet.  But I think it came out looking good! 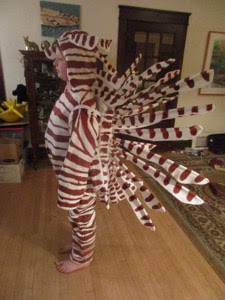 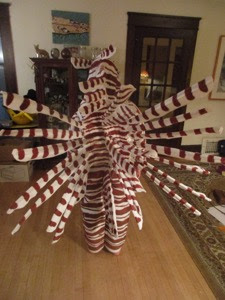 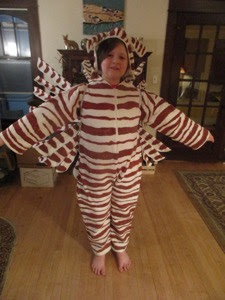 When I asked Quinn a few months ago what he wanted to be for Halloween there was a deceptive pause in his answer that gave me hope for a simple costume this year.  He said, "I want to be a lion... fish."  A lion would have been easy.  My mind went to a couple of elements I could use to make it cool and knew I could knock it out in about a day.  But then the word "fish" came into the picture and I realized, no, this was going to be a challenge.

Luckily I like a costume challenge!  Which is good, because there was a lot of trial and error in this outfit, and I'm glad I started it at the end of September.

(In case you don't know what a lion fish is, check out this video we referenced.  They are an invasive species in many places, and don't have natural predators, but watching them just get nabbed so easily and then stuffed into a tube was surprising to us.  Personally, we're not sure why they weren't named "tiger fish" which seems more appropriate.)

I began with a basic white jumpsuit with a hood the way I usually do.  Quinn didn't want a mask or to fashion a special fish face, so that was helpful.  I originally pictured attaching all the spines to the outfit itself.  I bought a bunch of balloon sticks that were long and somewhat flexible, because I was concerned about Quinn bumping into people and I didn't want his costume to be too pokey.  I also figured I could sew strips of fabric to the sides of his costume and hang them from his arms with fishing line like I did with the extra legs on his lobster costume last year. 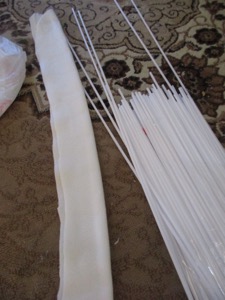 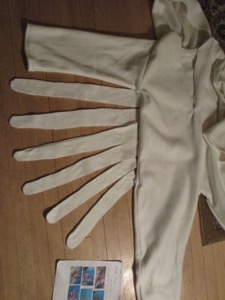 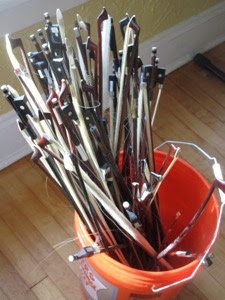 However, the balloon sticks proved to not be strong enough under the weight of any fleece, and I was going to have to construct a sort of "backpack" of spines out of something sturdier that he could take on and off as needed to get into a car or sit in a chair.   We took a trip to the hardware store to look around for inspiration, then while looking at sticks it occurred to me that, wait, I have PLENTY of sticks.

I have a large supply of old bows (mostly from the rental program) that are warped or broken or damaged in such a way they are beyond bothering to repair, so we stopped at the violin store and grabbed a bucketful.  Quinn sawed off the tips (which I plan to collect into a punny "tip jar" for my counter) and I fanned the bow sticks out through pieces of cardboard, and then mounted those to the backpack. 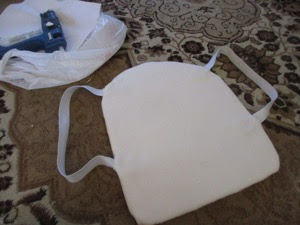 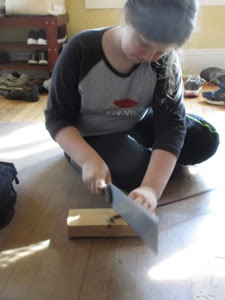 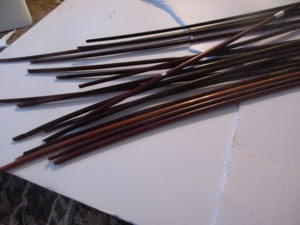 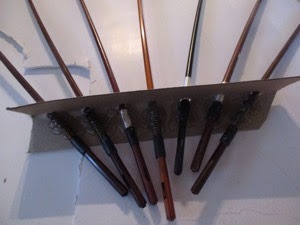 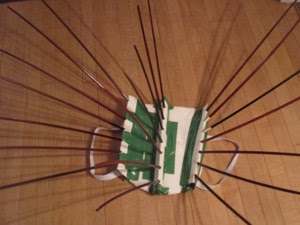 Then I discovered the extra fin pieces under the arms were too floppy so I had to cut them off and rethink them.  Eventually I went with a few smaller strips that were reinforced by balloon sticks, but then realized with those attached to the arms Quinn couldn't put on the backpack.  I ended up making the group of side fins detachable at the arms with Velcro so he can still get the backpack on and off. 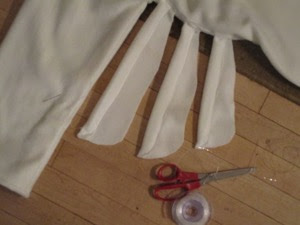 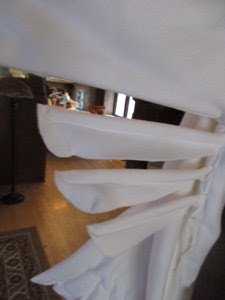 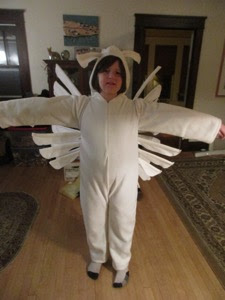 The tail and the extra spines attached to Quinn's head are filled with upholstery foam so they look rigid but are soft.

Originally Quinn wasn't happy about his tail because he wanted it to be made around his legs and feet, but he also likes things to be accurate, and a lion fish tail would flare out from front to back.  Side to side like a dolphin would be doable because the tail would look sort of split when he walked, but essentially still one tail, and it wouldn't interfere with his being able to walk.  Front to back?  The only way I could see to do that that wouldn't look like two tails and not trip him up was to make a kind of skirt, and that skirt would have to be rather large to accommodate his legs enough, and lion fish tails are not that big.  (I even brought in Mona for a consultation on this to make sure I wasn't missing something, but she came to the same conclusions and assured Quinn she liked his tail and nobody would be troubled that he had legs that would blend into the body or seem vaguely like extra spines.)

Once the costume was completed "in the white" we talked about how to add all the stripes.  We went with paint, and wound up buying both brown and red to mix together for a good color match.  PAINTING TOOK FOREVER.  It's not that painting itself was hard (although it wasn't easy to do on fabric), but drying time became a factor in making progress.  Any section we did had to sit for about 24 hours before we could safely flip the costume or move it to do some other area.  Quinn and Mona started work on the legs while we were at the cottage recently.  Once we came home I ended up doing a bit more each night after various rehearsals and events before I went to bed.  Quinn got to finish the last few stripes himself up on the hood and the sides of the backpack. 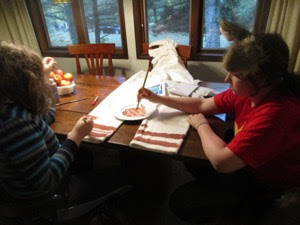 If I had to do it again I think I might make the stripes out of fabric.  It would take a long time but look cleaner.  I debated with Aden's snowy owl costume a couple of years ago about using paint, but was pleased with the final look of fabric for all those black feather details.  Doing stripes that way I probably would have burned off the tips of all my fingers with the glue gun, though.  I had been worried about Mona doing a lot of work with the glue gun (that's how most of that ostrich costume is held together) since she was getting so many little burns that maybe she was doing something wrong, but no, putting the spines together I realized that's just a hazard you get used to.  I had blisters on my fingers at a mandolin orchestra rehearsal that made it a lot less fun, so in future I will try to remember to schedule glue gun work for better days. 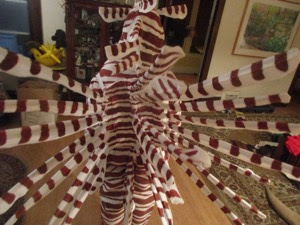 I can now say I have successfully made a lion fish costume!  And Quinn is happy with it, so I'm pleased.  We are interested in seeing what people will mistake him for during Trick-or-Treat, because no matter how good the costume someone just gets it wrong every year.  (The biggest head shaker to the kids was when Aden was a dragon with two horns, and someone asked if she was a unicorn.)  Can't wait to see what Quinn wants to be next year!  Whatever it is, I think I'm up for it. 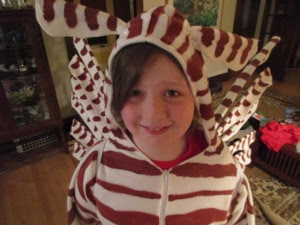