The Tooth Fairy may have to just move in (Babble)

Mona has been losing baby teeth left and right lately, and showed me another loose one this morning.

This was Mona back in July with a mouth full of teeth: 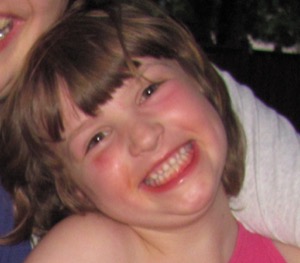 Then suddenly four of them were loose at once and there was much wiggling of teeth going on for several weeks.  Then it seemed like every day for awhile she was handing me another tooth.  She lost one at choir (I think while waiting in line for the drinking fountain, although it’s much more exciting the way Mona tells it), and she lost one at school and someone in the office put it in a tiny treasure chest for her so she wouldn’t misplace it before she got home. 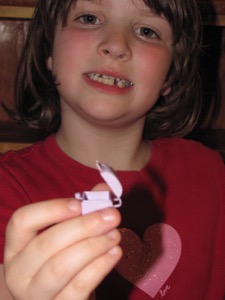 Then a she lost another tooth on top during dinner and was left with one tooth sitting by itself in front for a couple of days.  I really wanted a picture of that because it was particularly adorable, but I didn’t get the chance.  The morning of picture day at school Mona lost that tooth while getting dressed.  It’s looking pretty vacant there in her mouth at the moment, but you’d be amazed how little it affects her ability to munch on carrots. 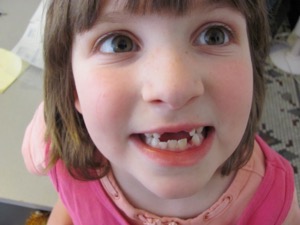 So we’ve had lots of visits from the Tooth Fairy lately.  Best Tooth Fairy advice I ever got (in case you haven’t had the chance to do this yet in your own home and need ideas) is to put the tooth in a plastic baggie before putting it under the pillow.  Makes it very easy to find in the night.

I don’t know what other people currently do for Tooth Fairy gifts under the pillow.  I should ask around on the playground one of these days, but I suspect most people put money there.  I thought long and hard about what the Tooth Fairy should bring when Aden lost her first tooth because I knew it would set a precedent for many years to come.  She was five, and money just didn’t seem interesting enough, especially since she didn’t have a good concept of it.  I couldn’t imagine what she would do with a dollar if she found one under her pillow.  Anyway, I decided to go with little toys.  At the time Aden was heavily into all things Pokemon, so she would get little Pokemon keychains and figures and she liked the added thrill of not knowing for sure what she would get when she went to sleep.

I keep a box in my room of cute little toys (mostly Littlest Petshop things which are what both girls like best at the moment) just in case.  Which is good, because the night Mona lost her tooth at choir I had rehearsal, so I didn’t find out until I got in at 10 at night and there was a post-it note from Ian in the living room letting me know I needed to slip something under Mona’s pillow before coming to bed.  The funny thing is that I usually end up sticking the baggie with the tooth in it into my top dresser drawer, and now every morning I rummage through all these bags of teeth while looking for socks and underwear.  That’s not something I would have pictured myself doing before I had kids.

My children are very serious about the Tooth Fairy.  Mona sometimes holds onto her tooth for a few days, debating whether or not a new toy is better than an old tooth.  Sometimes I even let them keep the tooth and still get the prize, as long as they write a note to put under the pillow explaining the situation.  I ask Aden from time to time if she’d rather the Tooth Fairy start bringing her money, but she still likes the toys.

We’ve had a couple of dramatic moments when the missing tooth disappeared before it had a chance to go under a pillow.  Aden once lost a tooth on a trip to New York, and we thought it fell out of her luggage during a transfer at the Detroit airport.  I had Aden write a note to the Tooth Fairy, and the Tooth Fairy (whose handwriting looks strangely like mine) wrote her back to say all was well, she found the tooth in Detroit, and Aden could still have a prize.  Of course, Aden searched her luggage more thoroughly afterward and did find the tooth, and she wanted to know why the Tooth Fairy would return it.  I told her I had no idea, and did we really want to speculate on what was reasonable behavior from someone who collected other people’s teeth?  Aden knows better than to look a gift fairy in the mouth and let it go.

I like the Tooth Fairy ritual.   It’s one of the few things about parenting that is pretty much the way I imagined it back when I tried to picture what it would be like to have kids.  Most of parenting is nothing like I imagined.  Parenting for real rather than in theory is just more of everything than I expected.  It’s harder and easier and better and worse than I could have known.  But a tooth under a pillow?  It’s just as weird and fun as it was when I was a kid hoping to find a quarter in its place the next morning.  (I just hope Mona manages to keep a few in her head so that she’s not gumming her food by Thanksgiving.)
Posted by Korinthia at 11:13 PM