Pumpkins!  I love pumpkins.  I even love just saying the word ‘pumpkin.’  I have yet to learn how to actually cook a pumpkin, but I make good roasted seeds, and this year for the first time the kids ate some with me instead of sucking on them for a moment and spitting them back out.

This year I also invested a couple of dollars in one of those little carving kits they sell at the grocery store.  Normally I gut all the pumpkins and have the kids draw where they want me to cut the faces out, but it was nice this time to have a couple of harmless mini-saws for the girls to use.  Aden and Mona did most of their carving themselves and only had me help out when something wasn’t going right.  Quinn simply pointed to where on his pumpkin I should carve and told me what he wanted. 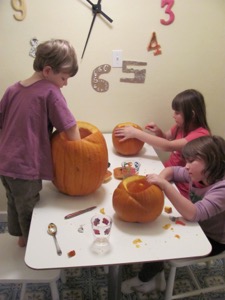 I know people do astonishing and creative things with pumpkin carving anymore, and I like seeing what some of them come up with every year, but for myself I have no interest in doing anything elaborate.  I like to make a basic Jack-o-lantern and stick a candle in it.  Maybe I carve enough with wood that I don’t have a carving itch that needs to be scratched by going all crazy cutting up a squash, or maybe I have old fashioned tastes, but a couple of eyes, a nose, and a mouth and I’m good.

In past years I’ve had to spend a lot of time explaining to Mona that I couldn’t cut out the dozens of tiny teeth she always drew on her pumpkins.  But this year she was only limited by her own abilities, which are apparently greater than mine at cutting tiny teeth, so her pumpkin came out exactly how she wanted it. 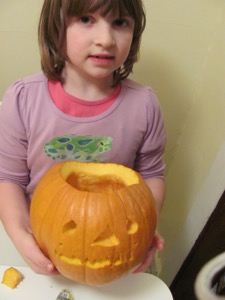 Quinn wanted his to look sort of surprised and scared.  He ended up taking the little piece that came out when I carved the nose and putting it back into the hole backwards, so it sticks out like a real nose.  He calls it a 3-D nose.  This is him trying to imitate his pumpkin while posing with it for me: 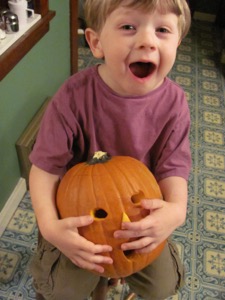 Aden and I both went for scary angry looking faces, and I thought it was funny how similar they seemed when we were done and showed them to each other.  (Mine’s the big one and Aden’s is the little one peeking out from behind it.)  Anyway, I like when all the pumpkins are lined up, because it looks like Quinn’s is scared of the rest.  (Or scared of the dull knife on the counter–either way.)

We’ve had ridiculous wind storms here for the past couple of days, so the pumpkins are the only decorations we dare put out that we’re pretty sure won’t blow away.  I’m hoping the wind dies down enough soon that the kids can do more.  I put Aden in charge of hanging skeletons and the like however she sees fit this year, so I hope she actually gets the chance.

And this year Ian is home for Halloween.  That’s an anniversary I don’t like to miss, so it means a lot to me that he will be here.  He can help me solve my annual dilemma of whether it’s better to buy candy for handing out that we like to eat ourselves, or don’t care for.  (Maybe one bag of Snickers mixed in to snack on from our own bowl and the rest can be Smarties….)
Posted by Korinthia at 10:58 PM