A Dragon, A Blue Jay, and a Dog Named Spot (Babble)

Costumes!  I actually finished all my kids’ Halloween costumes in time!  And not just in time for Halloween (which, sadly, doesn’t mean anything here on the real day*), but for my girls’ choir rehearsal where they were allowed to wear costumes, and the school dance which happened mid-week before school let out for a four day weekend, for a small neighborhood party, and finally Trick-or-Treat on Saturday night. 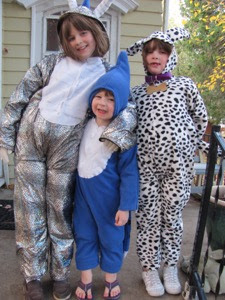 It’s worth all the effort I put into making their costumes myself because it’s not just for one day.  They wear them for all the little seasonal events, then they wear them around the house, to birthday parties, the store…. They make up excuses to be in costumes like coming up with plays, or just decide life is better as something non-human for an afternoon with no attempt to justify it.  They wear their costumes for years, so I have to make sure they are washable and sturdy.  Mona’s giraffe costume was practically in shreds by the time I convinced her to let me retire it.  So I don’t mind the work of getting those costumes done because the kids certainly appreciate them.


I finished Mona’s costume first.  She wanted to be a dalmatian, and it worked out well.  She picked out black gloves at Target for her paws, and the final touch was her tag to put on her collar.  I just cut out some cardboard in the shape of a bone and spray painted it gold, then wrote ‘SPOT’ on it and added a small heart (per careful instructions).  From a distance her tag looks kind of like a bow tie, but she’s happy with it.  That girl makes a cute dog, romping around and barking.  And this relates to nothing in this paragraph, but I need to mention that Mona’s latest new expression is, “Quiet as a moth.”  I love ‘Quiet as a moth,’ especially since Mona isn’t. 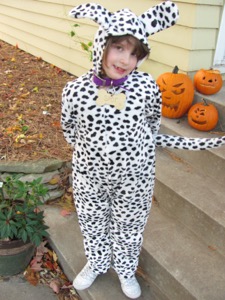 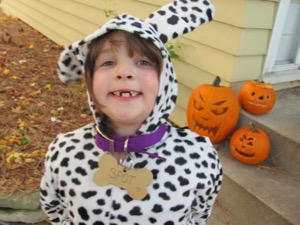 Quinn had his heart set on being a blue jay for months.  His costume is particularly cozy and warm so he likes hanging out in it.  One of the most adorable things I have ever seen in my life is Quinn flapping around in his blue jay suit saying, “Tweet tweet!  Tweet tweet!”  (Before he headed out into the neighborhood with his pumpkin basket I suggested he could say “Trick or Tweet” but since I stayed back at our house to hand out candy I don’t know if he actually did.)  It makes me want to scoop him up and nuzzle his neck and tell him not to grow anymore.  How was he just a baby five minutes ago and now he’s this three year old who can read and jump on one foot and pretend to be a blue jay?  When I tell him he needs to go back to being a baby he laughs and says, “My age can’t go lower!  It can only go upper.”  I guess I don’t really want him to be a baby again, but I’m shocked sometimes at how fast it all goes.  I just want to hold onto the blue jay moment as long as I can. 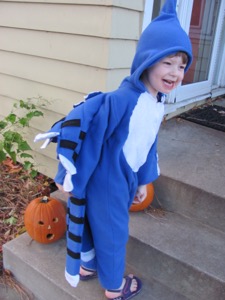 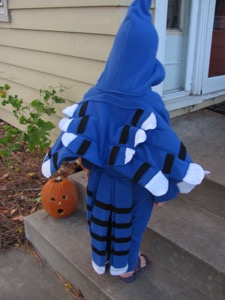 And speaking of kids growing up fast, I can barely reconcile in my mind that Aden was once that tiny baby who taught me how to be a mom.  I asked her what she currently wants to be when she grows up and her list was interesting.  She wants to be a chemist since she’s curious about elements, a paleontologist, a baker, a barber, a person who works at the humane society, an artist, she wants to help me at the violin store, write a blog, and be a mother.  I told her she’s already an artist, and she can write a guest post for my blog whenever she likes.

Anyway, her dragon costume turned out to be more difficult than I anticipated and I’m glad I left as much time for it as I did.  I started out making the basic costume out of fleece, and then I figured I’d just sew the flimsy holographic scale print material she picked out over the top of it.  But I didn’t realize that I wouldn’t be able to do that last part on the sewing machine and ended up having to stitch most of it by hand.  I cannot tell you how sore my fingers were from pushing that needle for a day and a half, but Aden would come hug me periodically and tell me how much she loved her costume so I didn’t mind it (much).  I just set myself up with a marathon of competitive cooking shows on Hulu and sat and sewed and occasionally made Aden try her outfit on to make sure I wasn’t slowly stitching myself into a proverbial corner.  One problem I kept running into was that the costume didn’t move the same way with the second layer of fabric on it, so even though, for instance, there was good freedom of movement in her arms in just the fleece version, they got more restricted when I added the scales.  Oh well.  I also ran out of time for adding wings which she really wanted, but there are limits and my fingertips reached them on Monday. 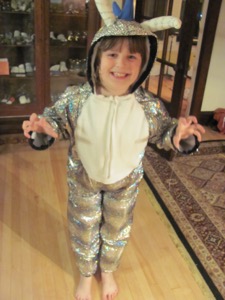 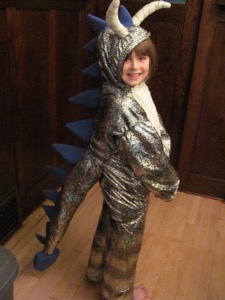 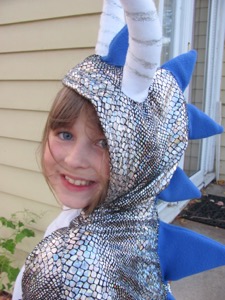 Aden actually helped with some of the sewing.  She’s interested in learning to use the machine, so I had her thread both the bobbin and the needle for me a few times, and even let her help sew simple areas like the legs.  She put the foam in all her spikes, and painted the lines on her horns and her belly herself.  I have a feeling next year her costume will be much more of a joint effort. 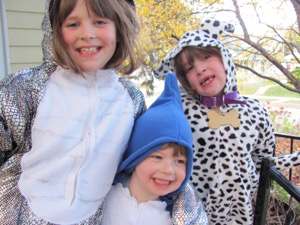 If I had it to do over there are a couple of things on the dalmatian costume that could be better, I’d stick with how I did the blue jay, and the dragon I would approach in a way that didn’t mean essentially sewing the whole costume twice, but overall I’m happy with this year’s effort.  But the important thing is the kids are, too.  The true test of their appreciation will be if they share any Kit Kats they collect!  (I already know they will.  That’s why making costumes for them isn’t a chore.)

(*  So, why, you may want to know, does the actual Halloween not mean anything?  Because Milwaukee uses a system for always having trick-or-treat in the daytime on the last Sunday of the month.  Which would mean something this year, except that Bay View, which is our little corner of Milwaukee’s south side, has switched to night time trick-or-treat on the last Saturday of the month.  The first year Bay View switched to night time trick-or-treat it was confusing because our specific block fell on the boundary, and we ended up doing both daytime and night time trick-or-treat which made my children very very happy.  When I lived in Columbus, Ohio, they had an even more confusing system for trick-or-treat so that it couldn’t land on Halloween proper for some reason.  I grew up in the Detroit area, where trick-or-treat was on Halloween and always at night.  That just seems right to me because it’s what I did as a kid.  Of course the night before Halloween Detroit has problems with people setting things on fire for fun, so some traditions I’m fine with letting go.  But trick-or-treat should be on Halloween.  And at night.  And on Halloween.  You know what we’re doing on actual Halloween?  Putting on costumes and visiting the frog exhibit at the Public Museum.  –sigh– )
Posted by Korinthia at 10:49 PM