It’s almost Halloween!  I love Halloween.  And as one of those annoying moms who likes making costumes from scratch, I’ve been busy.  I don’t really sew, I just kind of make things up, but I do have to make my kids’ costumes from materials that can withstand multiple trips to the washing machine because they wear them until the costumes literally either fall apart or can’t be squeezed into anymore.  (They all still wear their kangaroo costumes from two years ago, even though the cuffs on the legs are now up to mid-calf.)
Last year Aden was a grey horse, Mona was a trumpeter swan, and Quinn was a purple cat.  This year the girls each changed their minds about a dozen times before Aden settled on wanting to be a dragon and Mona a dalmatian.  Quinn decided months ago that he wanted to be a blue jay.  I have no idea why any of them picked the things they did.  I’m not completely done, but two out of three of the costumes are essentially ready and I plan to tackle the last one (the dragon) this weekend.

I decided to do Mona’s costume first because it was the most straightforward.   The trickiest thing, honestly, was finding white fabric with black spots that wouldn’t make her look like a cow.  Everything in our local fabric store looked like cow spots (insert joke about living in Wisconsin here), and I didn’t want Mona having to tell people she was a dalmatian over and over.  (There was a little boy who came to my door last year dressed as Peter Pan who everyone, including myself, mistook for Robin Hood, and he looked so sad about it!  I put a high priority on trying to make costumes as recognizable as I can.)  I ended up ordering some fabric on eBay that looked dalmatian-like.

Since I don’t use a pattern I just have my kids lie down on the material and I trace them.  Mona is about as patient as your average six-year-old, which is to say, not very.  She spread herself out on the fabric the first time I asked, and when I had the pieces cut out and needed her to lie down again she sighed and said, “Oh, I’m so glad this is almost done!”–not realizing at all how much was left to do. 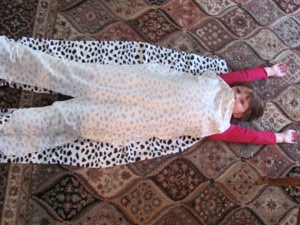 (Mona during an early ‘fitting’)


Anyway, Mona’s costume came out pretty cute.  She’s mostly excited that we bought a real dog collar at the pet store for her to wear with it, and this weekend I’m going to make some kind of dog tag with her name on it to attach to the front.  Here’s the finished dalmatian: 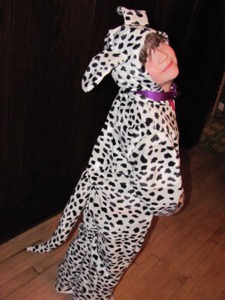 The next costume I worked on was Quinn’s.  We had a day last week where I kept him home from school and I did the bulk of it then.  (He’s been having a bit of a rough time with getting up early for school and not eating before he leaves, etc., and I think he needed a break.  Plus I miss him, and I figured skipping one day of scooping rice the Montessori way was not going to set him back academically in the long run.  I asked him at lunch how he liked playing hooky, and he looked interested and said, “How do you play it?”  When I explained it meant not going to work or school when you were supposed to he said in a shocked voiced, “There was school today?!”  So I guess we won’t be doing that again soon, even though we did have fun.)

Making a blue jay costume wasn’t as hard as I thought it was going to be.  I figured as long as I got the black stripes and the white feather tips right, people should be able to tell he’s a blue jay.  I used some upholstery foam left over from a chair cushion I worked on over the summer to pad the wings and the tail.  Quinn refuses to wear the beak I made, insisting his nose is the beak.  He looks really adorable flapping around, but he won’t pose for a decent picture so you’ll have to get the idea from these: 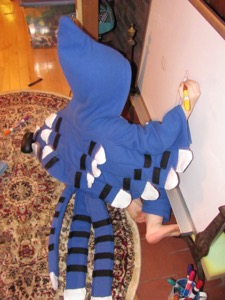 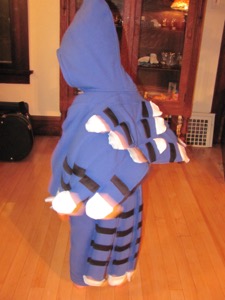 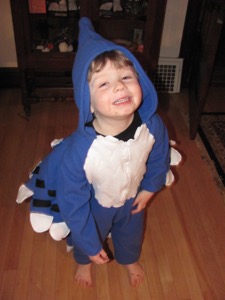 This weekend I dive into the dragon costume.  Aden picked out this really cool fabric we found on sale that is silvery-holographic stuff with a scale pattern on it.  It’s too flimsy to use for any of the structural elements of the costume, so I’m just going to make a basic jumpsuit out of fleece and then baste-stitch the shiny stuff over the top of that.  The really fun thing is that Aden has shown great interest in learning to sew for herself, so we had a lesson last night where I walked her through threading both the needle and the bobbin, and I showed her how to use the pedal and the reverse button.  When I took home economics in Jr. High we practiced by sewing along little maze tracks printed onto sheets of paper, and I asked her if she wanted to try that and she was really enthusiastic.  I don’t see any reason she can’t sew the large basic elements of her costume herself, so I’m going to try to make that happen.  Imagine just how much more proud she’ll be to wear it then!

The two of us made a trip to the fabric store together and brainstormed a bit about how we should make her horns, what color the spikes down her back and tail should be (we went with blue since there is a bunch of it left from Quinn’s costume), and it was really nice.  Especially since the other night we had a frustrating confrontation about how she wasn’t doing several of the things we’d asked her to do.  I explained (AGAIN) that the clutter of toys around her bed was unacceptable because if I needed to get to her in the middle of the night it wasn’t fair to make me also run an obstacle course.  She should want to move the toys because they hurt my feet.  (I’ve always thought those people who walk over hot coals should really make their way along a trail of jumbled legos if they really want to impress anyone.)

Anyway, Aden got a little snotty with me saying that she just didn’t feel like picking the toys up, so I suggested that because I had to use my time doing the things she was supposed to be doing, that with the time I had left I might not feel like making her a costume.  Now her floor is clear and her shoes are away and her backpack is hung up.  I wish I had that kind of leverage more often.

But so far so good.  The Halloween dance at the school is less than two weeks away, so I’m feeling a little ahead of the game for a change.  It’s fun playing with my sewing machine, but I really should get back to working on my new violin.  (I’m tempted now, though, to carve a blue jay into the scroll!)
Posted by Korinthia at 11:18 PM