Okay, so at what point is this officially our cat? (Babble)

I got home after taking the kids to school and going to the Y the other day and there was a message on our answering machine.  A neighbor a few doors down called to say, “Your cat is up in our pine tree and we thought you should know.”  YOUR cat.  Meaning OUR cat.  Meaning there is a cat in the neighborhood that is our responsibility because it belongs to us because it is our cat.  Really?  It had been hanging out on our deck for fewer than five days at that point.  And the neighborhood was referring to it as our cat?  Does that make it so? 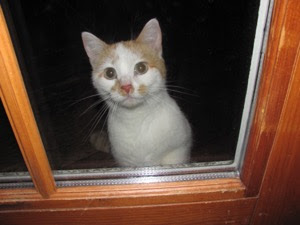 The cat has been living in our backyard since we found it sealed in our deck.  We fed it because we were worried about it.  We’ve posted pictures of it around the block in the hopes that its owner will come get it.  The girls call her Mew-Mew and Quinn calls her Lilly, or sometimes Spotty or Spot (Ian still calls her Spaz but he’s the only one), and Mew-Mew-Lilly shows up in the morning and evening for food, but otherwise spends her days exploring the rest of the street.  She doesn’t seem to let anyone else pet her, but she’s affectionate with us and occasionally comes when I call.  She’s nice to have around, but is she ours?  When does that become official?

Did she become our cat when we fed it?  I feed kids in the neighborhood too, but that doesn’t make them mine.  I turn them loose and assume they go home and don’t feel like they belong to me.  The birds and squirrels aren’t mine if I feed them on my property.  If we stopped feeding it and it continued to live in our yard, is it still our responsibility?  At what point are we wrong if we stop feeding it?  If we decide it is not our cat and stop feeding it after a week I don’t think anyone would fault us, but what about through the winter?  At what point have we been feeding it long enough that we have to arrange to have someone else feed it if we go on vacation?

Is it our cat just because we decide it’s our cat?  What if the original owner finally comes to claim it a day after we declare it to be our cat?  At that point of course we would give it back.  But what about a week after?  Sure.  But a month?  Or a year?  Can someone who didn’t own it before simply announce it belongs to him or her one day?  If the neighbors across the street decided the cat was cute and put a collar on her, would we have any grounds to protest?  What if the cat just started hanging out next door instead?  If we have been calling it our cat do we have a right to scoop her up and drag her back to our own yard just because we want to?  That seems strange.  If we don’t feed it and it only steps on our property from time to time, can it still be considered our cat if it’s in name only?
Is it ours when we provide it medical care?  I would do the same for a bird or squirrel or other wild animal that needed help on our property, but that doesn’t mean any of those animals are mine.  Do I have a right to spay or neuter any animal that wanders into my yard?  (What about putting funny hats on them?)

If we ‘let’ the cat live in our yard does that really make us responsible for it?  If it does damage on someone else’s property is that now our concern, even if we don’t officially lay claim to the cat?  How does that work?  Is there some sort of common law relationship status you can have with a pet where if enough people believe the cat is yours it becomes a legal reality?  Can you really have any control over an outdoor cat?

I feel like the cat is ours if we put a collar on it, and we haven’t.   I’m not ready to say this cat is ours.  I think it would prefer to be an indoor cat and with Ian’s allergies we’re just not going to do that.  My first choice is to figure out where it came from and return her; my next choice is to find someone we know willing to take it in so my kids can still visit her.  My last choice is to adopt the cat as an outdoor pet, but with each passing day that seems to be where we’re headed.

I’ve been looking into what’s involved in keeping an outdoor cat, even though I don’t think it’s a good idea to keep an outdoor cat in the city.  I don’t entirely approve of outdoor cats, especially since one killed our first pet bunny while it was playing in the backyard when we first moved to the neighborhood.  I don’t think it’s fair to have a pet that wanders into other people’s space, and I worry for cats near too much traffic.  I’ve also read enough articles about how many birds are killed by house cats to feel good about knowing I’m somehow contributing to that situation.

In my head, having a pet is supposed to be a clearly defined thing.  You have a pet or you don’t.  If you have a pet you care for it, take responsibility for it, you take it to the vet, you name it, you arrange a pet sitter for it if you go away for any significant period of time, and you promise to do the best you can for it for its whole life or until someone else is officially named its owner.  Our relationship with this cat if it becomes ours would be very different from any of that.  It’s more like a random guest.  Lately we don’t even see it when we put out food.  I don’t know where it is most of the time, and I’m not sure what’s expected of us.  The boundaries are not clearly defined because they have been dictated by the cat.  If the cat’s making the rules, what does that make us?

(This post is dedicated to the Eric Carle book, “Have you seen my cat?” which has to be at the top of my list of the most annoying books my kids have ever requested at bedtime.)
Posted by Korinthia at 11:31 PM

Email ThisBlogThis!Share to TwitterShare to FacebookShare to Pinterest
Labels: cat, deck, Have you seen my cat?, Mew-mew, pets