Check out my son the lobster! 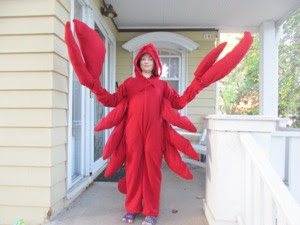 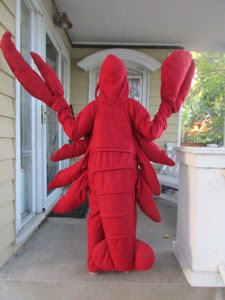 I gave myself a head start on Halloween costumes this year because I knew I wouldn't have a lot of time in October, but then it turns out I only needed to make one costume.

Aden loves being a kangaroo and wanted to just wear her costume from last year again.  In her opinion it is the perfect costume: It has a tail and ears, it's warm, and there is a pouch for collecting candy in.  In fact, she wears it regularly.  She even wore it to Chicago on a recent trip we made to the Shedd Aquarium and people were delighted, one woman even stopping her on the street to get a photo with her.  So anyway, Aden is all set for Halloween (and possibly the prom).

Mona is making her costume on her own, and it's impressive.  I will post about that later when I have pictures.

So "all" I had to do was make a lobster costume.  We wanted to go for a live--rather than a boiled--lobster color, but the closest thing we could find to that sort of dark red at the fabric store was more like purple and it looked weird, and we didn't want to go brown.  So boiled he is, and he plans to carry a pot with him to collect candy, so that will be funny.

We started as we always do with Quinn lying on the fabric so I can trace him.  (The dog always "helps" usually by lying on whatever fabric I'm working with.) 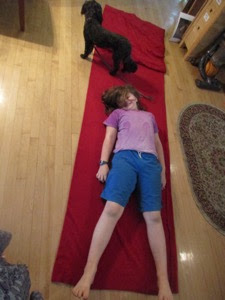 I made a basic body suit, then added a bunch of extra legs that we strung up with monofiliment (fishing line) so they all move together when he moves his arms. 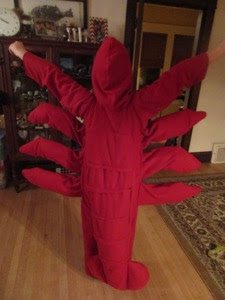 The tail was fun.  But then there were the claws, and those turned out to be tricky.  They are built around salad tongs so he can really make them pinch, and I ended up taping cardboard to those and padding around them with stuffing.  They are a bit unwieldy, but Quinn says they're fine so I let them be.  There are openings at the wrists so if he wants to use his hands he can slip them out and let the claws dangle. 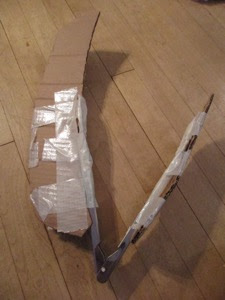 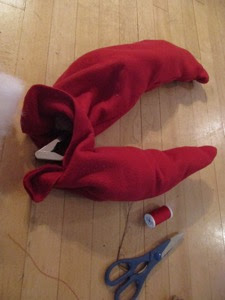 The last little bit was the antennae things.  (Are those antennae?  Or feelers?  Arthropod crazy straws?  Looking at pictures of lobsters apparently didn't teach me that much.)  Quinn wanted them to droop, so they droop, but there are bendable wires in them if he wants them to point a particular way. 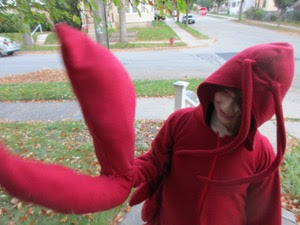 So that's my lobster boy!  He says his goal is to be an animal from every major category (he's been two kinds of birds, he's been mammals, a reptile...) so next year he may go for insect, amphibian, or imaginary.  The sewing machine and I are ready whatever he chooses.
Posted by Korinthia at 12:48 AM