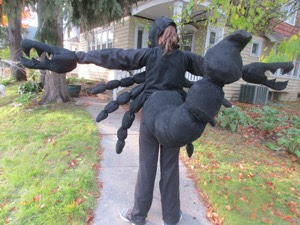 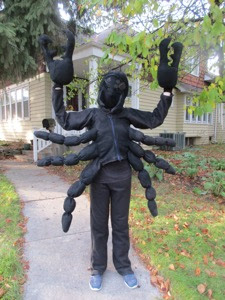 Mona is amazing.  She made her costume almost completely unassisted this year.  She did all the sewing on the machine including the zipper.  She watched me do parts of Quinn's costume (since there were useful similarities) and then copied what I did where it worked, and came up with her own ideas where it didn't.  The only thing I helped with was occasionally unjamming the sewing machine when it acted up, and I hand stitched on all the extra legs for her torso while she was at school to save her a little time.

Honestly, she did a much better job of creating a scorpion costume than I would have.  Her attention to detail is impressive, and she did many things in a way I wouldn't have tried that worked beautifully.

Mona's general process is different from mine.  She stopped at one point to make a model of a scorpion out of paper so she wouldn't have to keep looking up images online.  I love this little figure!  (And she said it really helped.) 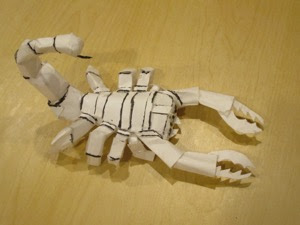 She started with the claws, because that's arguably the coolest part.  She built them around salad tongs the way I did for Quinn's lobster costume, but she added a couple of pasta ladles.  And the girl does wonders with a glue gun. 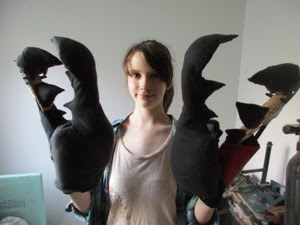 Her tail is particularly well constructed.  It's fleece that's been cinched off with fishing line, and supported internally with cardboard, wooden rods, and sculpted Styrofoam.  It's clipped around her waist like a belt so she can take it off easily to get in a car.  (The straps of the belt are recycled case straps from the violin store.)  She says the tail is really comfortable, and I'm really impressed with how well it stays up when she has it on. 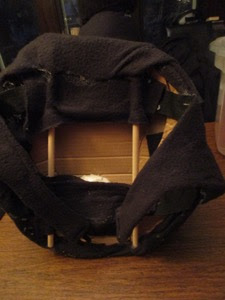 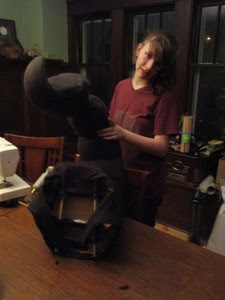 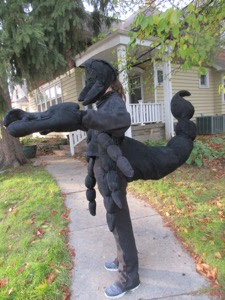 The mask has hidden eye holes made of painted burlap. 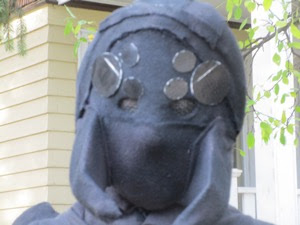 I wish I had pictures of her hunched over, because when we went to the Halloween dance at her school last night she was running around and play fighting with her siblings, and when she lowered herself down slightly so her legs all dangled the effect was really good, especially because the tail started to dart about menacingly.  No matter which way she's standing it's a great costume and I think she should be very proud. 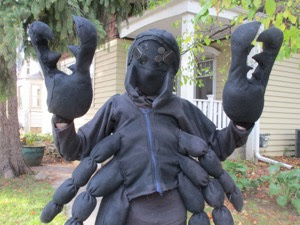 As I type this, the scorpion, lobster, and kangaroo are off trick-or-treating.  (Because it isn't Halloween yet and that's how we do things in Milwaukee for some reason.)  Love my little group, and love that they can take themselves around the neighborhood!

Now I need to get back outside and help my husband hand out candy. 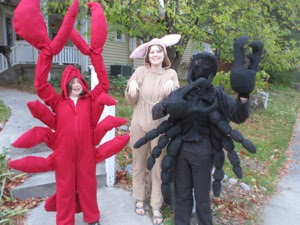 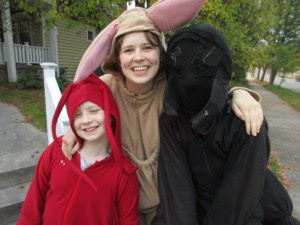 Posted by Korinthia at 5:49 PM