Lighting and Cabinets and Walls, Oh My!

Lots of progress in the kitchen in the past couple of weeks!  We're in the odds and ends phase now, where there is still stuff to build but all the major elements are there.  The back splash can't happen until the counters are installed, there are still holes to plug and a bit of painting to do, and the last steps will be finishing the floors and installing appliances, but at least now it''s all starting to look like a kitchen again.

The last pictures I shared were all of the demolition.  Since then walls went in, and floors. 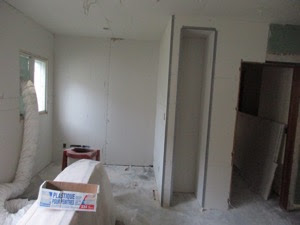 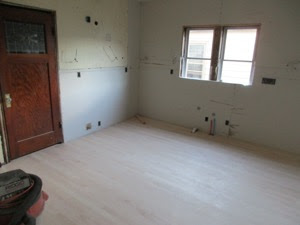 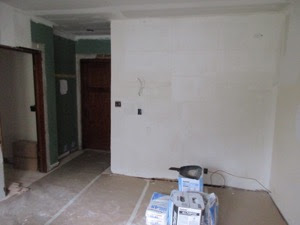 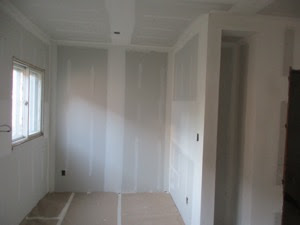 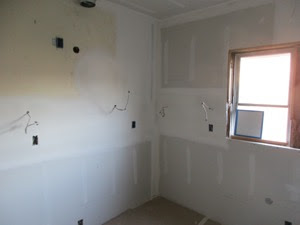 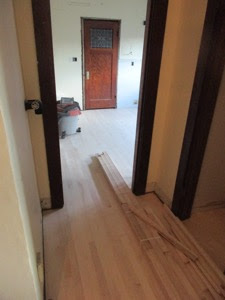 Then the cabinets arrived in boxes.  So many boxes... 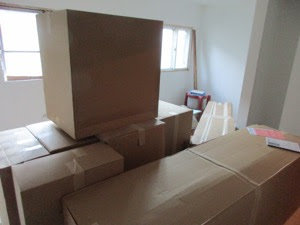 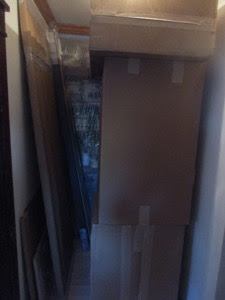 It was funny, too, because on the way home with Quinn that day he told me he wanted to make something with perler beads as a gift for someone, and I told him that was fine because we could just untape the plastic cover in the craft area and reseal it.  But, uh,...no.  I tried to squeeze past the boxes enough to liberate some supplies, but I ended up suggesting to Quinn we sew his friend something instead.


The lower cabinets all went in first, and eventually the upper ones and the new island. 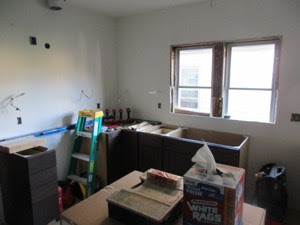 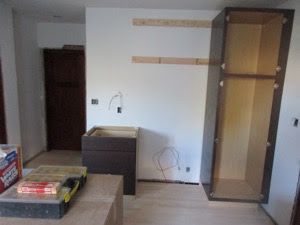 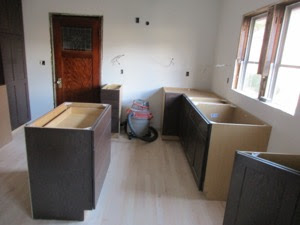 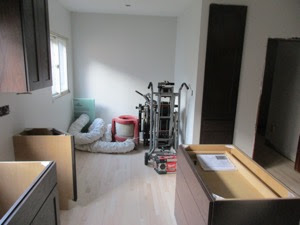 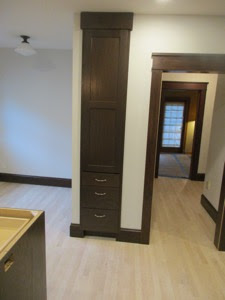 I think my favorite cabinet is the one that is recessed into the wall where the spice rack used to be.  It's going to be just right for storing dishes and the drawers will hold silverware.  That one was just an off the top of the head idea we had when we were talking to the designers when mom and I realized the closet behind that wall could be better used as part of the kitchen space.

And now we have lights!  They added a whole bunch of can lights in the ceiling which are nice and bright.  There will be lights above the counters, we reused all of the old fixtures in new places, and there is a new light for above the island.  (My kids voiced concern that it was too much light, but I told them their dad and I are the ones who have to live the longest with the kitchen and more light as we get older is a good thing.) 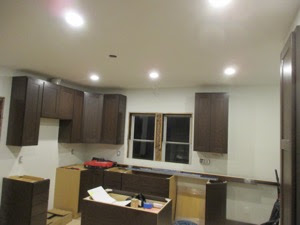 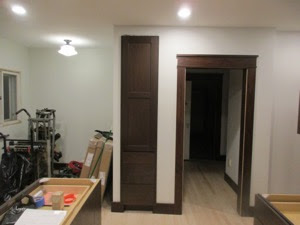 And new windows!  That open!  I can't believe how nice the breakfast nook feels. Between the new window and the removal of the archway it is part of the whole room now, not just a weird tucked away afterthought. 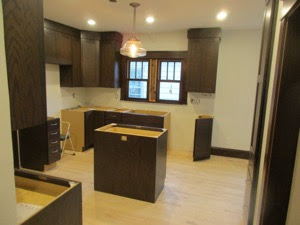 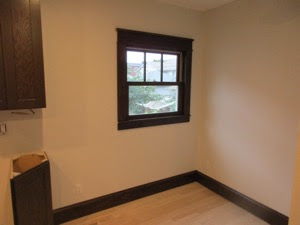 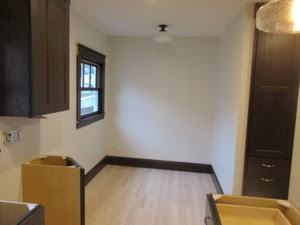 What else... The drawer handles went in.  Knobs for the doors are on the way.  The anti-slam feature on all the drawers and cabinets is great.  Quinn keeps trying to slam things but to no avail. 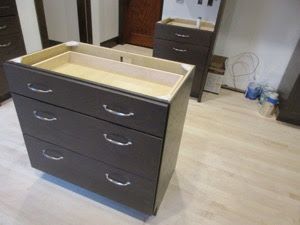 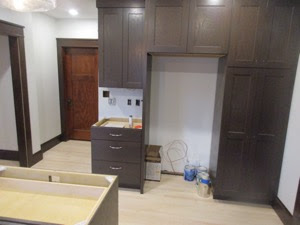 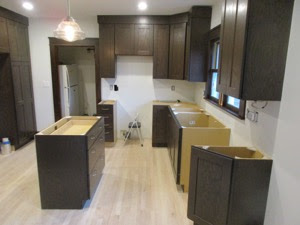 The added bonus to gutting the kitchen has been to move things like light switches, etc.  All the switches downstairs in our house are in weird places--usually at the wrong end of a room from where you enter it, behind a door, or in another room entirely.  The switch for the kitchen light used to be across the room by the basement door, but now in addition to that one we have one right where you enter the kitchen.  So, we'll be able to turn on the light before entering the room.  What a concept.  The switch for the light in the breakfast nook is at the front of the breakfast nook, not on the back wall anymore.  We have outlets everywhere!  And they moved the phone jack to above the small counter next to the fridge, so that will be a big improvement.

Lots of small details are happening, too.  Like, the doorway into the back hall apparently at one time had a door, and when they replaced the frame they also took out the jamb with all the hardware (and differently stained wood) and made it smooth and a match. 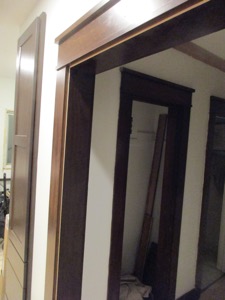 And they took the basement door away to be restained and have the glass replaced.  (The new glass will be clear and a little wavy so it will match the old glass in the door to the dining room.  There are two more doors that are going to be too red for the kitchen, but it was expensive to do them so I plan to just do them myself at some point.  (The one with the glass seemed worth the expense because I can't install glass and that door is a really prominent feature of the kitchen compared to the others.) 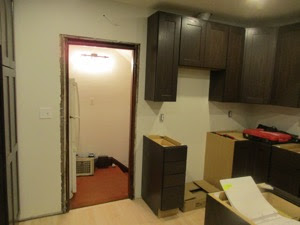 I also asked about matching the crown molding in the back hall that was a completely different color from the baseboards and that bugged me.  The cheaper and better solution was to just take them down entirely and that space along the ceiling will get patched and painted.  Removing the crown molding revealed more ancient wallpaper!  (I can't imagine how busy that small space would have looked with so many stripes.)  To save having to find someone to remove it I just peeled all that off myself this weekend and picked up some glue remover. 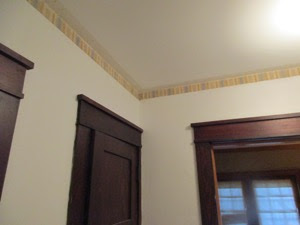 I can't wait for the counter tops to arrive.  They will make a real difference to the finished look of the kitchen and brighten things up more.  After counter tops comes the back splash, the floor finishing, and appliances.  Just a few more weeks.  It's still a wait, but there is a light at the end of the tunnel.  (And that light is in a double oven.)

Each night after work I go and stand in the kitchen and see what is new.  At least one of the kids usually joins me and we discuss ideas for where things will go.  We've decided on racks for the cookie sheets that store them vertically instead of in a pile.  The spices will go on the lazy Susan in the corner cabinet.  On the highest shelf of most of the cabinets we will put cake pedestals (so we can admire them from below but not have to reach them).  The contractor told me we can actually start putting things in the upper cabinets and the pantry, so that's been fun!  Once the counter tops are in we can put things in the lower cabinets, too.

In the meantime we've gotten better about cooking in the dining room on the hotplate, and we have tried several new restaurants.  Next kitchen update will be before and after pictures!  Can't wait.
Posted by Korinthia at 12:02 AM