Lots of busy days recently, but oddly many moments in which to reflect on the passage of time.  Between remodeling the kitchen where we're trying to put in something new that reflects the past, and my oldest baby starting high school, I find myself thinking a lot about where we are now and how things used to be.

Last weekend I got to participate in a wonderful event organized through the VSA (Violin Society of America).  They have a large convention every year, and I will be returning to Cleveland next month for this year's gathering.  But lately they've also been doing smaller regional events.  This recent one happened to be in Detroit, so I jumped at the opportunity to go since I would also get to spend time with my mom. 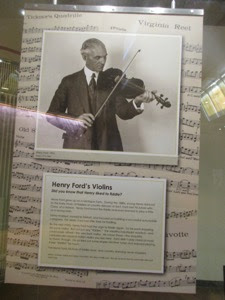 The focus was the collection of instruments owned by Henry Ford.  Apparently he was a fiddler, and since he was also rich he decided to fiddle on incredibly valuable instruments, including two Strads.

We were allotted time to examine eight important violins.  There were armed guards and strict rules about not wearing any necklaces or rings while handing the instruments, and for some reason we couldn't take photographs, so I don't have any to share.  I did get a shot of where the violins are usually displayed, so there's that: 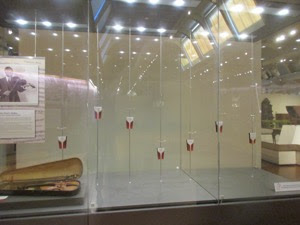 The closest we get to studying with the old masters is to look carefully at what they did and try to emulate it when we can.  It's always exciting to hold a Strad.  There was an Amati in the collection that was stunning, and a Guarneri, and a curious violin played by Maud Powell who was the first American woman to be a successful international violin soloist.  My favorite instrument at this viewing was the 1740 Carlo Bergonzi.  That's not a name people outside of luthier circles usually know, be he was kind of a violin maker's violin maker.  His work is beautiful and precise and rare. 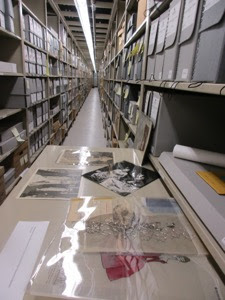 I somehow grew up in the Detroit area without realizing these instruments were at the Henry Ford Museum.  I also didn't know the extent of what the Henry Ford has in general.  We were given a behind the scenes tour of the miles of shelves in the archives, and glimpses of items in cold storage.  It was sort of bizarre, because the goal of the museum is not about high art, but ordinary life, so they have Happy Meals toys and shoes that belonged to the family and letters from Lincoln and quilts and clocks and John Muir's compass and the first Moog synthesizer prototype and monkeys carved from peach pits and Edison's light bulb and it goes on and on and on.  It's a weird juxtaposition of the sublime and the ridiculous all being carefully documented and stored.  On one level it seems important to do so, but on another there is something incredibly weird about seeing a box of Rainbow Brite toys in cold storage alongside wax cylinder recordings made by Edison. 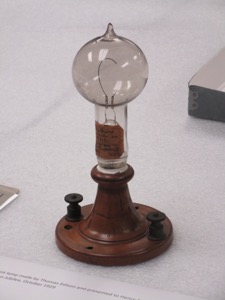 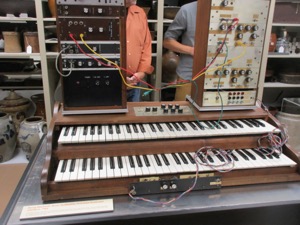 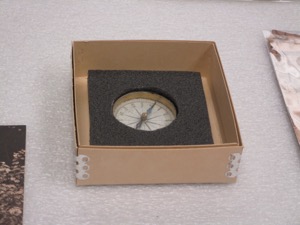 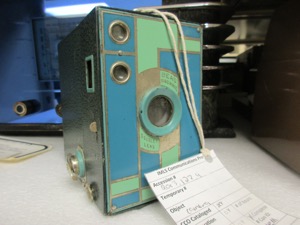 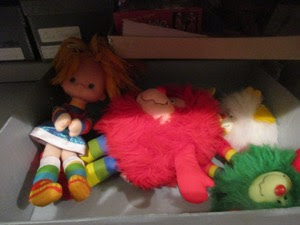 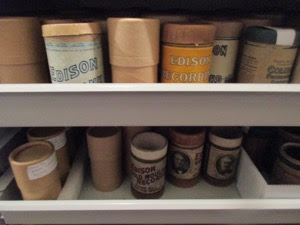 One of the most interesting things I learned was that the maintenance and repair work they do in the old world sections of Greenfield Village is all done with period tools.  They have one set of chisels and saws, etc., that they keep preserved, and other sets that are in active use.  I can't tell if this is reassuringly authentic or pointlessly inefficient.  As much as I think it is useful to try to walk in the footsteps of the master violin makers to learn as they did, I also think Mr Stradivari would have loved having a bandsaw.

There were some good lectures, the chance to chat with other violin people, and we also got to visit a few other maker's shops in Ann Arbor.  It's always interesting to see how other people work; the variety of spaces and how they were organized was fascinating.  It's also just a pleasure to spend time with other people in your field when what you do is generally isolated.  Violin makers are an odd group, but they are my odd group.

I also got to take a more personal history tour of Detroit while I had a day with my mom.  We had breakfast downtown and she took me past areas where there has been a lot of change, and no change at all. 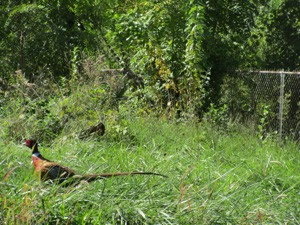 Detroit remains peculiar.  It's both vibrant and devastated.  There are fields where houses once stood before the riots of '67, and pheasants and foxes run there.  There are fabulous structures that have been neglected to the point of ruin and others that have been magnificently restored, and they exist side by side sometimes.  Stretches of downtown where they once put up facades to hide abandoned buildings are now filling in with actual businesses.  The light rail construction seems to be (literally) on track.  Wayne State University is looking better than ever.  Highland Park is still a mess.


One of the most encouraging things was Belle Isle.  The city couldn't afford to take proper care of it, and there was concern it would be sold and be developed privately, but instead the state took it over and it's having a revival.  The grounds are looking lovely, lots of people were out and about enjoying the park, and the aquarium is open again.  I was so sad when they had to close it, but it's back now and open on the weekends.  I've always loved the tiled ceilings that make you feel as if you are underwater. 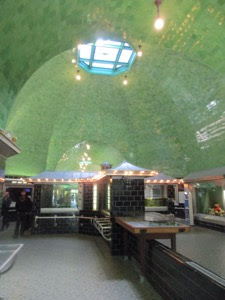 And mom took me by the buildings of her early days in the city.  I saw her first apartment, and a home after that where she used to look down from the second floor and watch people in Indian Village play tennis.  There was the building where she had her job in advertising (at a time when most firms still openly declared they didn't hire women).  The building where my parents first opened their art gallery still looks pretty nice. 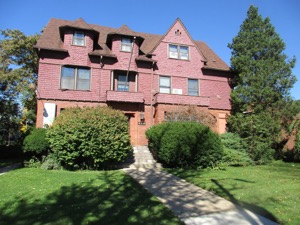 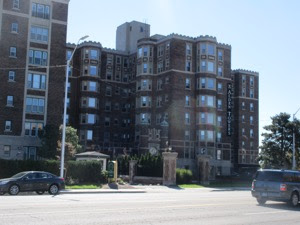 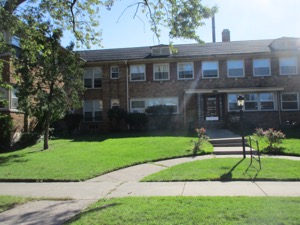 Up farther north in Palmer Park mom took me by the apartment building where she and dad lived when they were first married.  That area is interesting because some of it has been restored to its former glory and looks amazing, but again there are large buildings mixed in that are a wreck.

I'm not a fan of "ruin porn" because I think Detroit deserves better than to be gawked at for amusement, so I didn't take pictures of things that were burned out or run down, but I did get a picture of the house I lived in until I was three.  It's in Detroit proper, but I didn't realize it was only about two and a half miles from the house in the suburbs of Oakland County where I grew up.  It's on a street where there are well-tended homes interspersed with ones that are abandoned.  My old house, where I still have faint memories of sitting with my dad on the stoop, has not fared well.  The windows are all smashed and the cute little yard where my mom planted her garden is all overgrown.  It's sad.

Sometimes the past is better.  Often things are better now.  Either way, the ebb and flow of everything over time is fascinating.  I wonder a great deal about what places and objects will matter to my kids in the future.  We joke once in a while about how they can't distort their memories of what their first house looked like since we look at it directly across the street from where we are now.  What sites will they want to go see when they are older?  What will they think is important to show their own children?  What will our neighborhood be then?  Who will they be?

I don't really want to know the future.  But there are times I'd like just a peek.